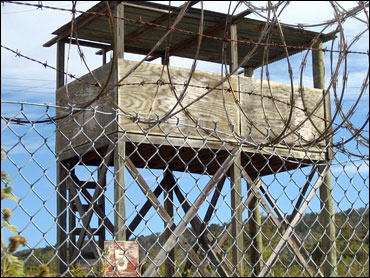 President Bush says he would like to close the detention center in Guantanamo in Cuba, but is waiting for a U.S. Supreme Court ruling on whether inmates can face military tribunals.

"And we're waiting for our Supreme Court to give us a decision as to whether the people need to have a fair trial in a civilian court or in a military court," he said in a transcript released Sunday.

The Bush administration has been criticized for the open-ended detention of people captured in the war on terrorism and for alleged interrogation techniques used at the camp that holds about 500 "enemy combatants" at the facility on the southeast corner of Cuba.

In February, United Nations Secretary-General Kofi Annan said the U.S. should close the prison at Guantanamo Bay for terror suspects as soon as possible, backing a key conclusion of a U.N.-appointed independent panel.

The 54-page report summarizing an investigation by five U.N. experts, accused the United States of practices that "amount to torture" and demanded detainees be allowed a fair trial or be freed.

But, as CBS News correspondent David Martin reported then, White House spokesman Scott McClellan rejected the call to shut the camp, saying the military treats all detainees humanely and "these are dangerous terrorists that we're talking about."

Hundreds of people suspected of ties to al Qaeda and the Taliban, including some teenagers, have been swept up by the U.S. military and secretly shipped there since 2002.

The Supreme Court case mentioned by Mr. Bush was the case of Salim Ahmed Hamdan, a Yemeni who once worked as a driver for Osama bin Laden.

Hamdan has spent nearly four years in the U.S. prison at Guantanamo, and the Supreme Court has been asked to decide if he can be put on trial with fewer legal protections before a type of military tribunal last used in the World War II-era.

The Supreme Court is expected to decide in June whether military tribunals can hear the cases of the detainees.

Mr. Bush said in the interview with ARD on Thursday that either way the court rules, "they will get a trial which they, themselves, were unwilling to give to the people that they're willing to kill."