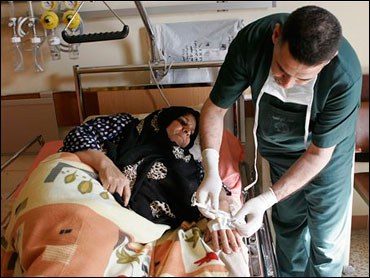 A suicide bomber struck tribal leaders touring a market in a Sunni area west of Baghdad on Tuesday, killing as many as 33 people in the second major attack in the capital area in two days.

The bombing was part of a spike of violence that comes as the U.S. military begins drawing down its forces.

The bomber detonated an explosives belt as the tribal leaders were walking through the market in the town of Abu Ghraib, accompanied by security officials and journalists, according to the Iraqi military.

Two Iraqi television journalists were among those killed in the attack and one was wounded, according to their stations.

On Sunday, a suicide attacker killed about 30 people near a police academy in east Baghdad.

The high-profile attacks have marred Sunday's announcement by the U.S. military that 12,000 American troops and 4,000 Britons will be withdrawn from the country by September - the first step in fulfilling President Barack Obama's pledge to end America's combat role by 2010.

U.S. troops are to leave the cities by the end of June, and the attacks raise questions about whether Iraqi security forces will be able to cope with the persistent violence.

Iraqi police in Abu Ghraib and an Interior Ministry official said the tribal leaders were hit as they left a reconciliation meeting at the district council's office.

Such meetings between Sunni and Shiite sheiks have become common as the Iraqi government tries to promote reconciliation between the Muslim sects after years of sectarian violence that pushed the country to the brink of civil war.

The officials, who spoke on condition of anonymity because they weren't authorized to release the information, said 33 people were killed and 46 were wounded.

But the Iraqi military spokesman's office said 28 people were killed and 28 wounded.

Conflicting casualty tolls are common in the chaotic aftermath of bombings.

The private TV station al-Baghdadiya said two of its journalists were killed in the blast, while Iraqi government television said one of its correspondents was wounded.

A suicide bomber also killed 30 people in east Baghdad on Sunday, the same day the Americans announced they're withdrawing 12,000 U.S. troops and 4,000 British forces by September.

The officials spoke on condition of anonymity because they weren't authorized to release the information.

The Iraqi military's press office confirmed there was a suicide bombing but did not give casualty figures.

Meanwhile, Iraqi security forces prevented a demonstration in central Baghdad Tuesday by relatives and supporters of the journalist who threw his shoes at then-President George W. Bush.

An army officer ordered Muntadhar al-Zeidi's brother, Dargham, to call off the protest in Firdous Square because he had no permit.

The brother argued that he had submitted a request four days ago but received no response.

Several dozen people had gathered Tuesday for the rally but dispersed peacefully.

Al-Zeidi was arrested in mid-December for hurling shoes at Bush during a joint news conference with Iraqi Prime Minister Nouri al-Maliki.

His trial began last month and is due to resume Thursday.