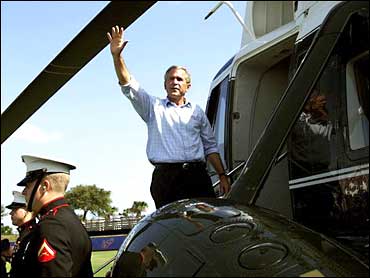 Democrat John Kerry sought to undercut President Bush on national security Saturday by charging that he was trying to scare voters with talk of terrorism. Mr. Bush portrayed his opponent as indecisive and suffering from "election amnesia" with conflicting stands on Iraq.

CBS News Correspondent Mark Knoller, traveling with the Bush campaign, notes that in the coming days, "The president is looking beyond states he won last time. He'll be campaigning in New Mexico, Iowa, Wisconsin, Pennsylvania and Michigan - all states he lost - but might need should Florida or Ohio not go his way."

From Colorado and New Mexico, where Kerry campaigned Saturday, Kerry heads to Florida and New Hampshire Sunday, then Pennsylvania, Michigan and Wisconsin on Monday.

CBS News Correspondent Byron Pitts, traveling with the Kerry campaign, says Kerry staffers know in a race this tight, every vote counts - hence the investment of time in so many states.

But if given a choice, Pitts says, Kerry would stick to Ohio, Pennsylvania and Florida "because whoever wins two of those three states will likely win the White House."

Racing toward a finish line 10 days away in an election too close to call, Mr. Bush hopscotched by Marine helicopter Saturday to rallies in Republican-friendly areas of Florida, the state that put him in the White House four years ago.

His chopper landings on baseball fields, before thousands of cheering supporters, underscored Mr. Bush's ability to use the powers of the presidency for his campaign.

And if the helicopter arrivals weren't showy enough, Mr. Bush had Air Force One fly over the NFL football stadium in Jacksonville where tens of thousands of people were waiting to hear him speak.

Iraq and the war on terrorism dominated the campaign debate, reflecting voters' anxieties as the election nears. Kerry advisers acknowledged that the issues play to Mr. Bush's political strength as commander in chief, but said confronting the president may be the best way to weaken his standing.

A majority of likely voters approve of Mr. Bush's handling of the war on terror and foreign policy. They are evenly split on who would do the best job in Iraq.

Mr. Bush mocked Kerry for criticizing him on Iraq, saying Kerry now calls it the "wrong war" after voting to authorize force and calling it the right decision when U.S. troops invaded.

"Sen. Kerry seems to have forgotten all that as his position has evolved during the course of the campaign," Mr. Bush said. "You might call it election amnesia."

Kerry opened the day in Pueblo, Colo., asking voters to choose what he described as his optimistic outlook. "Vote your hopes, not the fears that George Bush wants you to feel," Kerry said. "Vote your hopes for our nation. Vote the possibilities of our country."

Kerry's southwestern swing briefly touched Mr. Bush's adopted home state of Texas, but only as an airport landing before a rally in Las Cruces, N.M.

"This president keeps going around the country trying to scare people," Kerry said. "The only thing he wants to talk about is terror, the war on terror, national security. If that's the debate we want to have, I'm prepared to have that debate because I can wage a better war on terror than George Bush has."

Mr. Bush's campaign said Kerry is using scare tactics himself, striking fear into seniors with claims about Social Security and fueling rumors about a military draft.

"John Kerry has run a relentlessly negative and pessimistic campaign," Bush spokesman Steve Schmidt said. "He has no positive agenda for the future of our country."

Kerry spokesman Phil Singer returned Mr. Bush's criticism of the senator. "As much as we'd all like to forget the last four years of George Bush's failed policies and wrong choices, voters aren't going to have amnesia when it comes time to vote on Election Day," Singer said.

Kerry criticized Mr. Bush for not chasing down Osama bin Laden but stopped short of asserting, as he had a day before, that he would have captured or killed the reputed mastermind of the Sept. 11 attacks.

Mr. Bush said the choice voters face "could not be clearer. You cannot lead our nation to the decisive victory on which the security of every American family depends if you do not see the true dangers of the post-Sept. 11 world."

Four years ago, Mr. Bush won Florida by 537 votes. On Saturday he tried to energize Republicans in counties he carried in 2000, stopping in Fort Myers and Lakeland, on the west side of the state, at Melbourne on the east coast, and finally in Jacksonville, situated in the heavily Republican northeast.

The Kerry campaign says Mr. Bush's weekend trip here to fire-up supporters shows that he's no longer trying to woo independents and conservative Democrats in the state. Outside the stadium, Kerry supporters shouted "No more years!" and waved signs that said "Fire the liar."

"Bush has given up on outreach to swing voters in Florida," said Kerry spokesman Singer, noting that all four stops are in Republican areas. Singer said voters are "swinging away from Bush."

Bush campaign spokesman Scott Stanzel said Mr. Bush has made recent campaign appearances in Democratic-leaning areas of Florida and that the campaign schedule still would allow another visit to the state before Election Day.

For hundreds of thousands of voters, however, the time of decision is over already. Thirty-two states allow some form of early voting, either in person or by absentee ballot, and many voters are taking advantage of the opportunity.

Amid worries of a close election left undecided on Nov. 2, as happened four years ago, courts already are grappling with the counting of provisional ballots - the ballots that are supposed to be a backup for eligible voters whose names are missing when they show up at the polls. For the first time, provisional balloting is required in all states this year.

A federal appeals court is expected to rule within days on counting provisional ballots, and the next step would be the Supreme Court, which settled the last presidential election.

In other campaign-related developments: