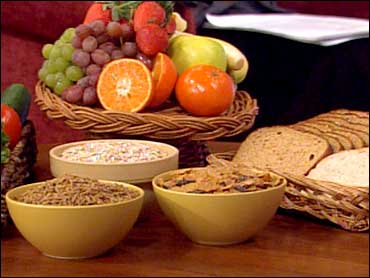 While one obesity expert called the results disappointing, the lead author of the research said it refutes claims by promoters of the low-carb Atkins and Zone diets that low-fat diets are partly behind America's obesity epidemic.

"It will help people to understand that the weight gain we're seeing in this country is not caused by the lower-fat diets," said study author Barbara V. Howard of MedStar Research Institute, a nonprofit research group.

The findings "counter" those who tout eating a low-carb, high-fat diet to lose weight,"

The key, Senay says, is eating the right carbs as you try to trim your waistline, not staying away from carbs.

However, the skimpy weight loss after seven years won't satisfy people looking for a cure for obesity, said Dr. Michael Dansinger, an obesity researcher at Tufts-New England Medical Center who was not involved in the study.

"This is like losing the Super Bowl but claiming a second place victory," Dansinger said. "The results are disappointing in the context of a country trying to battle obesity."

The study, appearing in Wednesday's Journal of the American Medical Association, included more than 48,000 women, ages 50 to 79. They were followed for an average of seven years and six months.

One group of women lowered the fat in their diets while increasing fruits, vegetables and whole grains. The other group didn't change their diets significantly.

The target fat content of the diet was 20 percent, but the women on the diet actually got about 30 percent of their calories in fat; their previous fat intake was about 39 percent.

The low-fat group lost, on average, 4.8 pounds in the first year, then regained most of that weight. The non-diet group stayed at about the same weight over the seven years.

The study, Senay says, shows that eating the right kind of carbohydrates doesn't have to make you gain weight, it won't interfere with you losing weight, and it's important to know the difference between "good carbohydrates" and "bad" ones as you try to lose weight.

Senay says the "good carbs" people seeking to lose weight can eat are comprised of foods such as vegetables, fruits, and whole grain breads and cereals. The study participants replaced the fat they took out of their diets with those healthy foods.

So, she says, good carbohydrates are fine.

"Unfortunately," she adds, "we love the taste of bad carbs that come in cookies, donuts and potato chips, but we should do our best to stay clear of them."

The women were part of the Women's Health Initiative, a research project of the National Institutes of Health that involves thousands of postmenopausal women across the country. Other WHI studies have uncovered the risks of taking hormones.

Weight loss was not the original focus of the study, Howard said. Other findings on the low-fat diet's effect on heart disease and cancer will be released this year, she said.

But researchers realized their data could answer charges made by popular diet promoters who drew a link between obesity and recommendations of low-fat eating plans by health organizations and the government. Low-fat diets promote foods such as grains and pasta, which are mostly forbidden by low-carb diets.

"The Zone" diet author Dr. Barry Sears, after reading the new study, said he stands by his belief that the recommended low-fat, high-carb diet caused Americans to gain weight.

He noted that women on the low-fat diet in the study lost only a fraction of a pound per year, on average, and they added 1.6 centimeters — about a half-inch — to their waist circumferences. The other group added 1.9 centimeters.

"I was struck by what the study didn't say," Sears said.

Dansinger, who co-authored an editorial that accompanies the study, said his research has shown that diets like Atkins and The Zone work, but are hard to stay on.

"People who succeed at maintaining a dramatic weight loss have changed their mindset and priorities and have made exercise and healthy eating among the top priorities in their lives," he said.

Other studies, notes The Early Show's Senay, have found that those who go on a low-carb diet such as Atkins, which encourages eating a minimal amount of these foods and eating mostly fats, may result in more weight gain in the first six months, but after a year, no difference in weight loss was demonstrated between the low-carbohydrate and low-fat diet groups.

The bottom line, she stresses, is that in order to really lose weight, you have to reduce calories (why reducing fat intake is important), exercise more or be more active.