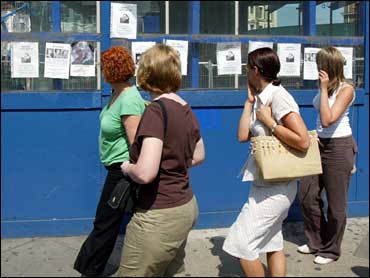 Britain's close alliance with the United States has put it at particular risk of terrorist attack, two leading think tanks said Monday, but the British government says the nation would not have been safer by staying out of Iraq.

The continuing debate about the wisdom of Britain's military commitments has intensified after the bombings of three London underground trains and a bus on July 7.

Police on Monday raised the death toll in the attacks to 56, including the four suicide bombers.

The Royal Institute of International Affairs and the Economic and Social Research Council said the situation in Iraq had given "a boost to the al Qaeda network's propaganda, recruitment and fund-raising" and provided an ideal training ground for terrorists.

"The time for excuses for terrorism is over," British Foreign Secretary Jack Straw said at an EU meeting in Brussels, Belgium. "The terrorists have struck across the world, in countries allied with the United States, backing the war in Iraq and in countries which had nothing whatever to do with the war in Iraq."

However, Britain's defense secretary said over the weekend he hopes to draw down the number of British troops in Iraq by almost two-thirds by the middle of next year.

Meanwhile, Palmer reports the branch of the investigation in Pakistan is very active at the moment. Cell phone records as well as travel records suggest that at least two of the young bombers had established links there with established terrorist networks.

Police are still searching homes and businesses in Leeds, including an Islamic bookshop. They want to find out who gave orders to the four young bombers caught here on a surveillance camera just setting out on their deadly mission.

On Sunday, Britain's largest Sunni Muslim group issued a binding religious edict, or fatwa, condemning the suicide bombings as the work of a "perverted ideology."

"Who has given anyone the right to kill others? It is a sin. Anyone who commits suicide will be sent to hell," said Mufti Muhammad Gul Rehman Qadri, the council chairman. "What happened in London can be seen as a sacrilege. It is a sin to take your life or the life of others."

The council said Muslims should not use "atrocities being committed in Palestine and Iraq" to justify attacks.

"We equally condemn those who may have been behind the masterminding of these acts, those who incited these youths in order to further their own perverted ideology," Qadri said.

The Sunday Times reported that one suspected bomber, 30-year-old Mohammad Sidique Khan, was investigated last year by MI5, Britain's domestic intelligence service, but was not regarded as a threat to national security or subsequently put under surveillance.

MI5 began evaluating Khan, a Briton of Pakistani ancestry, during an inquiry that focused on an alleged plot to explode a large truck bomb outside a target in London, the newspaper said.

The Metropolitan Police and a spokesman for Prime Minister Tony Blair declined comment.

The head teacher of Hillside Primary School, which employed Khan as a teaching assistant from March 2001 to December 2004, described him as "hardworking, passionate and dedicated in his work with children."

"All of us at Hillside are utterly shocked to hear that one of our staff had been responsible for such an horrific act," head teacher Sarah Balfour said.

The bombings have prompted the government to propose new legislation outlawing "indirect incitement" of terrorism — including public praise for those who carry out attacks.

"In terms of asylum, our policy is: If you are in fear of persecution, you are entitled to come here," the minister said on BBC television. "Obviously, if you then seek to attack the very state that you come to, that gives rise to different questions."

The fatwa was issued as investigators in Leeds continued to focus on an Islamic bookshop and a house near the home of one of the four alleged bombers, 22-year-old Shahzad Tanweer.

Tanweer, born in Britain to Pakistani parents, was believed to be one of the Underground train bombers and reportedly visited two religious schools on a trip to Pakistan.

Pakistani intelligence agents have questioned students, teachers and administrators at the school in central Lahore, and at least two other al Qaeda-linked radical Islamic centers, showing pictures and a dossier on Tanweer.

Three of the four men identified by police as the suspected suicide bombers were born in Britain to parents of Pakistani origin. They are Tanweer, Khan and 18-year-old Hasib Hussain, who were all from the Leeds area. The fourth suspect is Jamaican-born Germaine Lindsay, 19, who came to Britain as an infant and lived in Luton, a city north of London.

Police on Saturday released an image captured by surveillance cameras showing all four bombers with backpacks entering the Luton train station on the morning of the attacks. Investigators say the four took a train from Luton to London's King's Cross station, where they split up to carry out the bombings.

Officers have also been searching the Leeds home of an Egyptian biochemist after investigators reportedly found traces of explosives in the man's bathtub. Magdy Mahmoud Mustafa el-Nashar is being interrogated by Egyptian authorities, who say the biochemist denies having any connection to the attacks.

Egypt is not prepared to hand el-Nashar over to Britain, Egyptian security officials said. British investigators are in Cairo to observe the questioning. The two countries have no extradition treaty.