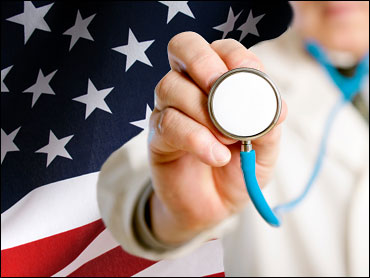 If the global economy were a 100-yard dash, the U.S. would start 23 yards behind its closest competitors because of health care that costs too much and delivers too little, a business group says in a report to be released Thursday.

The report from the Business Roundtable, which represents CEOs of major companies, says America's health care system has become a liability in a global economy.

Concern about high U.S. costs has existed for years, and business executives - whose companies provide health coverage for workers - have long called for getting costs under control. Now President Obama says the costs have become unsustainable and the system must be overhauled.

Americans spend $2.4 trillion a year on health care. The Business Roundtable report says Americans in 2006 spent $1,928 per capita on health care, at least two-and-a-half times more per person than any other advanced country.

In a different twist, the report took those costs and factored benefits into the equation.

It compares statistics on life expectancy, death rates and even cholesterol readings and blood pressures. The health measures are factored together with costs into a 100-point "value" scale. That hasn't been done before, the authors said.

The results are not encouraging.

The United States is 23 points behind five leading economic competitors: Canada, Japan, Germany, Britain and France. The five nations cover all their citizens, and though their systems differ, in each country the government plays a much larger role than in the U.S.

The cost-benefit disparity is even wider - 46 points - when the U.S. is compared with emerging competitors: China, Brazil and India.

"What's important is that we measure and compare actual value - not just how much we spend on health care, but the performance we get back in return," said H. Edward Hanway, CEO of the insurance company Cigna. "That's what this study does, and the results are quite eye-opening."

Higher U.S. spending funnels away resources that could be invested elsewhere in the economy, but fails to deliver a healthier work force, the report said.

"Spending more would not be a problem if our health scores were proportionately higher," Dr. Arnold Milstein, one of the authors of the study, said in an interview. "But what this study shows is that the U.S. is not getting higher levels of health and quality of care."

Other countries spend less on health care and their workers are relatively healthier, the report said.

Medical costs have long been a problem for U.S. auto companies. General Motors spends more per car on health care than it does on steel. But as more American companies face global competition, the "value gap" is being felt by more CEOs - and their hard pressed workers.

One thing the report does not do is endorse the same solution that countries like Canada have adopted: a government-run health care system.

The CEOs of the Business Roundtable believe health care for U.S. workers and their families should stay in private hands, with a government-funded safety net for low-income people.