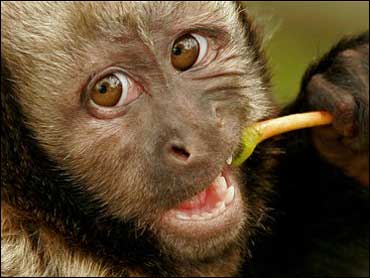 For capuchin monkeys, it seems, it's better to both give and receive than just to receive.

At least, that is what researchers at the Yerkes National Primate Research Center at Emory University in Atlanta, Georgia, have found.

When paired with relative or "friend" the monkeys primarily went for the double reward, known as the "prosocial" choice, researchers led by Frans de Waal report in Tuesday's edition of Proceedings of the National Academy of Sciences.

"The fact the capuchins predominantly selected the prosocial option must mean seeing another monkey receive food is satisfying or rewarding for them," said de Waal.

But the monkeys were not so generous with strangers, choosing the so-called "selfish" option instead.

"We believe prosocial behavior is empathy based. Empathy increases in both humans and animals with social closeness, and in our study, closer partners made more prosocial choices. They seem to care for the welfare of those they know," de Waal said in a statement.

Now the question is whether giving is self-rewarding to capuchins because they can eat together, or if the monkeys simply like to see the other monkey enjoying the food.

In the study, eight adult female capuchins were given tokens to exchange for food. One token got them a slice of apple. The other also got an apple slice, plus a similar slice was given to another monkey they could see.

In a series of tests, when the "partner" monkey was a relative or a familiar female from the same social group, the one choosing the token moved closer to the partner and primarily chose the prosocial token that got them both food. But when the second monkey was a stranger, the selfish token was more likely to be chosen, often with the lead monkey turning her back to the stranger.

Since the reward was the same for the monkey making the choice, de Waal suggested there must be some intangible benefit to the prosocial choice, perhaps an indication of empathy.