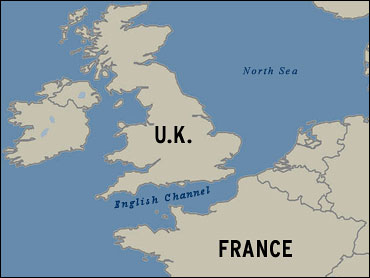 One of Earth's largest-ever floods broke apart a strip of land connecting what is now Britain and France, permanently separating them, researchers say.

The flood unleashed about 35 million cubic feet of water per second, 100 times greater than the water discharge of the Mississippi River.

The natural disaster, which occurred about 400,000 years ago during a glacial period, was later followed by rising sea levels that created what is now the English Channel, the study says.

It is not known if humans died during the disaster, but the study says the flooding may have ended migration by early humans and mammals such as horses across the land, which was at least 28 miles wide.

The theory that Britain became an island during a catastrophic flood — rather than through the course of normal erosion — was first proposed in the 1980s. The new study, outlined in the journal Nature, used high-resolution sonar data that were previously unavailable to produce three-dimensional, high-quality imagery of the region.

In a commentary in the journal, Philip Gibbard, a University of Cambridge geologist who was not involved in the study, praised the research. "It is no exaggeration to say that this Channel flood was probably ... one of the largest ever identified ... (and) it had profound long-term geographical consequences," he wrote.

Another outside expert, Chris Stringer, a paleontologist at the Natural History Museum, also welcomed the report.

"The timing and method of formation of the Channel have been a long-running argument — after all it really makes Britain what is today, geographically — and the evidence presented in this paper is spectacular," Stringer said.

He said it explains and reinforces the picture his museum's "Ancient Human Occupation of Britain" project is putting together about the increasing isolation of Britain from Europe after 400,000 years ago.

The study — by three scientists at Imperial College London and an official at the UK Hydrographic Office — says the megaflood occurred during the first major extension of a continental ice sheet into lowland central Europe and Britain.

The ice advanced across the emergent North Sea floor from southern Scandinavia, blocking rivers flowing northward into the Atlantic and causing a gigantic glacial lake to develop in front of it, dammed by higher ground to the south and fed by the drainage of much of Western Europe.

When this dam overflowed, it produced a huge deluge that quickly broke apart the land mass connecting what is now England and France.

The glacier eventually withdrew from the area, but about 160,000 years ago, during a second significant glaciation, another ice sheet reached central Netherlands and again dammed a lake in the southern Northern Sea, the study says.

When this barrier broke it produced a vast volume of water that surged through the land gap, dramatically deepening it to about its current level and sealing Britain's fate as an island.

The study also says the two almost instantaneous releases of huge volumes of fresh water into the Atlantic may have triggered changes in ocean circulation that in turn may have affected the climate of the entire North Atlantic region.