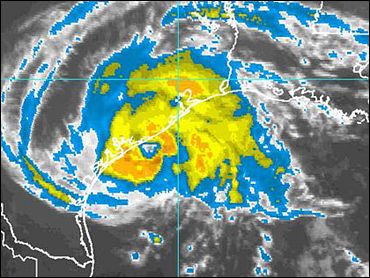 Changes in the lower parts of the stratosphere may influence the weather below, and studying that region could improve extended-range forecasting, according to a new atmospheric analysis.

Because these high-level changes occur over a week or two, watching them might allow forecasters to improve their predictions for the weather 10 days or more ahead.

A lot remains to be learned, said Baldwin. His findings are published in Friday's issue of the journal Science.

The troposphere is the area of the atmosphere where people live and where most weather occurs. Temperatures gradually cool as one gets higher in the troposphere. Immediately above is the stratosphere, where the air is much thinner, powerful winds can blow and the temperature warms with height.

The transition between the two, called the tropopause, varies in altitude, averaging as low as 25,000 feet in the arctic and rising to 50,000 feet or more over the equator.

Baldwin likens the Arctic Oscillation to the better known El Nino in the Pacific Ocean, where changes in air pressure and wind patterns can affect the weather nearly worldwide.

His study found that variations in the Arctic Oscillation are associated with wintertime fluctuations from Alaska and Scandinavia to Spain and the Middle East, including changes in rain and snowfall, storm tracks and the frequency of cold air outbreaks.

But while El Nino lasts months, the Arctic Oscillation has a time scale of weeks and can change rapidly.

Watching it could give forecasters two ways to improve their outlooks. They know what happens when it's strong or weak, so when changes occur they could make a simple statistical forecast. In the future, the effects of changes in the oscillation could be incorporated into the complex computer models used to predict the weather.

Baldwin cautioned there is a big difference between forecasting for two days and a month. Looking a month ahead, the best to be expected would be to say it will be warmer or cooler than normal, he said. "It's not going to forecast a rain shower four weeks from now."

The findings were welcomed by David Nicosia, a National Weather Service forecaster who has studied the effects of the Arctic Oscillation on weather in the Northeast.

"This paper is outstanding and based on very good science," said Nicosia, who was not part of the research group.

The Arctic Oscillation affects the powerful winds that circle the Arctic. When those winds are strong, cold air remains trapped in the north, and the jet stream moves west-to-east across the United States, bringing relatively mild Pacific air.

But when the vortex weakens, cold air tends to move south into the United States and the jet stream winds are pushed south, allowing powerful storms called nor'easters to form and bring snow to the Northeast.