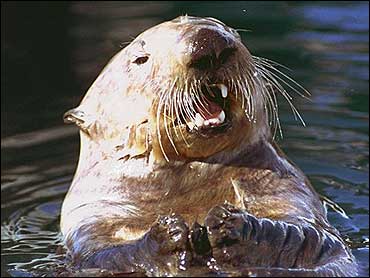 Oil spilled by the Exxon Valdez 17 years ago extends farther into Alaska's tidal waters than previously thought and could be causing longterm harm to wildlife, a study concludes.

Research chemist Jeffrey Short and colleagues at the National Marine Fisheries Service in Juneau concluded that oil was found between the high- and low-tide lines where predators such as sea otters and sea ducks may encounter it while disturbing sediment in search of prey.

"This study shows that it is very plausible that exposure to Exxon Valdez oil is having a material impact on many shore-dwelling animals and is contributing to their slow recovery in some parts of Prince William Sound," Short said in a statement.

The study is to be published in the June 15 edition of Environmental Science & Technology, the journal of the American Chemical Society.

Exxon Mobil Corp. spokesman Mark Boudreaux said that more than 350 studies done by independent academics have not found significant, lingering impact on species as a result of the spill.

"We believe that the sound has recovered, is healthy and is thriving," he said.

Short and his colleagues focused their research on Knight Island about 40 miles southwest of the spill site and squarely in the path of the heavy ooze that flowed from the damaged oil tanker.

They found Exxon Valdez oil buried in sand and silt that only becomes dry during the lowest tides and is prime feeding ground for sea otters, ducks and other wildlife.

The Exxon Valdez ran aground March 24, 1989, spilling 11 million gallons and soiling more than 1,200 miles of rocky beach. The spill was the largest in U.S. history.

In a 1991 civil settlement, the company agreed to pay $900 million over a 10-year period ending in 2001. However, a "reopener" provision created a window in which the state and federal governments could claim up to an additional $100 million.

Dozens of people have spoken at emotional hearings this year, urging officials to file a claim for additional damages before the June 1 deadline to apply.

"We find the timing interesting, that the study has been released for peer review two weeks before the deadline for the decision to notify Exxon Mobil of an intention to request a reopener of the settlement," Boudreaux said.