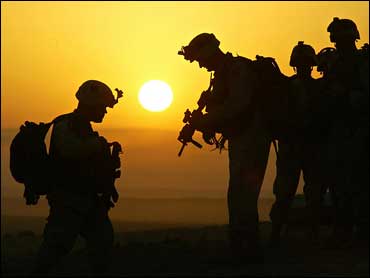 A new report issued by some of the nation's top retired military leaders, including the former Army chief of staff and President George W. Bush's former chief Middle East peace negotiator, warns that global warming poses a "serious threat to America's national security" with terrorism worsening, and that the U.S. will likely be dragged into fights over water and other shortages.

Joining calls already made by scientists and environmental activists, the Military Advisory Board called on the U.S. government to make major cuts in emissions of gases that cause global warming.

The report, "National Security and the Threat of Climate Change," warns that in the next 30 to 40 years there will be wars over water, increased hunger, instability from worsening disease and rising sea levels, and global warming-induced refugees. "The chaos that results can be an incubator of civil strife, genocide and the growth of terrorism," the report predicted.

"Climate change exacerbates already unstable situations," former U.S. Army chief of staff Gordon Sullivan told Associated Press Radio. "Everybody needs to start paying attention to what's going on. I don't think this is a particularly hard sell in the Pentagon. ... We're paying attention to what those security implications are."

The report was issued by the Alexandria, Va.-based, national security think-tank The CNA Corporation, and was written by six retired admirals and five retired generals. They warn that "projected climate change will seriously exacerbate already marginal living standards in many Asian, African and Middle Eastern nations," leading to greater political instability in those regions.

"Weakened and failing governments, with an already-thin margin for survival, foster the conditions for internal conflicts, extremism and movement toward increased authoritarianism and radical ideologies," the report said. "The U.S. will be drawn more frequently into these situations."

In a veiled reference to President Bush's refusal to join an international treaty to cut greenhouse gas emissions, the report said the U.S. government "must become a more constructive partner" with other nations to fight global warming and cope with its consequences.

The Bush administration has declined mandatory emission cuts in favor of voluntary methods. Other nations have committed to required reductions that kick in within a few years.

"We will pay for this one way or another," wrote Zinni, former commander of U.S. Central Command. "We will pay to reduce greenhouse gas emissions today, and we'll have to take an economic hit of some kind. Or we will pay the price later in military terms. And that will involve human lives. There will be a human toll."

Among the recommendations of the Military Advisory Board:

The report is "pretty impressive," but may be too alarmist because it may take longer than 30 years for some of these things to happen, said Stanford scientist Terry Root, a co-author of this month's international scientific report on the effects of global warming on life on Earth.

But the instability will happen sometime, Root agreed.

"We're going to have a war over water," Root said. "There's just not going to be enough water around for us to have for us to need to live with and to provide for the natural environment."

University of Victoria climate scientist Andrew Weaver said the military officers were smart to highlight the issue of refugees who flee unstable areas because of global warming.

"There will be tens of millions of people migrating, where are we going to put them?" Weaver said.

Weaver said that over the past years, scientists, who by nature are cautious, have been attacked by conservative activists when warning about climate change. This shows that it's not a liberal-conservative issue, Weaver said.

Vice Admiral Richard Truly, who also served as a shuttle astronaut and NASA administrator, claims he was agnostic as to the existence of climate change and the link to the burning of fossil fuels, until he began conducting research for this report. "I wasn't convinced by a person or any interest group," he wrote. "It was the data that got me."

"When you look at the Earth's horizon, you see an incredibly beautiful, but very, very thin line," Truly wrote. "You can see a tiny rainbow of color. That thin line is our atmosphere. And the real fragility of our atmosphere is that there's so little of it."

"Climate change is a national security issue," retired General. Gordon R. Sullivan, chairman of the Military Advisory Board and former Army chief of staff, said in releasing the report at a Washington news conference. "We found that climate instability will lead to instability in geopolitics and impact American military operations around the world."

The report can be downloaded from CNA's Web site at SecurityAndClimate.cna.org.