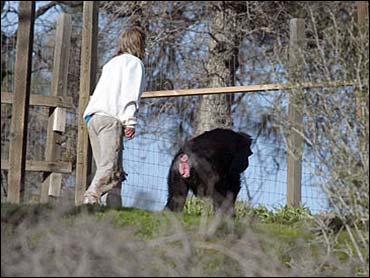 One of the most detailed comparisons yet of human and chimp DNA shows that the split between the two species was a long, messy affair that may even have featured an unusual evolutionary version of breakup sex.

Previous genetic research has shown that chimpanzees and humans are sister species, having split off from a common ancestor about 7 million years ago. The new study goes farther by looking at approximately 800 times more DNA than earlier efforts.

That additional data make it possible to determine not just when, but how the split happened.

"For the first time we're able to see the details written out in the DNA," said Eric Lander, one of the collaborators on the study. "What they tell us at the least is that the human-chimp speciation was very unusual."

Unusual, indeed. The researchers, from the Broad Institute of MIT and Harvard, propose that humans and chimpanzees first split up about 10 million years ago. Then, after evolving in different directions for about 4 million years, they got back together for a brief fling that produced a third, hybrid population with characteristics of both lines.

That genetic collaboration then gave rise to two separate branches, one leading to humans and the other to chimps.

The work has inspired both admiration and skepticism. Many paleontologists have a hard time believing that some of the fossil humans that are known to have lived during that era could have been pairing up with apes.

"It's a totally cool and extremely clever analysis," said Daniel Lieberman, a professor of biological anthropology at Harvard who wasn't involved in the study. "My problem is imagining what it would be like to have a bipedal hominid and a chimpanzee viewing each other as appropriate mates, not to put it too crudely."

Past studies that compared human and chimp DNA could only average the differences between a limited number of spots in their genetic codes to come up with a single date for the split, rather than a span of years. The genius of the new study is that it breaks the genetic code into pieces and then looks at each section individually.

Surprisingly, some genes differ so much between the two species that they must not have been mixing for the past 10 million years. But others are similar enough that they appear to have been in contact no more than 6.3 million years ago.

That finding, and some details about which particular genes split when, led the study's authors to propose their controversial scenario.

The new data also suggest the final human-chimp split was much more recent than the 7 million-year date that fossils and previous studies indicate, certainly no earlier than 6.3 million years ago, and more likely in the neighborhood of 5.4 million years.