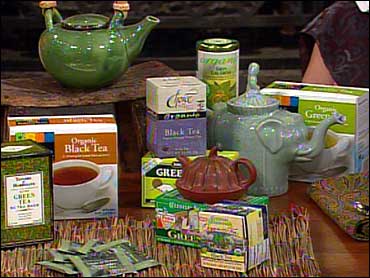 She said a German study found that green tea extracts could help people with skin damaged from radiation therapy.

Dr. Senay said the German researchers, who conducted the study on only 60 people, found that after 16 days, the people who applied the green tea extract, saw some skin improvement. The people who used black tea also saw improvement after about 22 days, but the green tea was more effective.

"The thinking is that green tea contains polyphenyls, black tea does as well but green tea may contain more," she said. "These are anti-oxidants that we know can reduce inflammation and fight off infection. Of course, it's so difficult to isolate just one component of foods as we've learned over time. It may be other things inside tea we just don't know about yet that could contribute to this benefit."

Researchers in Japan conducted a study of 40,000 people ages 40-79. They followed people over 11 years and found that people who consume five or more cups of green tea a day, were 16 percent less likely to die from anything during that time compared to people who drink one cup a day.

"You know, I think the big surprise for researchers who look at this is that it was really heart disease," Dr. Senay said. "It was heart disease, really, the thing that stood out here — 26 percent lower risk of heart disease, but there was a gender difference. The women did better drinking green tea: 31 percent reduction compared to the men, only 22 percent."

Dr. Senay said that many of the men who participated in the study were more likely to smoke than women, which cancels out the benefit of the green tea.

Unfortunately, she said the study didn't determine if green tea helps fight or prevent cancer. Still, Dr. Senay said there is no significant downside to drinking it.

"It does have a vitamins in it — vitamin K, which may make things like blood thinners less effective, but by and large there's really no drawback," she said.