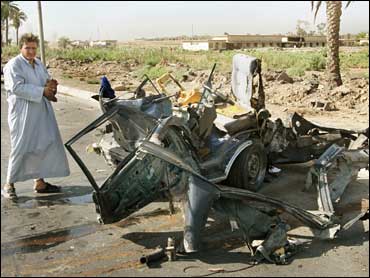 Unrelenting violence took over Iraq Thursday, which the prime minister says can be ended by bringing insurgents into the political process.

Iraqi police say a suicide car bomber struck a funeral in Kirkuk, killing 4 people and wounding 27. Meanwhile, a trash collector and the head of security for Baghdad University were also slain Thursday.

At least six other deaths were reported in the capital, including two merchants, a baker, an electrical worker and a woman sitting in her car with three of her sons, who were wounded. Police also found the body of a man who had been blindfolded, handcuffed and shot in the head in western Baghdad.

The violence came a day after insurgent and government officials said 11 militant groups have offered an immediate halt to all attacks, including those on American troops, if the United States agrees to withdraw foreign forces from Iraq in two years.

Withdrawal is the centerpiece of a set of demands from the groups, which operate north of Baghdad in the heavily Sunni Arab provinces of Salahuddin and Diyala. Although much of the fighting has been to the west, those provinces are increasingly violent and attacks there have crippled oil and commerce routes.

The trash collector, a Shiite, was gunned down in a drive-by shooting early Thursday in western Baghdad, police Capt. Jamil Hussein said.

Gunmen in a civilian car also intercepted a car carrying Kadhim Challoub, who was in charge of the guards at Baghdad University, ordered his driver and his guard out, then killed the security chief on the eastern side of the capital, according to police Lt. Mohammad Khayoun.

A roadside bomb aimed at a police patrol in northern Baghdad missed its target but killed one civilian and wounded another.

Highlighting the government's efforts to rein in the violence and take over control of its own security from U.S. forces, Interior Minister Jawad al-Bolani led a celebration at the police academy in Baghdad to swear in 560 newly graduated recruits.

Al-Maliki's reconciliation plan "is evidence of the government's intention to restore stability and promote reconstruction."

The insurgent groups who have made contact with the government have largely shunned attacks on Iraqi civilians, focusing instead on the U.S.-led coalition forces. Their offer coincides with Prime Minister Nouri al-Maliki's decision to reach out to the Sunni insurgency with a reconciliation plan that includes an amnesty for fighters.

The Islamic Army in Iraq, Muhammad Army and the Mujahedeen Shura Council, the umbrella group that covers eight militant groups including al Qaeda in Iraq, were not party to any offers to the government.

Naseer al-Ani, a Sunni Arab politician and official with the largest Sunni political group, the Iraqi Islamic Party, said that al-Maliki should encourage the process by guaranteeing security for those making the offer and not immediately reject their demands.

"The government should prove its goodwill and not establish red lines," al-Ani said. "If the initiative is implemented in a good way, 70 percent of the insurgent groups will respond positively."

Al-Maliki, in televised remarks Wednesday, did not issue an outright rejection of the timetable demand. But he said it was unrealistic, because he could not be certain when the Iraqi army and police would be strong enough to make a foreign presence unnecessary for Iraq's security.

In Washington, Defense Secretary Donald Rumsfeld said that President Bush's "view has been and remains that a timetable is not something that is useful. It is a signal to the enemies that all you have to do is just wait and it's yours.

"The goal is not to trade something off for something else to make somebody happy, the goal is to succeed," he said.

Bush has said U.S. troops will remain in Iraq for years to guarantee the success of the new Iraqi government. However, American military officials have said substantial reductions of the current force of 127,000 U.S. troops could be made before the end of 2007.

Eight of the 11 insurgent groups banded together to approach al-Maliki's government under The 1920 Revolution Brigade, which has claimed credit for killing U.S. troops in the past. All 11, working through intermediaries, have issued identical demands, according to insurgent spokesmen and government officials.

The total number of insurgents is not known, nor is how many men belong to each group. But Iraq is believed to have about two dozen insurgent organizations in Iraq, so the 11 contacting the government could represent a substantial part of the Sunni-led insurgency.

Al-Maliki's offer of amnesty for insurgents would not absolve those who have killed Iraqis or American coalition troops. But proving which individuals have carried out fatal attacks would, in many, if not most, cases, be a difficult task.

Al-Maliki also set up an e-mail account to communicate with insurgents, flashing the address on the screen during a broadcast Sunday night.