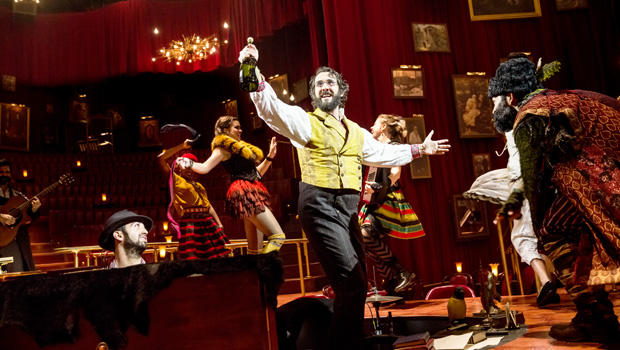 In the run-up to the presentation of Broadway's highest honors, the Tony Awards, listen to the original Broadway cast albums of this year's nominees for Best Musical. Links to music from the four contenders -- "Come From Away," "Dear Evan Hansen," "Groundhog Day: The Musical," and "Natasha, Pierre & The Great Comet of 1812" -- can be found below.

And click here to stream this year's nominees for Best Musical Revival!

The 71st Tony Awards will be presented live on Sunday, June 11, at Radio City Music Hall. The ceremony, hosted by Kevin Spacey, will be broadcast at 8 p.m. ET/PT on CBS and on CBS All Access.

Even as we move further away in time from 9/11, the stories that came out of the responses to that tragedy continue to astonish, and justify a faith in humanity in spite of the horrors witnessed that day.

On September 11, 2001, in the immediate wake of the attacks, the FAA halted all air travel within and into the U.S. The ground stop forced dozens of international flights to set down on the island of Newfoundland, at an airport near the town of Gander. How the Newfoundlanders generously responded to the immediate needs of thousands of stranded passengers and flight crew members -- many desperate for word from loved ones in the States -- is the basis of the musical "Come From Away."

With book, music and lyrics by Irene Sankoff and David Hein, the show features Gaelic and pop flavors performed by an onstage band, with an ensemble cast of 12 actors playing all the characters, from the "plane people" to the hospitable Newfoundlanders who take them in during the crisis.

The song "Darkness and Trees" describes the terror the passengers feel after their unscheduled landing, without news of home or any inkling about their fate.

Listen to "Darkness and Trees"

In "Me and the Sky," Tony nominee Jenn Colella gives a powerful performance as Beverly, a pilot who recounts her lifelong love of flying and the sexism she overcame to become the first female captain for American Airlines.

Listen to "Me and the Sky"

You can stream the original Broadway cast album of "Come From Away" by clicking on the embed below (Free Spotify registration required to hear the tracks in full):

To watch a featurette about the recording of the "Come From Away" cast album click on the video player below.

"Come From Away" original Broadway cast album (Molly Records) is available on CD (via Amazon and Barnes & Noble) and via Digital Download (Amazon and iTunes).

"Come From Away" is currently playing at the Gerald Schoenfeld Theatre, New York City | Ticket information

When one of his letters is found and believed actually to have been written by another student who committed suicide, Evan begins living a lie -- that he'd been friends with the dead boy, Connor, and writes more letters using Connor's "voice" to speak of emotions he otherwise could not, such as his own infatuation with Connor's sister, Zoe (Laura Dreyfuss).

Though the plot concerns rather dark material -- teen suicide, broken families -- the story explores how the memory of loved ones can be a potent force for empathy, and for social and familial connections.

The romantic tunes and delicate orchestrations lift the score, aided by the warm voices of Platt and Dreyfuss, as in their duet, "If I Could Tell Her."

Listen to "If I Could Tell Her"

In "Only Us," Dreyfuss and Platt finally separate out their emotions, beyond the personal feelings for her dead brother, and from the larger impact Evan's now-viral letters have had thanks to social media.

Listen to "Only Us"

You can stream the original Broadway cast album of "Dear Evan Hansen" by clicking on the embed below (Free Spotify registration required to hear the tracks in full):

To watch a video promo for the original Broadway cast album click on the video below:

Tomorrow spring will come and then
There will be blue skies my friend
Bright eyes and laughter.

Tomorrow there will be sun
But if not tomorrow, perhaps the day after.

Tim Minchin concocted a wonderfully spunky score and lyrics for the musical based on the 1993 Bill Murray comedy about a TV weatherman who finds himself caught in a time loop, always reliving February 2nd.

Minchin, a 2013 Tony nominee for "Matilda: The Musical," mixes flavors of standard Broadway ballads, jazz, small-town marching bands, grunge rock and morning radio jingles, for a tale of a narcissist driven to attempt suicide over and over and over again, before finally seeing the light, gaining redemption and love.

The tongue-in-cheek warmth of the lilting opening number, "There Will Be Sun," captures the quaint small-town ethos of Punxatawny, Pa., whose townspeople wistfully sing, "Oh if I could, I'd will these clouds away, my love." But doing so would, of course, mean Punxatawny Phil sees his shadow, foretelling six more weeks of winter. You can't win!

It's the sort of lesson -- learning to accept things outside of your own control -- that drives the story … and drives swaggering, cynical meteorologist Phil Connors (Tony nominee Andy Karl) into an existential crisis.

Listen to "There Will Be Sun"

"If I Had My Time Again" is a showstopping ballad-cum-rock anthem about regret and correcting past mistakes in which Rita (Tony-nominee Barrett Doss) is, at first, unapologetic about her life choices, but gradually comes to regret not regretting.

Listen to "If I Had My Time Again"

You can stream the original Broadway cast album of "Groundhog Day: The Musical" by clicking on the embed below (Free Spotify registration required to hear the tracks in full):

To watch a featurette about the recording of the "Groundhog Day" original cast album click on the video below:

Chandeliers and caviar, the war can't touch us here!

When it was first produced off-Broadway in 2012, "Natasha, Pierre & The Great Comet of 1812," inspired by a section of Leo Tolstoy's "War and Peace," was staged in a room dressed as a Russian club, where patrons were served pierogies and vodka as cast members sauntered and swayed through the crowd.

But this was no mere dinner theatre: With music and libretto by Dave Malloy (and virtually no spoken dialogue), the electro-pop opera was a dazzling show, both introspective ("In 19th-century Russia, we write letters, we write letters") and effusive (a passionate romance set against the heady backdrop of war with Napoleon). The original production earned a special Obie Award and five Drama Desk Award nominations.

Even in a large uptown house, it's still a monumentally immersive show. In its Broadway incarnation (starring Josh Groban and Denée Benton), the stage extends out throughout the theatre, surrounding the audience with musicians and more characters than you can shake a stick at (which the show's catchy "Prologue" takes delight in reminding us):

In the intoxicating song "Charming," the flirtatious Hélène (the saucy Amber Gray) coaxes Natasha to the ball, where (Russian novel spoiler alert!) she will be seduced by a rake.

Now if you have a dress you must wear it out
How can you live in Moscow and not go nowhere?
So you love somebody? Charming. But that's no reason to shut yourself in
Even if you're engaged, you must wear your dress out somewhere.

You can stream the original Broadway cast album of "Natasha, Pierre & The Great Comet of 1812" by clicking on the embed below (Free Spotify registration required to hear the tracks in full):

To watch a music video of Josh Groban performing "Dust and Ashes" click on the player below:

Hardcover and CD: "The Great Comet: The Journey of a New Musical to Broadway" by Steven Suskin (Sterling)