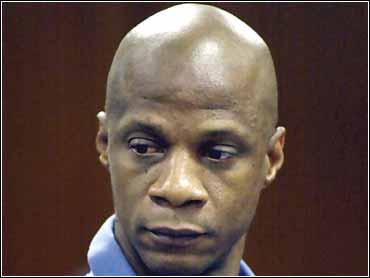 This is the latest legal tangle for the ex-athlete who has battled drugs and cancer.

Marion County sheriff's deputies arrested Strawberry after officials at the Phoenix House rehabilitation center in Ocala, Fla., told them the former New York Yankees' and Mets' slugger had violated the terms of his court-ordered treatment program.

"Mr. Strawberry is a resident of the Marion County Jail," sheriff's spokesman Lenny Uptagraft said. "He had been a resident of Phoenix House, completing a drug program. We received reports that he was not in compliance with the terms of his treatment."

Uptagraft said Strawberry, who turned 40 Tuesday, was being held without bond for violation of community control. He said officials at the drug treatment center had not detailed Strawberry's noncompliance with his program.

As deputies were escorting him to the jail on Tuesday, Strawberry said he was confused by his arrest, the Ocala Star-Banner reported.

"They just said I was discharged from the program," Strawberry said outside the jail.

Strawberry said he had not been accused of fighting or other infractions at the center.

Strawberry was sent to Phoenix House in May 2001 by a judge in Tampa for violating his probation.

Ruling against a request by prosecutors to send Strawberry to jail, Hillsborough County Judge Florence Foster said at the time: "You're at bat in the bottom of the ninth inning with two strikes against you. You have proven you're a winner on the field. Now you must prove you're a winner off the field."

Strawberry struggled with drug abuse, colon cancer and depression during and after a 17-year big league career with the Yankees, Mets, Los Angeles Dodgers and San Francisco Giants.

Strawberry started his career with the Mets and during his eight seasons with the team won the 1983 National League Rookie of the Year award, played on the 1986 World Series championship team and led the National League with 39 homers in 1988. In his career, he hit 335 home runs and had 1,000 RBI.

He was playing for the Yankees when he failed a drug test in February 2000 and was suspended for the season by Major League Baseball.

He was arrested in April 1999 in Tampa on charges of soliciting a prostitute and cocaine possession. He pleaded no contest to the charges and was put on probation.

In September 2000 he was put under house arrest after he admitted driving under the influence of medication.

Strawberry, a father of five, said at a court hearing in November 2000 that he had given up hope and wanted to die when he was arrested for violating his probation.

At his sentencing hearing last year, Strawberry described himself as "very sick" and in need of help. But prosecutors asked that Strawberry be confined to prison, saying it was a necessary step to save his life.