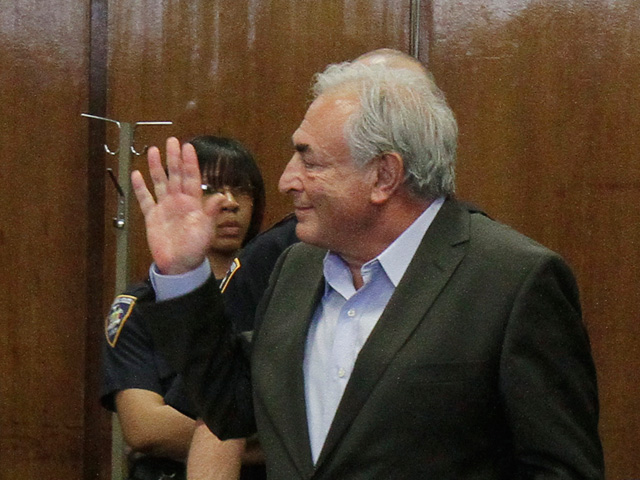 NEW YORK - A judge says he will clear the way for former International Monetary Fund leader Dominique Strauss-Kahn to get out of jail in his New York City sex case.

It's not clear, however, when Strauss-Kahn will be released.

State Supreme Court Justice Michael Obus said he would sign a release order Friday for the French economist and politician.

Obus had agreed Thursday to release Strauss-Kahn to house arrest with round-the-clock armed guard if he posted $1 million cash bail plus a $5 million bond.

The plan hit a snag after objections from within the apartment building where Strauss-Kahn was initially to stay. Prosecutors say he would be housed temporarily at another location.

CBS News station WCBS-TV in New York reports that the Upper East Side apartment rented for Strauss-Kahn to live while under house arrest rejected his wife's application after the building's management found out he would be staying there.

Strauss-Kahn is expected to go to temporary housing set up by the security firm Stroz Friedberg, CBS News reports. The housing is in downtown Manhattan, prosecutors said in court Friday.

Strauss-Kahn will not be permitted to leave the temporary location at all while the permanent arrangement is set up, CBS News reports.

"The fact that bail was granted is not necessarily a victory for the defense because the terms of bail are so onerous," CBS News legal analyst Lisa Bloom said. "This indicates that the judge wants to be sure that Strauss-Kahn appears for trial and perhaps that there is some serious evidence that has given this judge some pause."

The 62-year-old Strauss-Kahn has been behind bars since Saturday after he was accused of trying to rape a hotel maid. He has denied breaking any laws.

"I am willing to sign off on the bond," Obus said Friday. "But I just want to be clear that no one will be released until all conditions have been met."

Defense lawyer Marc Agnifilo told the judge that "certain complications have arisen." However, he wouldn't say more as published reports circulated that the building where Strauss-Kahn planned to live wouldn't accept him.

Lawyers arguing whether Strauss-Kahn should get out of jail while he awaits trial on attempted rape charges have used two famous examples from different sides of the spectrum to make their case — Roman Polanski and Madoff.

Prosecutors brought up Polanski, the French filmmaker whom U.S. authorities pursued for decades after he jumped bail in a 1977 child sex case.

Defense lawyers have mentioned Madoff, the financier who was freed on high bail and strict house arrest, the same conditions that a judge approved Thursday for Strauss-Kahn.

The judge agreed to free him on bail — provided he's confined to a New York apartment, under armed guard and electronic monitoring.

Authorities have not said where Strauss-Kahn would be detained once he left jail, but police and media thronged around a luxury residential hotel on the Upper East Side. Dozens of news crews set up metal barricades outside the high-rise on East 65th Street.

"It's a great building. Very posh, very chic" said Marion Tarnofsky, who lives down the street.

The Department of Correction said in a statement Friday that it will manage Strauss-Kahn's release following the posting of bail and all required paperwork. A corrections spokeswoman said no details about timing or location of the transfer would be provided, but confirmation would be given of his release from custody.

The 62-year-old French economist and diplomat briefly wore an expression of relief after Obus announced his bail decision in a packed courtroom Thursday. Later, Strauss-Kahn blew a kiss toward his wife.

Strauss-Kahn didn't speak during the court proceeding. But as he headed back to jail for what he hoped would be a final night, lawyer William W. Taylor called the bail decision "a great relief for the family" and said Strauss-Kahn's mindset was "much better now than before we started."

The ex-IMF head is accused of attacking a 32-year-old housekeeper Saturday in his $3,000-a-night hotel suite. The West African immigrant told police he chased her down a hallway in the suite, forced her to perform oral sex and tried to remove her stockings.

"The proof against him is substantial. It is continuing to grow every day as the investigation continues," Manhattan assistant district attorney John "Artie" McConnell told the judge Thursday as prosecutors announced that Strauss-Kahn had been indicted on charges including attempted rape and a criminal sex act.

The indictment, a crucial procedural step in a felony case, marked a grand jury's "determination that the evidence supports the commission of nonconsensual, forced sexual acts," District Attorney Cyrus R. Vance Jr. said. Strauss-Kahn, whose lawyers have suggested evidence won't support a forcible encounter, is due back in court June 6.

The bail decision came less than a day after Strauss-Kahn resigned as managing director of the IMF, the powerful organization that makes emergency loans to countries in financial crisis.

In his resignation letter, he denied the allegations against him but said he would quit in order to "protect this institution which I have served with honor and devotion" and to "devote all my strength, all my time and all my energy to proving my innocence."

Prosecutors had argued against his release, citing the violent nature of the alleged offenses and saying his wealth and international connections would make it easy for him to flee.

At his arraignment Monday, a prosecutor suggested that if Strauss-Kahn were released and ran, he could end up "just like Roman Polanski," whom the Swiss government declined to extradite last year in the child sex case in the U.S. in which he had jumped bail decades ago.

On Thursday, defense lawyers offered a notorious example of their own: Madoff, the fraudulent financier who stole billions of dollars from investors. Before Madoff pleaded guilty in the federal case and was sentenced to 150 years in prison in 2009, he was freed on $10 million bail, under house arrest and private guard provided by the same firm Strauss-Kahn's lawyers have proposed to monitor him. Taylor cited Madoff as he noted in court that "there have been other high-profile cases where (defendants) have been released."

Taylor called the proposed arrangement "the most restrictive possible conditions," although he suggested few precautions were necessary.

"In our view, no bail is required to confirm Mr. Strauss-Kahn's appearance. He is an honorable man. He will appear in this court and anywhere else the court directs, and he has only one interest at this time, and that is to clear his name," Taylor said.

A different judge had ordered Strauss-Kahn held without bail Monday; his lawyers subsequently added home confinement to their bail proposal. His wife, the French television journalist Anne Sinclair, has rented a Manhattan apartment for the couple, Taylor said.

Obus said the conditions played a major role in his decision to allow bail, but he warned Strauss-Kahn he might reconsider "if there is the slightest problem with your compliance."