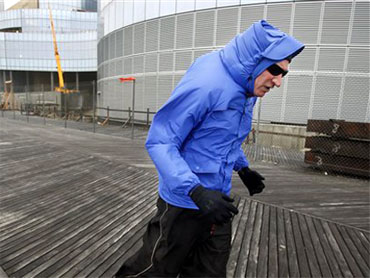 Strong winds and heavy rain pounded parts of the Northeast on Saturday, knocking out power to more than a half-million homes and businesses and stranding about 500 passengers on a New York-bound train for more than six hours.

The New Jersey Transit train became stuck on the tracks more than halfway through its trek from Trenton to New York City along the Northeast Corridor line, spokeswoman Penny Bassett Hackett said.

A diesel engine would pull the train to the Rahway station, where buses would meet the passengers and take them to Newark Penn Station, Hackett said. Passengers were stuck on the train for six to seven hours Saturday, spokesman Dan Stessel said.

It was the second time in two weeks that more than 500,000 homes and businesses in the Northeast were left in the dark after a powerful storm.

Lois Glassman, 62, of Manhattan boarded an Amtrak Acela train in Washington D.C. at around 4 p.m. Saturday. The train traveled seamlessly through Philadelphia but slowed outside a station in Edison, N.J., at about 6:30 p.m. Then the waiting began.

The conductor on the train kept the passengers updated, Glassman said, first blaming switching problem and later power issues. It wasn't until after 11 p.m. that the train began making its way toward New York, Glassman said.

The storm pounded the New York City area and southern New Jersey with wind gusts of up to 70 mph recorded and widespread outages.

Flights at Newark Liberty International Airport were delayed by as many as four hours Saturday.

Logan International Airport in Boston received nine overseas flights bound for New York because the planes no longer had the fuel to wait for clearance to land at John F. Kennedy International Airport, said Massport spokesman Matthew Brelis. Among the planes diverted because of heavy rain and high winds was the double-decker Airbus A-380, the biggest commercial passenger jet in the world.

Customers from Long Island to the northern suburbs of New York City were in the dark as utility company crews worked to restore power. Consolidated Edison reported more than 125,000 without power in New York City and parts of Westchester County by about 11 p.m., while Long Island Power Authority had more than 140,000 customers without electricity.

In Uniondale, N.Y., the aging Nassau Coliseum lost three pieces of the aluminum facade surrounding the building about 90 minutes before the start of the New Jersey Devils and New York Islanders National Hockey League game. The main box office exit was closed, but no one was injured.

In New Jersey, Public Service Electric & Gas reported as many as 200,000 customers without power, and Atlantic City Electric said more than 35,000 customers were in the dark.

About 70,000 customers in the Philadelphia area were without power Saturday, Pennsylvania Electric Co. said.

In Atlantic City, the horizontal arm of a boom crane plunged 47 floors at the Revel Casino construction site. Debris went flying and crashed through the driver's side window of a police cruiser, injuring Atlantic City police Officer Brian Hurley.

Teaneck police were investigating whether two people found dead Saturday night were killed by a falling tree. The tree took down power lines as it fell.

Chief Robert Wilson told The Record of Bergen County that police believe the two were walking on the sidewalk. Teaneck is a suburb of New York City.

Two condominium complexes near the construction site were evacuated and several area roads were briefly closed. A shelter was set up at the Atlantic City Convention Center. The wind also caused at least two homes to collapse and damaged other homes and buildings.

"This is not where I expected to be tonight," said Jerome Martin, who was evacuated from his nearby condo to the Atlantic City Convention Center. "I'd rather be in my home, but that's not going to happen."

Martin said he and his family were hoping they would get a motel room, otherwise they would have to sleep on cots in the convention center with the dozens of other evacuees. He said he was told it could be days before he could return home.

Pittsburgh had braced for what meteorologists were calling the worst potential for flooding since remnants of Hurricane Ivan swept through the city in September 2004. Officials worried that a forecast of warm weather and several days of rain would cause deep snow in the mountains to melt, prompting rivers to swell.

But officials downgraded some of their river crest projections Saturday in western Pennsylvania as rainfall appeared to be less than was projected.

Flood warnings were issued for several rivers in northern Jersey, including the Ramapo River at Mahwah and Saddle River at Lodi, where minor to moderate flooding was expected Saturday night and Sunday. Coastal flood warnings were in effect for the Jersey Shore.

At least 4 inches of rain had fallen Saturday in parts of New Jersey, and an additional 1 to 2 inches was expected through early Sunday.

Two weeks ago, a slow-moving winter storm smacked the Northeast, unleashing heavy snow, rain and hurricane-force winds while knocking out power to more than a million homes and businesses. The 2009-2010 winter season has been the snowiest on record for several East Coast cities, including Washington, D.C., Baltimore and Philadelphia.