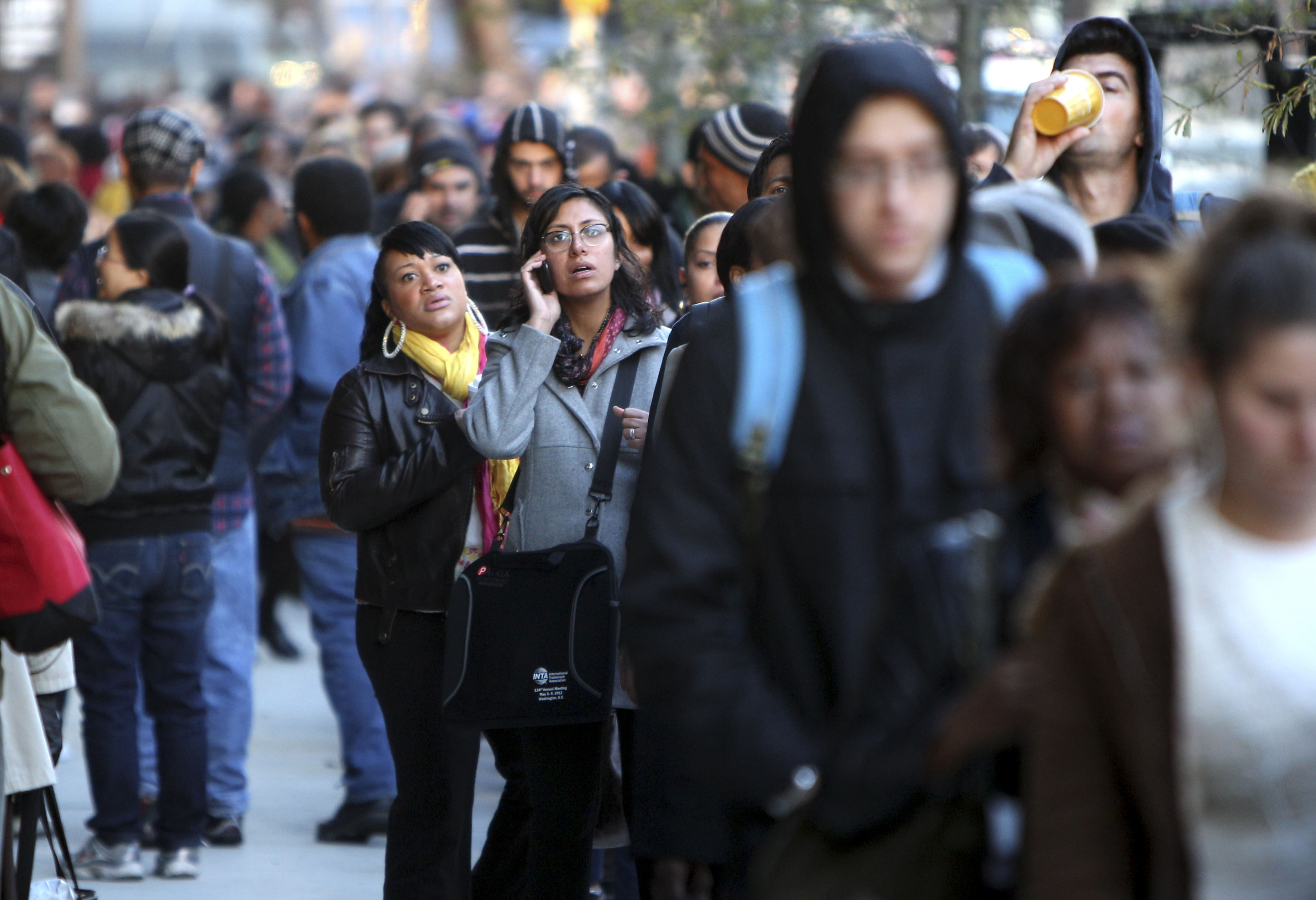 Ridership was light in the morning, and the trains couldn't take some New Yorkers where they needed to go. There were no trains in downtown Manhattan and other hard-hit parts of the city, and people had to switch to buses.

Drivers are dealing with a traffic nightmare after a minimum passenger mandate took effect Thursday morning in an attempt to ease gridlock in Manhattan, CBS New York reports.

Mayor Michael Bloomberg said the New York City death toll from Sandy is now 38. The number is called "fluid" as reports come in from first responders.

The mayor, who announced that the city's public schools will reopen on Monday, also said that distribution of meals and bottles of water would start Thursday in some of the city's hardest-hit areas, including Coney Island, Staten Island's South Shore, Chinatown and the Rockaways.

People were grateful even for the limited train service. Ronnie Abraham was waiting at Penn Station for a train to Harlem, a trip that takes 20 minutes by subway and 2 and a half hours on city buses that have been overwhelmed since resuming service Tuesday.

"It's the lifeline of the city," Abraham said. "It can't get much better than this."

But many residents without subway service were not so lucky. In front of the Barclays Center in Brooklyn, a line to wait for buses into Manhattan stretched twice around the arena and commuters reported wait times of one to three hours to get on a bus.

Other New Yorkers, without power for a third full day and growing dispirited, decided to flee the city. They worried about food and water and, in some cases, their own safety.

"It's dirty, and it's getting a little crazy down there," said Michael Tomeo, who boarded a bus to Philadelphia with his 4-year-old son. "It just feels like you wouldn't want to be out at night. Everything's pitch dark. I'm tired of it, big time."

Rima Finzi-Strauss was taking a bus to Washington. When the power went out Monday night in her apartment building on the Lower East Side of Manhattan, it also disabled the electric locks on the front door, she said.

"We had three guys sitting out in the lobby last night with candlelight, and very threatening folks were passing by in the pitch black," she said. "And everyone's leaving. That makes it worse."

She said people were on the street buying "old, tiny little vegetables" and climbing 20 floors into apartments where they wouldn't flush the toilet, and without heat. New York dipped to about 40 degrees Wednesday night.

After reopening airports, theaters and the stock exchange, city officials hoped the subway would ease the gridlock that had paralyzed the city, forcing cars and pedestrians to inch through crowded streets without working stoplights.

The backup was up to 10 miles in places, CBS New York reported.

Traffic was backed up in every direction at the Ed Koch Queensboro Bridge where police set up a checkpoint at the mouth of the span leading into Manhattan, CBS 2's Kathryn Brown reported. One commuter said they waited three hours to get onto the bridge

Flights took off and landed Thursday at LaGuardia Airport, the last of the three major New York-area airports to reopen since the storm, which killed more than 70 people across the Northeast and left millions without power.

Across the region, people stricken by the storm pulled together, providing comfort to those left homeless and offering hot showers and electrical outlets for charging cellphones to those without power.

The spirit of can-do partnership extended to politicians, who at least made the appearance of putting their differences aside to focus together on Sandy.

President Obama joined Republican Gov. Chris Christie, who had been one of the most vocal supporters of Republican presidential hopeful Mitt Romney, to tour the ravaged coast. But the two men spoke only of helping those harmed by the storm.

New York Sen. Chuck Schumer announced Thursday that New York State and New York City would be reimbursed 100 percent by FEMA for Sandy recovery costs. "This is a national disaster," he said.

On Wednesday, masses of people walked shoulder-to-shoulder across the Brooklyn Bridge to Manhattan for work, reversing the escape scenes from the Sept. 11 terror attack and the blackout of 2003.

Downtown Manhattan, which includes the financial district, Sept. 11 memorial and other tourist sites, was still mostly an urban landscape of shuttered bodegas and boarded-up restaurants. People roamed in search of food, power and a hot shower.

From West Virginia to the Jersey Shore, the storm's damage was still being felt, and seen.

In New Jersey, signs of the good life that had defined wealthy shorefront enclaves like Bayhead and Mantoloking lay scattered and broken: $3,000 barbecue grills buried beneath the sand and hot tubs cracked and filled with seawater.

Nearly all the homes were seriously damaged, and many had disappeared.

"This," said Harry Typaldos, who owns the Grenville Inn in Mantoloking, "I just can't comprehend."

Most of the state's mass transit systems remained shut down, leaving hundreds of thousands of commuters braving clogged highways and quarter-mile lines at gas stations.

Farther north in Hoboken, just across the Hudson River from Manhattan, nearly 20,000 people remained stranded in their homes, amid accusations that officials have been slow to deliver food and water.

One man blew up an air mattress and floated to City Hall, demanding to know why supplies hadn't gotten out. At least one-fourth of the city's residents were flooded, and 90 percent were without power.

The outages forced many gas stations across the state to close, resulting in long lines of people looking to fuel cars and backup generators. Darryl Jameson of Toms River waited more than hour to get fuel.

"The messed-up part is these people who are blocking the roadway as they try to cut in line," he said. "No one likes waiting, man, but it's something you have to do."

On New York's Long Island, bulldozers scooped sand off streets and tow trucks hauled away destroyed cars while people tried to find a way to their homes to restart their lives.

Richard and Joanne Kalb used a rowboat to reach their home in Mastic Beach, filled with 3 feet of water. Richard Kalb posted a sign on a telephone pole, asking drivers to slow down: "Slow please no wake."

Five-foot snow drifts piled up in West Virginia, where the former Hurricane Sandy merged with two winter weather systems as it went inland. Snow collapsed parts of an apartment complex, a grocery store, a hardwood plant and three homes.

The sixth person killed in the state was a candidate for the state House, John Rose Sr., who was struck by a falling tree limb. His name will remain on the ballot on Election Day.

A few more inches might fall in West Virginia, but meteorologists said the remnants of the storm are in the Appalachian Mountains and will be gone by the end of the week.