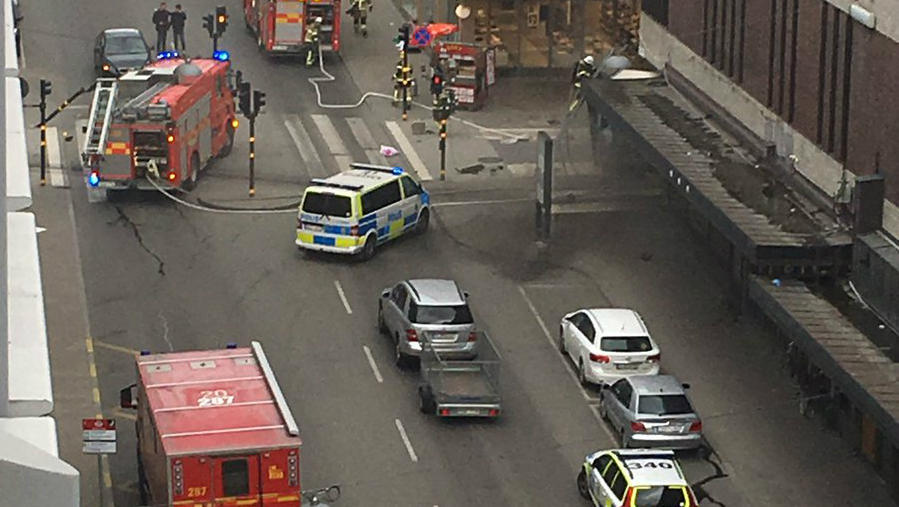 STOCKHOLM -- A hijacked beer truck crashed into an upscale department store in central Stockholm on Friday, killing four people and injuring 15 more, according to Stockholm police. Nine of those injured are in serious condition.

Swedish police say they have arrested one man “whom we are particularly interested in” as a nationwide manhunt got underway for the person or persons responsible. The man was “in the vicinity” of the truck crash and spotted by a police patrol, police said in a news conference. The man was in a police photo released earlier Friday wearing a greenish hood at the top of an escalator.

In a nationally televised press conference shortly after the attack, Swedish Prime Minister Stefan Lofven said all indications point to the incident being a terrorist attack.

“Sweden has been attacked,” Lofven said. “This indicates that it is an act of terror.”

“We have no contact with the person or persons who drove the truck,” Sweden’s top police chief, Dan Eliasson, told a news conference.

The head of Sweden’s security agency, Anders Thornberg, said agents are “conducting intensive intelligence work to identify the person or persons behind the attack.”

Live television footage showed smoke coming out of the upscale Ahlens department store on the city’s pedestrian street Drottninggatan, the store the truck smashed into about 3 p.m.

People in the downtown area fled in panic, and Stockholm’s nearby Central Station for trains and the subway, a few hundred yards away, was evacuated. All trains to and from the main station were halted. Two large shopping malls in Stockholm were shut down.

There was no immediate claim of responsibility for the attack.

“We stood inside a shoe store and heard something ... and then people started to scream,” witness Jan Granroth told the Aftonbladet daily. “I looked out of the store and saw a big truck.”

Photos from the scene showed a beer truck sticking out of the department store. A representative with Swedish beer maker Spendrups confirmed to CBS News that one of its trucks was hijacked earlier Friday as the driver was unloading the truck.

Lofven, the prime minister, who was visiting a school in central Sweden hit by a bus crash Sunday that killed three high school students, said he and the Swedish government were being updated on developments.

Friday’s incident is near the site of a December 2010 attack in which Taimour Abdulwahab, a Swedish citizen who lived in Britain, detonated a suicide bomb, killing himself and injuring two others.

Abdulwahab rigged a car with explosives in the hope that the blast would drive people to Drottninggatan - the street hit Friday - where he would set off devices strapped to his chest and back. The car bomb never went off, and Abdulwahab died when one of his devices exploded among panicked Christmas shoppers.

The incident comes less than three weeks after a man drove an SUV at high speed down the sidewalk of a bridge in London in an attack that ended with him stabbing a police officer on the grounds of the British Parliament before being fatally shot by police.