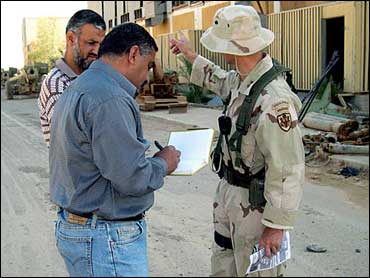 Frustrated weapons hunters are turning away from outdated U.S. intelligence leads, which have failed to turn up any evidence of chemical, biological or nuclear arms in Iraq after 10 weeks.

Teams are now moving toward their own intelligence gathering, based on interviews with Iraqi scientists, factory workers and even neighbors who lived near shadowy operations once run by Saddam Hussein.

The switch comes at a time of lowered expectations and increased frustration among the searchers. President Bush has said he began the war to disarm Saddam. But there has been no sign of either the ousted leader or the weapons he long denied having.

In the war's early days, American officers said they expected to find such huge stockpiles of unconventional weapons that their main concern was whether they had enough people to destroy the materials.

"It never occurred to anyone, not even for 10 seconds, that we wouldn't find any," said Capt. David Norris, who heads Mobile Exploitation Team Charlie.

The team — one of four originally assigned to analyze evidence of weapons of mass destruction — is no longer part of the search. Its criminal investigators, linguists and counterintelligence experts are now looking for evidence of crimes against humanity that Saddam's regime may have committed.

MET-C has stumbled on some documents it hopes may help investigators piece together cases against the ousted leadership. But Norris said only a few of the 30 sites they've visited have produced results.

Two other teams are still involved with the weapons search, though no longer exclusively.

The teams had been working under the 75th Exploitation Task Force. But their work will soon fall under the Iraq Survey Group, a new Pentagon effort that will deploy in Iraq in coming weeks and take charge of investigations into everything from potential weapons to Saddam's alleged terrorist connections.

"The frustration level is increasing as we keep getting constant negative results," said Lt. Col. Keith Harrington, 42, who spent years in the Special Forces before joining the Pentagon.

"Intelligence needs to play a main role here," he said at the team headquarters in a windowless, concrete cabana along a man-made lake outside Baghdad.

More than a dozen officers and soldiers interviewed recently complained about the quality of information they've been given.

"The initial intelligence we got was old, and the target folders are designed more for internal analysis than site exploitation," said Col. Tim Madere, the senior officer for unconventional weapons with the Army's V Corps.

Col. John Connell, who will oversee the survey teams under the new setup, said the task force will "bring in people with the background to attack sites more comprehensively."

The original teams weren't designed to carry out the kind of detective work that U.N. inspectors mastered over their years in Iraq, mostly because military planners were convinced such weapons would be easily found once Saddam was gone.

But the sites expected to yield the greatest finds came up dry.

Last week, one team began interviewing nuclear physicists in their Baghdad homes. Norris' team is questioning neighbors who lived near intelligence installations. And Harrington asked his team to develop questions for site managers and other Iraqis they come across.

On Friday, Harrington's team hauled equipment aboard two Black Hawk helicopters and flew for 2½ hours across western Iraq to a suspected storage facility 250 miles from Baghdad.

An undated satellite image of the site showed seven buildings along the edge of an abandoned stone quarry called Rutbah, which U.N. inspectors had visited.

When Harrington's team arrived, they found only three structures on the dusty property, including a shed and a small shack.

Bags of mustard-colored sand were piled against the shed's back wall. "Oh, here's the yellowcake," one British soldier on the team joked, referring to a powdered form of uranium used in producing nuclear weapons.

Humor and camaraderie among team members helps ease the pressures from hunting for weapons of mass destruction with the world watching. It's also a way to keep spirits up in the blistering heat that bakes soldiers day and night.

After only 30 minutes at Rutbah, Harrington deemed it a "dry hole." But on a tip from the 3rd Armored Calvary Regiment patrolling the area, he took his team to what had been described as a "suspicious-looking town."

It turned out to be a farm recently taken over by a family of shepherds. Harrington talked with the head of the household, then viewed his sheep pen, an untended field of lavender and several mangy dogs.

An hour later, his team was back on the helicopters and headed to Baghdad. It had nothing to report.

The problem was familiar to Madere, who has worked with all the search teams.

"We're trying to make the case to the higher-ups that we need more specifics," he said.