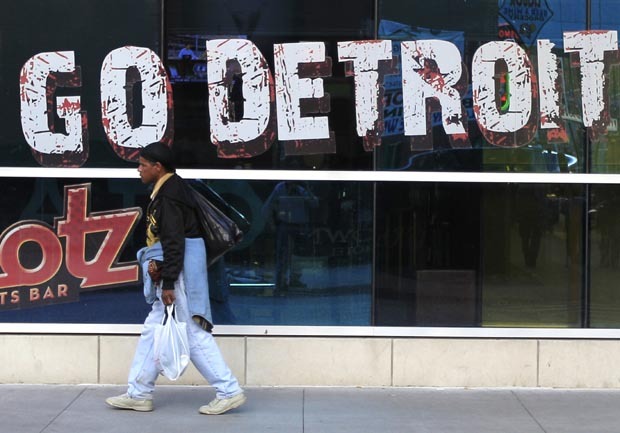 DETROIT An ace pitcher and some of the game's best sluggers are the winning combination that has put the Detroit Tigers in the World Series for the second time since 2006. But miles away from Comerica Park, much of the city still seems many seasons from its own grand slam.

When the Series returns to Detroit Saturday for Game 3, TV viewers will get a glimpse of a vibrant downtown, including Comerica, the General Motors towers, popular restaurants and flashy casinos. High-end grocer Whole Foods is building its first Detroit store north of Comerica, and wealthy investors are snapping up vacant buildings and filling them with workers.

Yet beyond this pocket of revitalization, much of Detroit still is struggling to make a comeback after the Great Recession sent the city and the auto industry on a perilous plunge. Public finances are unstable, thousands of homes sit vacant, homicides are on the rise and many residents have left or want to leave.

"In `06, it wasn't as intense as it is now," said barber Thomas Carter, referring to the Tigers last trip to the World Series as he cut hair at the C-Spot, 15 miles northwest of Comerica Park. "The city is in more desperation today. The blight and the black eyes weren't as bad."

Indeed, life in the neighborhoods seems a world away from downtown. The area around the ballpark has been a bright spot for the otherwise struggling city, and its success has been difficult to replicate.

Downtown's rise took years to take hold. Tigers' owner Mike Ilitch reopened the rehabbed Fox Theatre in 1988, starting a slow revival along the historic, brick-paved artery, Woodward Avenue. In 2000, Ilitch moved the Tigers to a new stadium across the street from the Fox. Others have followed, including the Detroit Lions and its Ford Field, home of the 2006 Super Bowl.

The area is now buzzing. The new owners of Detroit Medical Center are investing hundreds of millions of dollars in hospitals. Employers are successfully offering subsidies to get workers to live downtown or in Midtown. Quicken Loans founder Dan Gilbert has acquired nearly a dozen buildings and other properties, even luring Chrysler as a tenant and renaming the building after the automaker.

"Government is in terrible shape but entrepreneurs are thriving," said Joel Landy, who has no-vacancy signs on his rehabbed apartment buildings in and near downtown. "It's the proximity to large institutions and the central business district, and the fact that we're surrounded by five freeways with the ability to get in and out. ... It's slower out in the neighborhoods but remember: Detroit is 140 square miles."

Downtown shines partly because its attractions — sports teams, casinos, fine arts — are enjoyed by suburbanites who head out of the city as soon as the show or game is over. To former council member Sheila Cockrel, the distinction between downtown and the neighborhoods is a modern day "tale of two cities."

"There's exciting momentum going on. But on the other hand, we've had what's now close to a collapse of city services," said Cockrel, who teaches at Wayne State University.

City government staved off a state takeover last spring after agreeing on many reforms, including an independent board to oversee public finances, which are burdened by more than $12 billion in pension obligations and dwindling tax revenue.

Mayor Dave Bing this week pleaded with the City Council to hire turnaround firms to examine city operations. The police chief recently quit because of an affair with another officer, forcing the city to search for a fifth top cop in four years. There were 311 homicides through Oct. 21, more than at the same point in 2011, and vast stretches of deserted neighborhoods have become a dumping ground for bodies. Earlier this month, Detroit was named the nation's most dangerous city for the fourth year in a row by Forbes magazine.

In places, the city is almost pockmarked. Under the flashy neon lights of the MotorCity Casino in Corktown, one of Detroit's oldest neighborhoods, a half dozen newer and vibrantly painted homes stand at the corner of Harrison and Sycamore amid a few empty lots and vacant houses.

An older home with peeling pink paint over red bricks holds down one corner, tucked between two vacant houses next door. Blue spray paint indicates water was shut off "8/2/11"ahead of a wrecking ball that never swung. Across the street is a yellow house with a tidy yard, protected by a 6-foot stockade fence from the vacant house with crumbling porch and high weeds on the other side.

More than 30,000 houses are empty. Though pockets of Detroit are relatively stable, others are flat-out dangerous, with the abandoned homes breeding drug trafficking and other crimes. The city's population has dropped 25 percent since 2000, and a recent survey found four out of every 10 residents plan to dash, too.

Reliable bus service is a chronic complaint. William Smith, 43, helped his girlfriend board a bus on the west side this week to a nursing job in the suburbs. While waiting, she sat on a broken light pole that rested on the sidewalk.

Smith, a laborer, said he's unemployed after having his van and tools worth $7,000 stolen from his driveway.

"If you ain't got a car, you're out of luck when it comes to finding many jobs. There ain't no jobs in the city," he said.

Lanard Strong, 38, was shot in the arm and leg in 2008 while withdrawing cash from an ATM. Tired of blight and corruption, he doubts he can sell his house on the west side. "I've always wanted to just leave," he said.

Despite the obstacles, a can-do spirit always seems to be in the next block. On Saturday, just hours before Game 3, volunteers will haul plywood and swing hammers to board up 150 abandoned homes near a high school on the west side. The goal is to save homes that could be occupied in better times, as well as improve safety for kids who walk past urban wrecks.

And back at the C-Spot, they're rooting for the Tigers.

"We're hungry for something to laugh and smile about," owner Crystal Jackson said. "We live in such hard times right now in the city of Detroit. Something as small as sport is looked at bigger than it actually should be."