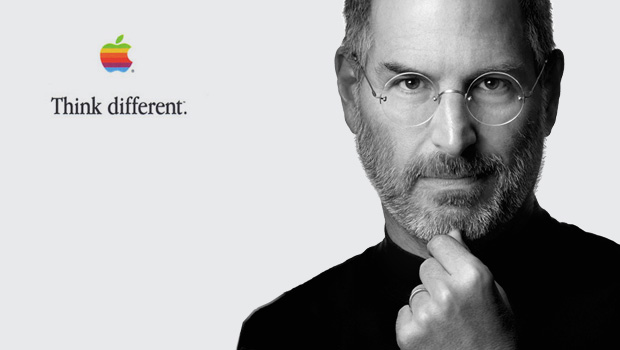 If there were an epitaph that perfectly describes Steve Jobs' life on earth, it is one that he helped craft himself for the iconic "Think Different" Apple advertising campaign.

"Here's to the crazy ones. The misfits. The rebels. The troublemakers. The round pegs in the square holes. The ones who see things differently. They're not fond of rules. And they have no respect for the status quo. You can quote them, disagree with them, glorify or vilify them. About the only thing you can't do is ignore them. Because they change things. They push the human race forward. And while some may see them as the crazy ones, we see genius. Because the people who are crazy enough to think they can change the world, are the ones who do."

The ad campaign, created with Chiat/Day, debuted September 28, 1997, just days after Jobs became the "interim" CEO of Apple and 12 years after he was forced out of the company he co-founded in 1977.

In typical Jobs fashion he oversaw, tweaked and massaged the text, and chose the images of those who he thought pushed the human race forward and were to represent to the world the reincarnation of the company and the return of a wiser and more experience king of Silicon Valley.

Over the 25 years Jobs worked at Apple, the company was an extension of himself and his vision for computing, industrial design, and a digital lifestyle.

Apple co-founder Steve Jobs dead at 56
Video: Steve Jobs retrospective
Video: The charisma of Steve Jobs: From the Mac to the iPad
Steve Jobs steps down from Apple

Jobs more lasting legacy will be his impact on disrupting entire industires, bringing the music business kicking and screaming into the 21st century and transforming the mobile device landscape.

He was not an inventor in the classic sense, tinkering with program code to create the Worldwide Web or tinfoil to reproduce sounds on a phonograph.

Jobs was more of an orchestral conductor, charismatic and dictatorial, assembling the people and pieces of existing and emerging technology to craft an object of desire that reflected his personal aesthetic and vision for how people and machines should interact.

It was an expression of American individualism, buoyed by the kind of self-confidence that insists on pursuing a personal vision regardless of the risk.

Steve Jobs thought different. In his time on earth he pursued with intense focus his vision to create "insanely great" products for what he called "mere mortals." He changed the world and pushed the human race forward.

"You can't connect the dots looking forward you can only connect them looking backwards. So you have to trust that the dots will somehow connect in your future. You have to trust in something: your gut, destiny, life, karma, whatever. Because believing that the dots will connect down the road will give you the confidence to follow your heart, even when it leads you off the well worn path."--Steve Jobs, Stanford Commencement Address, 2005

Georgia is now averaging 24 deaths over the past week, the highest level in nearly four weeks.