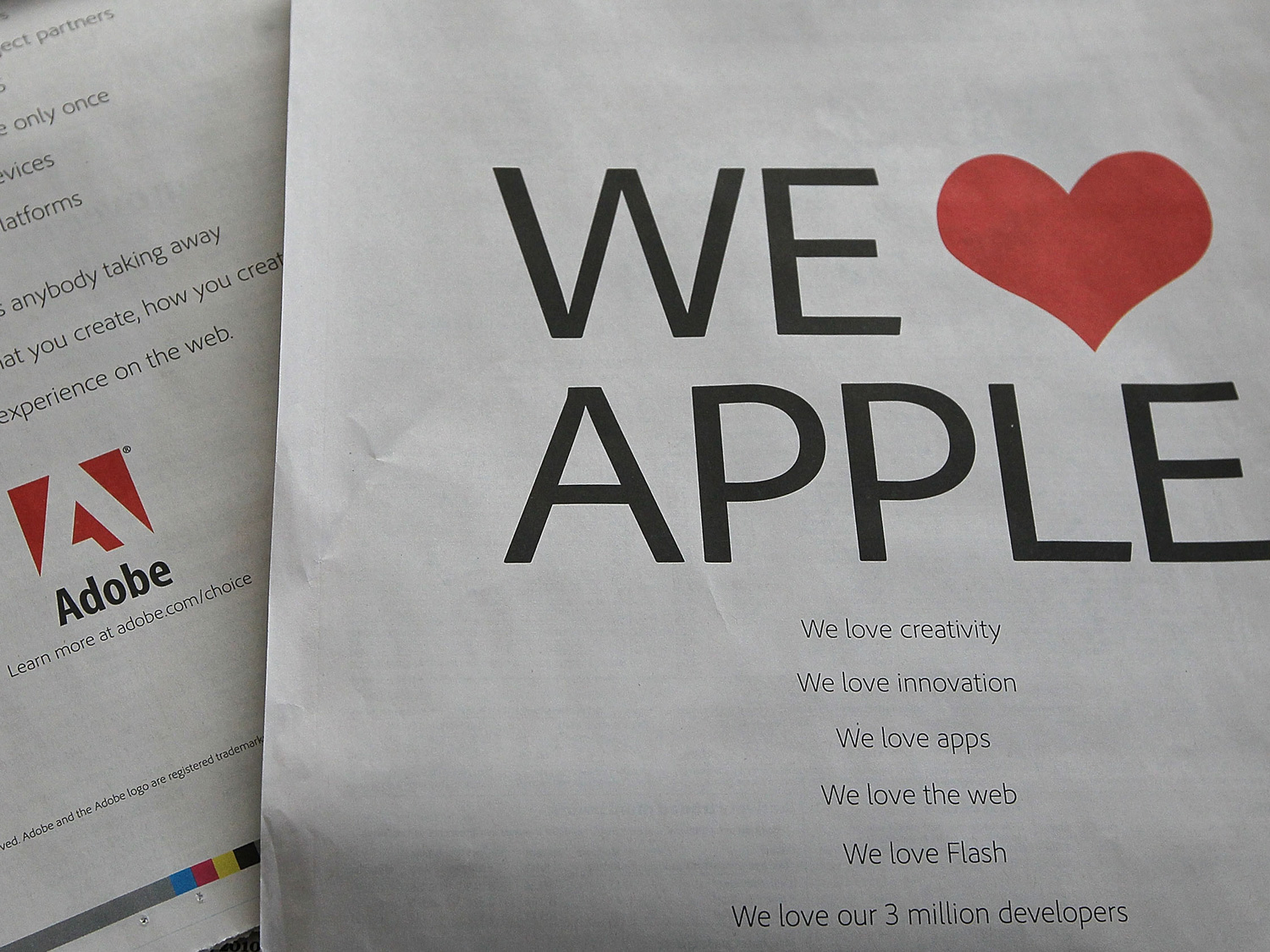 In April, 2010, Steve Jobs devoted about 1,700 words to a public post ripping Adobe's Flash to shreds. His most cutting comments concerned the mobile version of Flash.

In other words, Adobe was offering a mediocre technology that wasn't able to stand up to the demands of smartphone users - or at least those who were not in the mood to smash their heads against the wall when their pages crapped out because of Flash's idiosyncrasies. The missive was written to rationalize Apple's decision to no longer allow apps compiled with Flash to run on the iPhone, iPod, or the iPad.

Adobe was understandably aghast and responded with a public relations offensive, framing this as a question of industry politics and open access with Apple playing the role of the heavy.

"We are ready to enable Flash in the browser on these devices if and when Apple chooses to allow that for its users, but to date we have not had the required cooperation from Apple to make this happen," Kevin Lynch, the company's chief technology officer, wrote at the time in a public post. For good measure, he added that those who suggested HTML "as eventually supplanting the need for Flash" were wrong. "I don't see this as one replacing the other, certainly not today nor even in the foreseeable future."

That was the kinder, gentler version. Lee Brimelow, a "platform evangelist" at Adobe, skewered Apple for attempting to enforce a "tyrannical control over developers...more importantly, wanting to use developers as pawns in their crusade against Adobe."

"Personally," he wrote, "I will not be giving Apple another cent of my money until there is a leadership change over there. I've already moved most of my book, music, and video purchases to Amazon and I will continue to look elsewhere. Now, I want to be clear that I am not suggesting you do the same and I'm also not trying to organize some kind of boycott."

The funny thing is that Brimelow was right. Jobs was attempting to enforce his will over the rest of the industry because he simply thought he knew better than anyone else. But for anyone who followed Apple's co-founder through the years, that was hardly news. Jobs go-it-alone strategy dating back to decision to maintain the Mac's closed architecture was always controversial and invited criticism and told-you-so's from a legion of naysayers when Apple was on the brink around the time he returned to the company with the late December 1996 buyout of NeXT

But here was one more case where Jobs' sense of technology aesthetics got it right. CNET contributor Harry McCracken wrote a piece earlier this year that must have left Adobe wincing. It carried the title "Mobile Flash: Always Exciting, Always Not Quite Here Yet." (And the headline was the kindest part of the article to Adobe.) Harry concluded by revealing that when an upcoming version of mobile Flash got pitched, his instinctive response was: "That's fabulous-let me know when it's actually available on devices that real people can buy."

After all the sturm und drang, Adobe has now recast itself as ready to "aggressively contribute to HTML5," allowing that is "the best solution for creating and deploying content in the browser across mobile platforms."

One month after his death, it was one more proof point that the moniker attached to Steve Jobs as a technology visionary was well deserved.