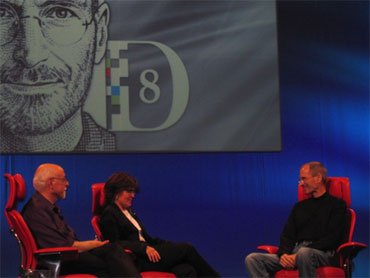 I  experienced the Jobs interview virtually via CNET's live blog written by Ina Fried who is on the scene at D8. The following is a synopsis of what Jobs said as studiously reported by Ina on the live blog.

Jobs shared much of his philosophy, which is based on "choosing which horses to ride very carefully." That was his explanation of ditching Flash, the 3.5-inch floppy disk and other technologies before competitors make the shift.

"We try to pick things in their 'springs.' If you choose wisely you can save your self an enormous amount of work," he said.

Regarding the controversy over dropping Flash, the popular video format from Adobe, in favor of newly established HTML 5, Jobs said: "We're trying to make great products for people. We at least have the courage of our convictions....We're going to take the heat because we want to make the best product in the world for customers...they are paying us to make those choices."

"If we succeed they''ll buy them, and if we don't, they won't. So far, I have to say that people seem to be liking iPads. We've sold one every three seconds since we launched it," Jobs said.

He was asked about the prototype iPhone lost in a bar by an Apple employee, sold to Gizmodo and now a legal case under investigation by San Mateo, CA prosecutors.

Jobs couldn't comment because of the ongoing investigation, but he said it was a great story and offered his own interpretation of what went down. "It's got theft. It's got buying stolen property. It's got extortion," he said. It probably has sex in there somewhere, he added. "Somebody should make a movie out of this," he concluded.

Asked about suicides at the Foxconn factory in China where iPhones are manufactured, Jobs said,  "We're all over this ... Foxconn is not a sweatshop. It's a factory, but they've got restaurants and movie theaters." He maintained that suicide rate at Foxconn has been 13 out of 400,000 for first half of year, which is under the U.S. rate of 11 per 100,000, but he still found the statistic troubling.

Jobs talked about competing with former ally Google (Google CEO Eric Schmidt used to be on Apple's board of directors) in many areas, especially in the smart phones arena. "They decided to compete with us and they are," Jobs said.

He was asked if he felt betrayed by Google.  "My sex life is pretty good these days. How's yours?" he quipped.

On the subject of AT&T's network, which is the only one available for the iPhone to date, Jobs admitted the carrier isn't improving as rapidly as he would like. "I do think they have some issues," he said.  There is speculation that Apple will add other carriers (Verizon, for example) in the U.S., but Jobs shed any light on the topic. He expects some improvements from AT&T this summer.

Mossberg asked Jobs why he built the iPhone before the iPad. "I'll tell you a secret. I actually started on tablet first," Jobs said. "I had an idea of a multitouch display that you could type on. About six months later they called me in and showed me this prototype display. This was in the early 2000s. I gave it to one of Apple's early UI [User Interface] folks who got inertia scrolling and other things working."

Swisher asked Jobs whether the iPad can save journalism. "We have a lot of goals for it, but one of my beliefs very strongly is that any democracy depends on a free, healthy press," he said.

He acknowledged that major newspapers are in trouble, but he doesn't want to "see us descend into a nation of bloggers."

"I think we need editorial now more than ever," he said. One way to overcome the economic hurdle is for people to pay for content, he added, and the iPad offers a way to have applications rather than just static web pages.  He advised publishers to "price aggressively and go for volume."

Will tablets replace the trusty PC? "When we were an agrarian nation, all cars were trucks because that's what you needed on the farms."  Cars came along as cities flourished. "PCs are going to be like trucks," Jobs predicted, as other form factors, like the tablet, become the "cars."

Jobs is of course bullish on the iPad as a platform for a broad variety of applications over time. He was asked about Apple's control of the platform, deciding which applications to bless and make available in its App Store.

"We have two platforms we support. One is completely open and uncontrolled and that is HTML 5. We support HTML 5. We have the best support for HTML 5 of anyone in the world. We then support a curated platform, which is the App Store."

He then explained the rules: the app has to function as advertised, can't crash and can't use unsupported APIs. Apple also had to come up with an anti-defamation rule, which has created some controversy. Political cartoons by Mark Fiore were banned at first, but later Apple relented. "We are guilty as charged of making mistakes. Nobody has ever done this before," Jobs said.

In terms of how Apple, Inc. functions, Jobs said that the company is organized like a startup. "We are the biggest startup on the planet. No committees. The whole meets once a week for three hours," Job said.

Jobs' workday consists of meeting with teams of people working on ideas. "We have wonderful arguments," Jobs said. The best ideas should win, he added, which help keep the best people around.  It's probably not unrealistic to suggest that Jobs wins more than his fair share of the arguments.

Swisher asked what he thought the next 10 years of life would be like. "When this whole thing with Gizmodo happened, I got a lot of advice from people that said you've got to just let it slide. You shouldn't go after a journalist because they bought stolen property and tried to extort you."

The famously relentless and perfectionist Jobs stated, "I can't do that. I'd rather quit."

Jobs will make his next scheduled public appearance on June 7 at the company's Worldwide Developers Conference (WWDC), where he will once again mesmerize the Apple fans with a keynote at 10 a.m. PST. He is expected to unveil iPhone OS 4 and offer some more hints about the next-generation iPhone 4G.