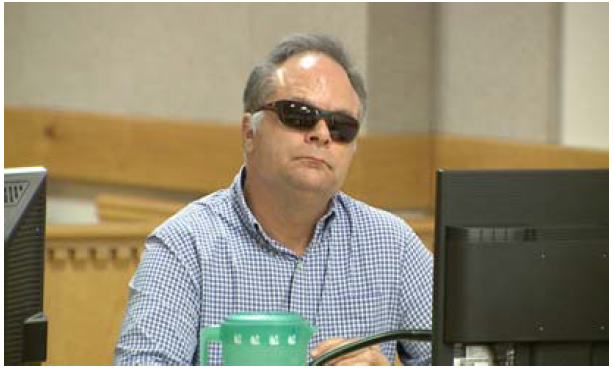 GREELEY, Colo. -- The former chairman of the Colorado Republican Party was sentenced to four years of probation and 300 hours of community service for voter fraud. Steve Curtis blamed a "major diabetic episode" for causing him to vote his ex-wife's absentee ballot in October 2016.

Curtis, 57, told District Judge Julie Hoskins Friday it was "a customary thing" for him to fill out his wife's ballot and he didn't know it was illegal, but he said he didn't remember doing it.

In October of 2016, Kelly Curtis called the Weld County Clerk and Recorder's Office to obtain her mail-in ballot. She was told she had already voted, CBS Denver reports.

The Weld County District Attorney's Office investigated and, using DNA evidence and handwriting analysis, alleged that Steve Curtis forged his wife's name on her ballot and mailed it to the clerk's office.

"He knew exactly what he was doing," said Deputy District Attorney Tate Costin during the trial's closing arguments. "He received it in the mail, opened it, voted, signed it, sealed it back up and sent it in. If he were going to sign a name during this confused diabetic state, wouldn't he sign his own name? Why her name? She hadn't even lived in the house for 11 months."

During the sentencing hearing Friday morning, Curtis shared a lengthy history of mental and physical ailments, and continued to claim he still doesn't remember signing his ex-wife's ballot.

"It was a normal and customary thing in my house with my prior wife and with Kelly (Curtis), to fill out their ballots. … I didn't know that was illegal," Curtis said Friday to Weld District Court Judge Julie Hoskins, according to the Greeley Tribune. "But at no time did I plan this, and I still don't remember doing it."

"He committed a selfish and arrogant crime," Coston said during Friday's sentencing. "This was not a product of a diabetic blackout. He did this out of spite and thought he'd get away with this. He not only took away his ex-wife's right to vote in the 2016 election, but this affected the nation. His one fraudulent vote created an insecurity in our system and created discomfort throughout the country. He is educated, successful and intelligent, yet he has never once taken responsibility for what he did and has blamed everything and everyone, including the sytem. Bottom line, he has absolutely no respect for the the law."

Coston asked the judge for a sentence including jail time with probation. Judge Hoskins instead decided on a penalty of four years probation and 300 hours of community service.

Steve Curtis, said District Attorney Michael Rourke following the December verdict, "saw an opportunity to vote twice in one of the most important presidential elections in recent history and intentionally defrauded our system. No matter the political party you belong to, we must always stand up to those who strip away the rights of others."

Steve Curtis served as the chairman of the Colorado Republican Party from 1997-99, and worked as recently as August 2017 as a talk show host on the radio station KLZ-AM 560 in Denver. The station's website no longer reflects Curtis's employment.