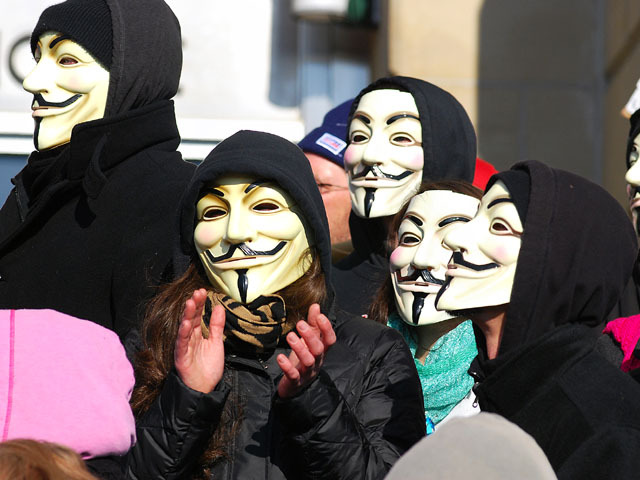 LOUISVILLE, Ky. -- A man who aligned himself with the hacker group Anonymous was indicted by a federal grand jury for allegedly conspiring to access an online account to draw attention to a 2012 high school rape case in Ohio.

Deric Lostutter - who went by the online name "KYAnonymous" - was charged in a conspiracy to gain access to the account and making false statements to authorities. The indictment said he joined with an unnamed co-conspirator with the online name "JustBatCat" to hack into a website and email account of a person who ran a booster website for Steubenville High School athletic teams.

The two hackers aimed to "harass and intimidate (the person who ran the website) and others, and gain publicity for their online identities," the indictment said. Their online actions in December 2013 drew media coverage to the rape case, in part by re-posting a video showing a former Steubenville, Ohio, student joking about the rape.

Two Steubenville football players were convicted in 2013 of raping a West Virginia girl at a party.

Lostutter's attorney, Tor Ekeland of Brooklyn, New York, said he was surprised that an indictment came down three years after Lostutter's home was raided by the FBI. Ekeland said he found out about the indictment Thursday night from a story on the internet.

"I don't understand why they are prosecuting somebody ... who basically helped expose the rape of a minor," said Ekeland, a specialist in defending people accused of computer crimes. He said the harm caused by alleged hacking was "minimal."

Lostutter told The Associated Press in 2013 that he posted the video on the fan website RollRedRoll, but he said someone else hacked into the website. He also said he could end up going to jail longer than the two convicted of raping the girl.

The indictment alleges Lostutter and the other hacker gained access to password-protected administrator account of the website. Later, Lostutter filmed a video of himself in a Guy Fawkes mask and "issued threats that he would disclose the personal identifying information of Steubenville High School students," the indictment said.

Lostutter was ordered to appear before a federal judge in Lexington on Aug. 9.

Lostutter did not reply Friday to an email. The indictment issued Thursday says he faces up to 16 years in prison if convicted.

Bloggers and hacker activists alleged a cover-up in Steubenville after the rape. The suspicions hinged on the presence of other students when the attack happened, including at least two who captured it on their cellphones.

Three teen witnesses were granted immunity from prosecution by a judge to allow them to testify against the two players.

The two players were sentenced to juvenile detention. Trent Mays was released in 2015 after serving a two-year sentence in an Ohio Department of Youth Services facility. Ma'Lik Richmond received a one-year sentence.