Author Stephenie Meyer is a frequent star on the young adult best-seller list, and her newest book out this weekend is likely to keep her streak going. Kelly Cobiella has the fine print...
This story was first broadcast August 3, 2008.

Then again, nothing in Stephenie Meyer's young career as a writer has happened quite the way you'd expect.

The reason for all the attention this past Friday night is the release of "Breaking Dawn," Meyer's fourth and final novel in her wildly-popular "Twilight" series, about a girl who falls head over heels for a vampire.

In four years, Meyer's fans have gobbled up eight million books with all the fury of a teenager in love.

"The screaming is a little bit 'wow,' Meyer laughed.

"You have a huge fan base," Cobiella said. "And they're true fans."

"They put the fanaticism right back into the word 'fan,'" Meyer said. "They're so dedicated. I mean, they're loyal and they get so excited. You wouldn't think it's about books. That always surprises me. You know, that's how I felt about books as a kid."

A healthy obsession for a girl growing up in Phoenix, one of six children in a conservative Mormon household.

"It was very 'Brady Bunch' at times," Meyer laughed. "But it was a really nice childhood. My parents were good parents."

…A role Meyer would soon take on herself as a wife and mother of three.

"So did you ever think during that time that there was a writer buried in there somewhere?" Cobiella asked.

"No. I never dreamed of being a writer. And I know that just sounds horrible because so many people do and they don't get this opportunity. But that to me was such a - I mean, how vulnerable is that, to do that and try for that? Because you know you're gonna fail, you know? Everybody tries for that."

Meyer got the idea for "Twilight" from a dream she had one night.

"It was June 2nd, 2003," she said. "I had this completely amazing dream that was just, you know, about first love. It was this boy and a girl in a meadow. And they were having this conversation that I was eavesdropping on in my dream. And it was about how compelled they were to be with each other and yet how hard it was for him not to kill her every second they were together. And I just thought, 'Whoo!'"

The girl, who would become Bella in the novels, was just an average teenager. The boy, Edward, was a vegetarian vampire, constantly fighting his desire to drink human blood.

"When I woke up, I was so mad, you know? Because it was right in the middle. I wanted it to continue! And I didn't wanna call up somebody and be, like, 'Oh, let me tell you about this dream.' Everybody hates that.

"So I wrote it down. I had made my dream into a real existence. And I was hooked on writing from that day."

The problem was Meyer already had a full-time job - a very full life with three kids - while writing a book on the side.

"Well, I didn't know it was a book," Meyer said. "I was writing this story. I don't really know how I thought of it myself. It was just this thing I was doing.

"So while I'm making breakfast for the kids and my husband was getting them off, I was thinking about, you know, what's going to happen? And what are they going to say now? It was coming so fast. The problem was not being able to type fast enough.

"And when every time the kids needed something, I was pretty bad. I'd be, like, 'Ugh, I have to get up and get him an apple! That line was so good.'"

Meyer says, despite how hard it was to juggle responsibilities and creativity, that it was probably the most enjoyable summer of her life."I started in June. And at the end of August, I started thinking, 'I just wrote a book.'"

Getting it published would happen just as quickly.

"I sent out, I think, 15 queries total. I got nine rejections, five no responses, and one assistant who pretended to be acting on behalf of an agent who asked to see it. October, I got my agent. And November I had a deal with Little, Brown, my publisher. That was not quite six months.

"One day I'm just staying up writing a story for fun. And the next day I have a career."

Her third novel, "Elipse," knocked "Harry Potter" off the top spot on the bestseller list - a milestone that still makes Meyer emotional.

"In my head, you know, J.K. Rowling and some of the other authors that I've always loved are in this other place, you know? So this put me up there with the real authors, and that was, you know, a lot."

"Twilight" fans may rival "Harry Potter"'s in their enthusiasm for Meyer's vampire world. The Internet is filled with hundreds of fan sites for her work.

Meyer is a regular visitor. "I like to sort of see what people are saying and how they're saying it. I wanna know people's reactions. Sometimes, that's not always a good thing, you know? There are reactions I'm not expecting, but I just like to know what people are thinking." 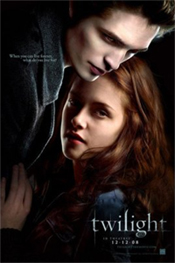 (Summit Entertainment)
More than 69,000 of them are thinking they want to be Meyer's friend on MySpace. She welcomes them all herself, many of them are waiting for another big event in her vampire saga, when Bella and Edward come to life on the big screen in the movie "Twilight" (left) this December. It's a fantasy Meyer says she had right from the start.

"Before I ever thought of 'Twilight' as a book or something I would publish, I was casting it in my head. I was online, you know, like, 'Oh this guy would be good.'"

But for now, the spotlight belongs to Meyer's new novel, "Breaking Dawn." Little, Brown, the book's publisher, has printed 3.2 million copies - the largest in the company's history. It's been an improbable rise for Stephenie Meyer, but she isn't worried about falling.

"Does it ever make you anxious at all thinking, 'Oh my gosh, I'm all the way up here'?" Cobiella asked. "And you know when you're on top it's always a long way down."

"It doesn't make me anxious," Meyer said. "I think you have to be afraid of the fall. And I'm not. I was in a good place beforehand. I didn't really have a Cinderella story because Cinderella is, you know, this abused shut-in, right? I have this great family. And I live in a place I really love. And so my life wasn't bad to begin with. It was already good.

"So if everything goes away tomorrow and no one ever picks up another one of my books and no other movies are made and I just stay in my house, I'm gonna be OK with that. So I'm not afraid of anything."


For more information on Stephenie Meyer's books visit her Web site at www.stepheniemeyer.com.