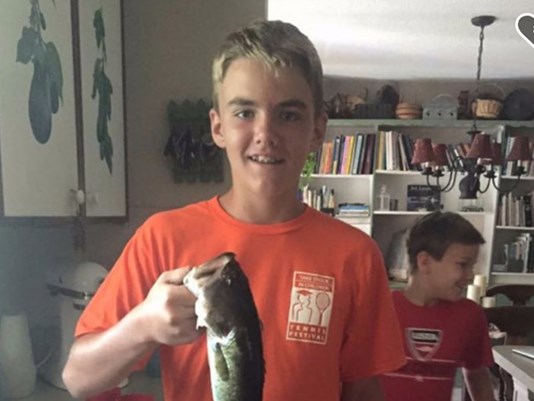 SARASOTA, Florida - Three children from the Brumby family went to the High Noon Gun Range in Sarasota, Florida, on Sunday with their dad to learn gun safety and "how to protect a family."

Instead, they got a tragedy, as one of the kids was accidentally shot and killed by the father.

Police say it was a freak accident that left 14-year-old Stephen Brumby dead. Investigators say William Brumby, 64, was in the last shooting lane with a wall to his right, when a ricocheted shell casing led to him shooting Stephen, while his other son David and his 12-year-old daughter looked on.

In an interview with CBS affiliate WTSP in Tampa, David Brumby described what he saw that afternoon.

"My dad was firing a .22 - just a little semi-automatic pistol. What happened was the ejected casing -- which is super hot -- bounced off the wall and ricocheted down my dad's shirt," David said. "Because it was super hot the knee jerk reaction was to try to brush it off and he pulled the gun hand up and tried to brush it off him and the gun went off into the ceiling and ricocheted into my little brother Stephen."

David told WTSP that his father is struggling with what happened and that the family called in a grief counselor to help.

"He wanted to take us to the shooting range to spend time with us but also teach us how to be a man; how to protect the family when it needed to be protected," David said. "It was just a complete freak accident. I cried so much yesterday that my eyes were stinging."

The family says on its gofundme page that Stephen was "the fourth of seven children and the son of Clayton and Elizabeth Brumby."

The description continues: "In his 14 years of life he was described as 'a meteor that couldn't be contained' by his family or anyone that knew him. He loved fishing, tennis music, archery, and knife throwing. He had an insatiable appetite to learn and was constantly sharing his wisdom with those around him. He was passionate about his Lord and Savior Jesus Christ and dedicated his life to sharing his hope with everyone he met. The families' only comfort is knowing that He is communing with the heroes of his faith and rejoicing in paradise."