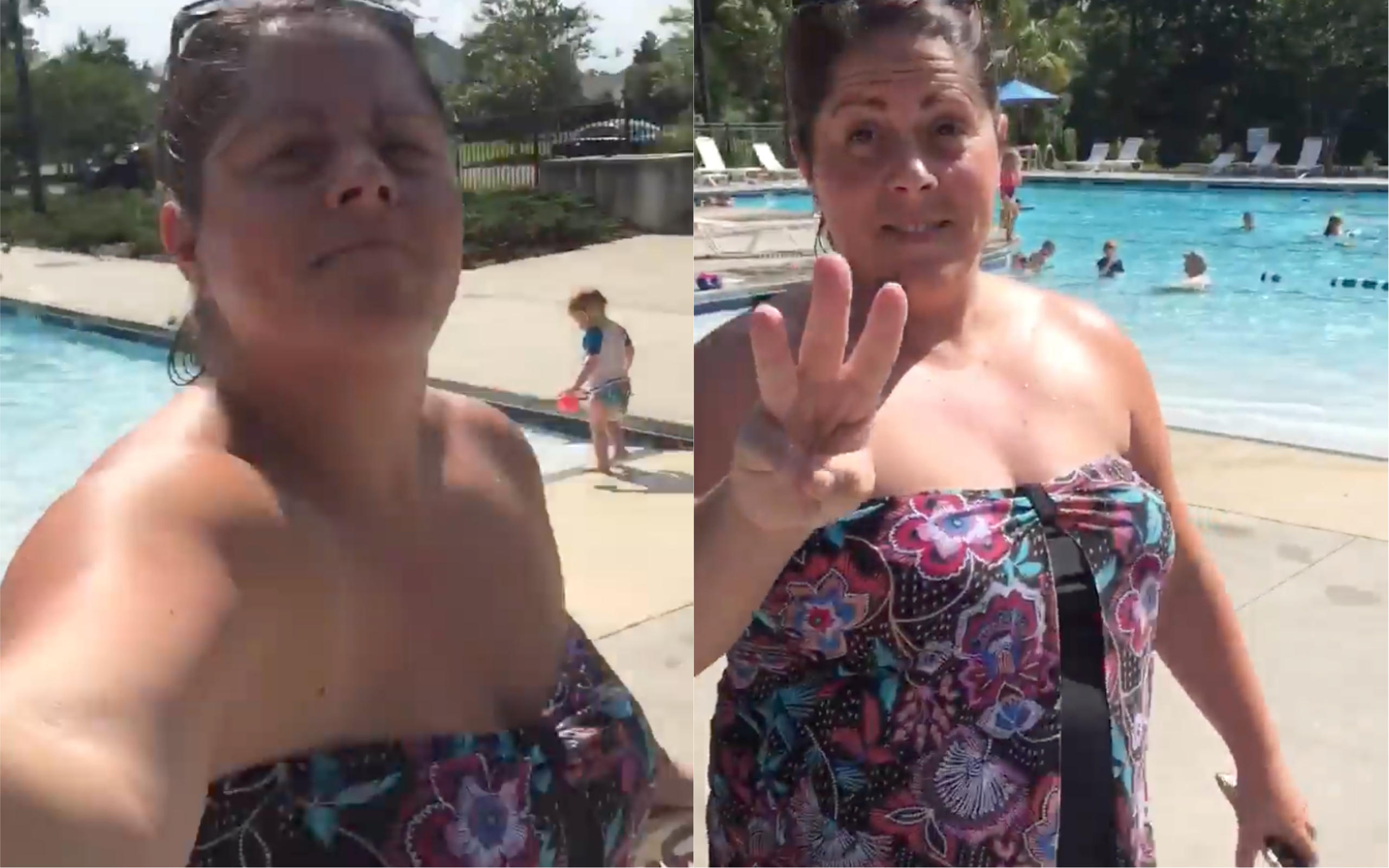 A white South Carolina woman was caught on camera confronting and apparently striking a black teen at a community pool in Summerville on Sunday. The woman, identified as Stephanie Sebby-Strempel, has been charged with one count of third-degree assault and battery and two counts of assaulting, beating or wounding a police officer while resisting arrest, according to court documents, CBS affiliate WCSC reports.

The video of the incident was posted on Facebook by Rhe Capers. The video appears to be filmed by the victim, who told police the woman began calling him and his friends "punks" and using "racial slurs," according to the incident report. Sebby-Strempel allegedly told the teenagers that they "didn't belong" at the pool and had to leave.

The 15-year-old victim also told police that Sebby-Strempel followed him toward the pool exit and hit him in the face twice, which the video appears to show. Video of the incident showed her swinging her arm toward the teen as he records on his phone. She can be heard yelling "Get out! Get out," threatening to call 911 and calling the teens "punks," but no racial slurs are heard on the video. The victim told police that the teens were respectful and began to leave when Sebby-Strempel began calling them names.

The video sparked outrage online, where the woman was dubbed "Pool Patrol Paula," with the hashtag #PoolPatrolPaula. It follows several other widely publicized incidents of white people confronting or calling the police on black people who weren't breaking the law, including a group holding a barbecue in a California park, two men waiting at Philadelphia Starbucks, and a child selling bottles of water in a San Francisco neighborhood.

The swimming pool victim told police officers that he was staying at a friend's house, the report stated. The friend's father told police that they have a family friend who lives in the Reminisce Community, where the pool is located, and the family friend extended an invitation to the teens to go swimming at the pool.

A day after the incident, Dorchester County Sheriff's Office detectives went to serve a warrant for the third-degree assault charge at Sebby-Strempel's address. The 38-year-old woman allegedly pushed one detective into a wall and bit another on the arm, breaking the skin, according to the incident report, leading to additional charges. Sebby-Strempel was arrested and is prohibited from contacting the victims in any way, including electronic contact, court documents state.

Sebby-Strempel was an independent consultant of skincare company Rodan + Fields. The company told CBS News in a statement, "After assessing statements from law enforcement and determining that this former Independent Consultant's actions violate our policies, she is no longer affiliated with Rodan + Fields."

"This is a situation that should have never happened," the victim's mother, Deanna RocQuermore, said at a press conference, according to WCSC. "No child including mine or anybody else's ever, ever, deserves that type of abuse or treatment. ... And to be struck not once, not twice, but three times by someone that is upset because of the color of someone's skin, and they don't belong at their swimming pool."

Sebby-Strempel's lawyer told the judge at her bond hearing, "There are – there is certainly more than one side of the story on that charge."

14 arrested over L.A. smash-and-grab thefts, but none kept in jail
Caitlin O'Kane