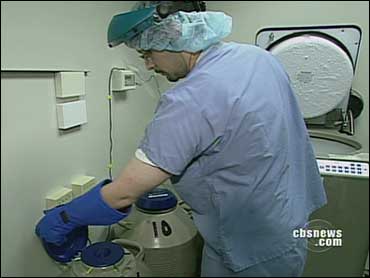 President Obama will also announce a major change in stem cell policy on Monday. His plan will lift long-standing restrictions imposed by former President Bush. The use of stem cells in research has long been a contentious issue, so no surprise that the change is eliciting lots of reaction on both sides of the debate, reports CBS News correspondent Kimberley Dozier.

Researchers say that cures for everything from Parkinson's to paralysis can be found in human embryos.

But under the Bush administration, scientists could not use federal tax dollars, to test that theory.

On Monday, President Obama will change that, with the stroke of a pen. It's the end of an eight-year battle, for Dr. Irving Weissman of Stanford Medical School.

Embryonic stem cells are the body's shape shifters. Scientists believe they can become any cell in the body - nerve cells to repair a damaged spinal chord, or pancreatic cells to produce enough insulin for diabetics.

Under Bush, that research had to be privately funded, which supporters say slowed it down.

Karl Robb has had Parkinson's since he was 17. He's now 42 - and he's hoping Monday's announcement will speed the research up.

"Chronic illness is a race against time," Robb said. "Everyday, everyday you die a little."

"We just want the scientists to be un-handcuffed," said Robb's wife Angela. "We've been waiting eight years and eight years has been way too long."

The controversy with embryonic stem cells: Harvesting them destroys the embryos. Opponents say that's the same as abortion. They also point out there have been major strides using adult stem cells.

It's not yet clear whether scientists will be allowed to create new embryos, or will be limited to using embryos already created in fertility clinics, and no longer needed.

The Robbs say either way, lifting the ban could help the chronically ill live longer, and better lives.

"Don't we owe them something to provide them whatever resources we can to help with either therapies or a cure for their diseases?" Angela Robb said. "I think we owe them that."

"This is going to allow our best and brightest to do the work that needs to be done that hasn't been done for so long," said Karl Robb.

Discoveries won't be announced overnight. Even after the president signs this order, the National Institutes of Health has to rewrite the guidelines. So it could be up to a year before we see any of this new federally-funded research begin.