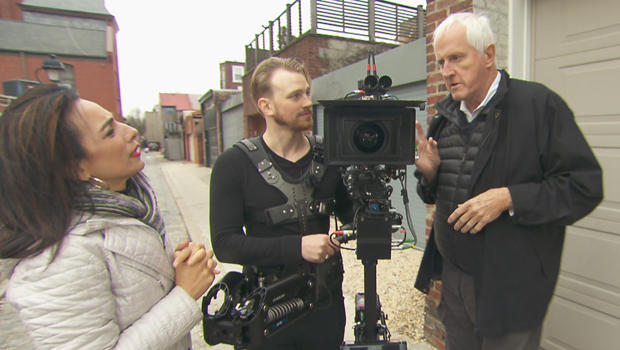 This smooth operator is the man behind many an Oscar-winning film's most memorable scenes. This morning he levels with our Michelle Miller:

Sylvester Stallone had the muscle ... but some of the best moves in "Rocky" belonged to a behind-the-scenes cinematic champ ...

The same who gave us chills with every hotel hallway turn in "The Shining" ...

And also made sure audiences had a forest chase to remember in "Return of the Jedi."

Garrett Brown, a one-time folk singer, revolutionized movies with the Steadicam. He describes himself as an inventor: "I think I'm a better inventor than I ever was cameraman or director."

Wow, but true! Before his creation, Hollywood would get smooth moving shots with cameras placed on platforms called dollies, or rolled on rails. Anything handheld would shake and bounce.

Brown figured out a better way. In 1974, his solution was the camera stabilizing system, or Steadicam, where no matter how you would tilt the camera, the picture will always remain level.

He compared the camera to our eyes: "When you walk around, you know, what you see doesn't jerk around, doesn't jump, does it? We have this wonderful little stabilizer in our heads. The inner ear tells your eye muscles what to do. So, if you move your head up and down, looking at me, [your view remains] stable, right?"

Brown paved the way for Steadicam operators like Michael Craven. "Garrett's invention has given me the ability to express myself through a moving image in a way that has never been possible before," he said. "It's really quite incredible."

In the mid-1970s, Garrett made a Steadicam demo film of his girlfriend (now wife) running in Philadelphia.

Producers took notice. So did the director of a low-budget boxing film.

Miller asked, "If you had never used the steps for the Philadelphia Art Museum in your demo, chances are Rocky would never have run the steps?"

"That most iconic scene might not be there. How do you feel about that? That's an invention!"

Following "Rocky," offers started pouring in for Brown, including from Stanley Kubrick, who asked him to work on "The Shining."

"The maze, yeah, I actually shot almost all the moving shots in that film," said Brown. "All the stuff in the corridors, all the moving. He had in his mind this eerie smoothness. And that, we were able to deliver. That almost turned it into the hotel's point of view."

Next, Martin Scorsese wanted him to shoot "Raging Bull."

"I did the shot with De Niro coming down and into the ring and all that, and it was great. As soon as I started shooting in the ring, Scorsese had his guy pull me over and said, 'You're fired!' I said, 'Why? 'He says, 'It looks too much like 'Rocky!'" he laughed.

The director would give him another chance with "Casino."

"Scorsese did hire me again. Proof!" Brown said. "Yeah, that's one of my favorite shots, actually."

The Steadicam was a game-changer, says University of Pennsylvania media and cinema professor Peter Decherney. "For the first time, you could have a smooth experience of moving through space much more close to our natural experience," he said.

"It allowed the audience member to feel really connected to the experience of the camera," Decherney said. "So, you'd move through space in an almost-embodied way."

Brown, who's 75, won an Oscar for his technical achievement. He had big ideas beyond the big screen. His many innovations include the Skycam, the Flycam, the Divecam. He even has a mini-Steadicam for a smartphone.

And it all goes back to the steps of the Philadelphia Museum of Art, where on the day we visited, kids couldn't resist racing up them, and in a corner boxers sparred.

Miller asked, "Does this ever get old?"

And on this Oscar Sunday, what better way to celebrate Garrett Brown and his creation then by recreating the shot he made famous all those years ago?

To watch a career tribute to Garrett Brown by the Steadicam Guild click on the player below: