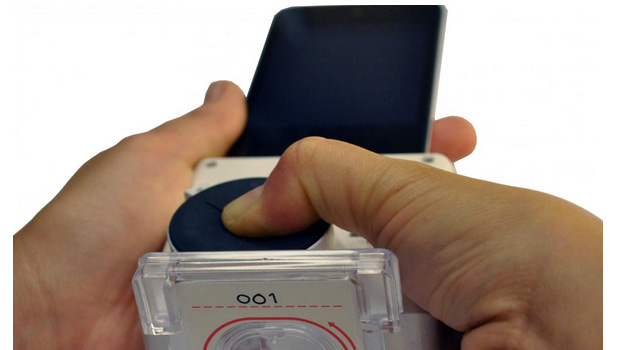 For the last eight years, Samual Sia, an associate professor of biomedical engineering at Columbia University, has been working in Rwanda, where there is a scourge of sexually transmitted diseases being passed from pregnant women to their unborn children.

"The World Heath Organization has identified HIV and syphilis as two of the top diseases needed in a portable blood test for pregnant women," Sia said. "We know that early diagnosis and treatment in pregnant mothers can greatly reduce adverse consequences to both mothers and their babies. By increasing detection of syphilis infections, we might be able to reduce deaths tenfold."

To achieve this, Sia and his team developed a miniaturized version of a standard diagnostic device that works with a smartphone. It plugs into the headphone jack of an iOS or Android phone and requires only as much energy as can be provided by the phone's battery. As such, it untethers diagnostics from hospitals, bringing testing to remote areas where healthcare access is limited and funds are short.

The dongle replicates a type of blood test called ELISA that covers a variety of applications, including identifying markers of infectious and chronic diseases, hormonal imbalances and vitamin deficiencies. Using it is similar to the way diabetics test their blood sugar: a pinprick, a drop of blood, and near immediate feedback. (The video below shows the whole process.)

After prompting the user through instructions on the phone's touch screen, the Columbia device can return results in as little as 15 minutes.

In a pilot study in Rwanda, published Wednesday in Science Translational Medicine, healthcare workers were able to successfully use the device to test 96 patients for HIV and syphilis after only 30 minutes of training.

It's much cheaper than traditional equipment. Sia estimates that the device would cost about $34 to manufacture, compared with the $18,450 price tag of an ELISA machine. That's good for developing countries, as well as the First World.

"We are interested in both global health applications and consumer health applications back home," Sia told CBS News. "There is a tremendous potential to decrease healthcare costs by taking routine testing out of hospitals, into pharmacies and people's homes."