At least some folks of astronomic or poetic bent spent part of last night standing out in the cold STARGAZING. Others did their stargazing INSIDE, staring not at the distant stars in the firmament but at the stars and starlets of Hollywood, glowing in a virtual galaxy of celebrity Web sites. Tracy Smith reports our Cover Story:

On the streets of Hollywood and beyond, non-stop celebrity coverage is serious business . . . and right now, brother, business is good.

According to the online industry tracker
hitwise, there are more than more 1,200 celebrity news sites, from established names like People and Us Weekly, to newer gossip blogs like perezhilton.com, Popsugar, and Starpulse. to name but a few.

Cintra Wilson, who writes for The New York Times, says she thinks fame has been cheapened over the last decade.

"It used to mean that you were a demigod and you were right all the time," she told Smith "Now it means it's open season on you, you're a target, you're not allowed to have any privacy at all, and we're allowed to look in your underwear drawer.

"Everybody wants to know what the latest scandal is, and that creates celebrities in itself," said Wilson. "You can be famous just for being a disgrace."

Harvey Levin, who runs the online newsroom TMZ.com, says being a celebrity doesn't have much to do with talent.

"Not necessarily. It has to do with exploiting the moment," he said.

TMZ has a track record of being first with the VERY latest celebrity news . . . from the trivial (like celebrity fashion faux pas) to the serious (Mel Gibson's 2006 DUI arrest).

"The reason I was interested in this is, very simply, I realized Wow, if you can create a news operation online, you don't have a publishing cycle. You don't have a time period. When you get it right, you get it up," Levin said.

"Do things go up in the middle of the night?" Smith asked. "Do you have things, you know, three o'clock in the morning, that sort of thing?"

"There is no definition to the day anymore," Levin said.

It all used to be much more . . . civilized. Studio publicists would dole out stories to movie magazines. Walter Winchell would give us celebrity details (just not all of them).

Now, online and on a syndicated TV show, TMZ covers everything about celebrities: the good, the bad . . . and the ugly. 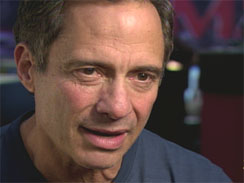 (CBS)
"We break news," said Levin (left). "And if you ask around and you say, 'Why do you come to TMZ,' increasingly what you're going to hear people say is, 'They seem to get the stories first.'"

And last summer, TMZ was seemingly everywhere, after they broke a story that rocked the world.

They reported the death of Michael Jackson six minutes before the coroner declared him dead.

"How do you get these scoops?" Smith asked.

"You know, everybody thinks that there's some secret sauce or that, you know, we're out there with a wallet paying people. It doesn't work that way," he said. "That's not the way Michael Jackson happened. I mean, we have sources, especially in this town, in Hollywood, that we have cultivated over a long period of time now - and you know, for me at least, long before TMZ ever started."

"It used to be that a celebrity could have a secret and be assured that it wouldn't get out," Smith.

"There are a lot of secrets celebrities have that don't get out," Levin said.

Levin, an attorney and former crime news reporter himself, says that celebrities will often give TMZ the story first, because they know they'll get a fair shake.

"With us, at least if we tell it honestly - and that's our calling card. We say to them, 'Look. You know, come to us once. And if we screw you over, you'll do way more damage to us than we will to you, because you'll tell everybody in town what we did.' No story is worth doing that to somebody. And that's our mantra."

"That's interesting, because you know there are people out there who say you get a kick out of ruining people's lives," Smith.

"Isn't that the juiciest stuff?"

"We turn down what you might call the 'juiciest stuff,'" Levin said. "I mean, we turn down so much every day that we just won't do."

According to Levin, TMZ employees are contractually prohibited from breaking the law in pursuit of a story. And in four years of existence, the outfit has earned a kind of grudging respect.

Marc Cooper, who teaches journalism at USC, said, "All journalism involves a certain amount of luck but there's also a great amount of skill with TMZ.

"One can be as critical as they want of TMZ - and I'm quite critical - but TMZ could not exist were it not for the enabling of all the news organizations around them."

"They have great sourcing in the world of police and the judicial system," Sunshine said. "They're very aggressive in trying to find the truth in very complicated circumstances, and they've beaten the hell out of more traditional news sources on a number of occasions. They've also gotten it wrong some of the time."

A case in point: A report about Maya Angelou being rushed to the hospital wasn't true, and a photo TMZ claimed was JFK lounging on a boat wasn't real. But Harvey Levin says TMZ takes pains to get the story right, and on balance they do, such as it is.

A photo of the rear end of reality TV star Bethenny Frankel of "The Real Housewives of New York" was true, though she wishes it weren't.

"My buttocks, yes," Frankel said. "Truthfully, I didn't know that would get out. People want to see people at their most embarrassing moments. They want to degrade them. They want to feel better about themselves."

"Why are they hanging outside that club? To discuss Kirkegaard or ways to feed hungry people in America? No, they're there to catch a train wreck," he said. "Somebody hopefully will be drunk or will say something stupid or will be wearing something suggestive and will be able to be captured for that magic moment. And as much as I'm saying ridiculously kind things about Harvey, his general existence there is to catch the train wrecks."

But one person's train wreck is another's lead story. Harvey Levin says he's not out to defame, only to have fun and entertain a public that won't look away.

"Fun sells the best," Levin said. "If you can have fun with somebody and you can really create something that's clever where people will laugh out loud, fun sells the best, I'm telling you."