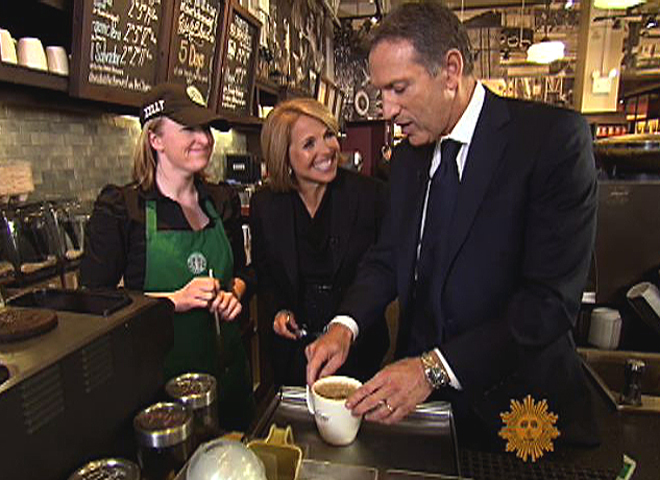 Mix a strong cup of coffee with a forceful personality and the next thing you know you've got your customers ALL ABUZZ. "CBS Evening News" anchor Katie Couric saw that combination at work first-hand at a coffee shop in lower Manhattan:

When you look around a Starbucks, Couric asked the company's CEO, what do you see?

"I see a deep sense of community," Howard Schultz replied. "We've intended, from day one, to really kind of build a third place between home and work. And really, I think at a time in America where people are hungry for human connection, we're providing that."

Wow, that's a tall order for a coffee shop ... unless you're Howard Schultz.

He's a born salesman, a cheerleader on caffeine for the company celebrating its 40th anniversary, having grown a single store in Seattle selling only beans, to a global chain of some 17,000 outlets.

So what's up with the apologies?

"We were never perfect; we made mistakes," Schultz told workers at a 40th anniversary ceremony. "And we will make more mistakes."

Here's what's up: After leading Starbucks through grande-sized growth in the 1980s and '90s, Schultz stepped down as CEO in 2000, to focus on global expansion.

"People around the world, they want the authentic Starbucks experience," he told Couric.

But then, things took a bitter turn.

"In a sense, we were on this magical carpet ride - everything we touched, everything we did, turned to gold. Everything worked," he said. "Growth became a strategy, as opposed to an outcome."

"So, it was all about growth?" Couric asked.

"Wasn't about quality," Schultz said, "And more importantly, it wasn't about the customer or the partner."

"Partner," by the way, is Starbucks-speak for "employee."

It all came crashing down, starting in 2007. Starbucks' profits, and its stock, plummeted.

McDonald's and Dunkin' Donuts poured into the coffee market, and Starbucks' pricey Frappuccinos and lattes collided with the failing economy.

Does Schultz believe he and the company had a "tin ear" about what people were experiencing during the height of the recession, Couric asked.

"You know, maybe they couldn't spend $5 on their coffee every day?"

"But no, for these fancy coffee drinks that people are addicted to, it's a lot more than $1.50," she said.

"Remember, the entire country, every company was going through a financial crisis," Schultz said. "Starbucks was not alone."

Schultz was so worried about his beloved Starbucks going down the drain, that he returned to the top job as CEO in 2008.

He closed hundreds of stores ... a traumatic downsizing for a company that had been all about getting bigger.

As he writes in a new book, "Onward: How Starbucks Fought for its Life Without Losing its Soul" (Rodale), Schultz was also under pressure to cut health benefits for his employees.

Starbucks was an industry pioneer in offering health insurance ... a priority that Schultz says he learned the hard way.

"At a young age, I saw firsthand what it meant to live on the other side of the tracks," he told Couric.

He grew up in a housing project in Brooklyn. His dad drove a delivery truck.

"And in 1960, in the winter, he fell on the job, broke his leg and hip," Schultz said. "And I walked in to the apartment, and saw him laid out in a cast. There was no workman's compensation. There was no salary. Obviously, there was no health insurance.

With that lesson in mind, Schultz pledged to continue providing health insurance.

Then he tackled a series of other problems, like why the breakfast sandwiches were making the stores smell like burnt cheese, and why the partners were hidden behind the espresso machines.

"Primarily, we wanted to remove all of the physical barriers between us and our customers, so that there was direct sightline - they could see everything," Schultz explained.

Schultz says there's a renewed focus now on the product that put Starbucks on the map - Coffee - which puts the pressure on Andrew Linneman, the director of coffee quality.

Every day in the tasting room at the Seattle headquarters, Linneman and his team slurp - and, I'm sorry to say, spit - their way through dozens of cups, taste-testing batches from around the world.

"It's challenging," Linneman said, "because it's already a very intense flavor profile. There's a lot going on. And it's really hard to differentiate between coffees."

These days Howard Schultz - and Starbucks - are again pushing ahead, full steam.

Schultz is back in salesman-mode, showing off a new brewing system that he claims makes the ultimate cup of coffee.

Couric was told that this cup of joe would cost about 30 cents more than the traditionally brewed coffee - about $2.75. "Not four or five dollars," Schultz laughed.

There's a big new deal to market single-serving pods for home use.

And coffee purists, look out: Schultz is pretty excited about his new instant coffee, called VIA.

But for all the coffee talk, have you seen the new logo? There's something missing. That's right: It doesn't say "coffee"... or "Starbucks," for that matter.

Which means Starbucks can sell tea, or nutrition bars, or anything else at your neighborhood grocery store.

"Well, why not just put 'Starbucks Coffee' on the coffee, and 'Starbucks' on the other products?" Couric asked.

"That would be more confusing, Katie," Schultz said. "That's why you're in news and not in marketing!"

But when she asked if he wants to take over the world - "Gonna have, like, Starbucks tennis balls?" - Schultz said no.

"We're not doing any of that," he said. "We're staying within our core, but there will be adjacent products that I think will be complementary to the coffee. That's the story."

And that's Howard Schultz's story: After the bitter and the sweet, he remains a man on a mission ... a mission in which coffee is just the beginning.

"That sounds like a bumper sticker," Couric said. "Do you have that embroidered on a pillow at home?"