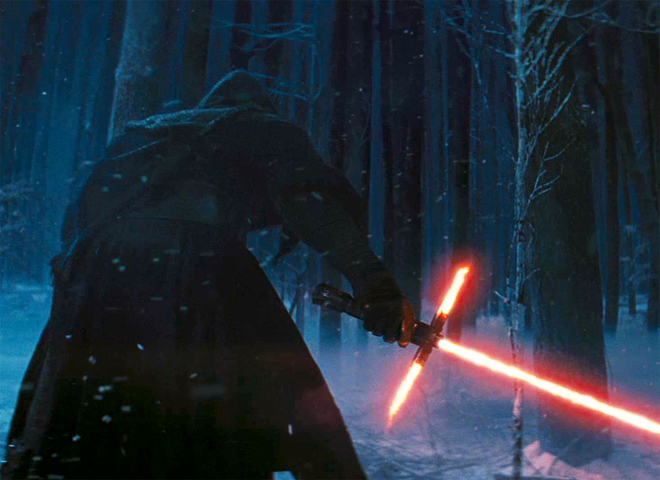 It's here: After much speculation, rumors and fake YouTube videos, we finally have our first teaser from "Star Wars: The Force Awakens."

On Monday, Bad Robot tweeted a note from filmmaker J.J. Abrams announcing a "tiny peak at what we're working on," tiny being 88 seconds of footage that would debut in roughly 30 theaters Friday. It's been released online as well, so we can now enjoy the teaser in all its glory.

The 88 seconds brings us shots of some new cast members, a pretty nifty cross-shaped lightsaber and the Millennium Falcon rising triumphantly as the "Star Wars" theme music plays.

Original stars Mark Hamill, Harrison Ford and Carrie Fisher are not seen, but they'll hopefully make their way into a full-length trailer soon.

The film -- in theaters Dec. 18, 2015 -- also features Oscar Isaac (seen piloting the plane in the teaser), Andy Serkis, Lupita Nyong'o and Adam Driver. It's directed by J.J. Abrams, and set around 30 years after the events of "Star Wars Episode VI: Return of The Jedi."

Without further adieu, here's the teaser:

As the buildup for this teaser grew, we got some pretty impressive fake videos. Let's take a moment to appreciate this nearly two-minute trailer, this trailer, which features an aged Han Solo and this pretty convincing trailer from May. A for effort.