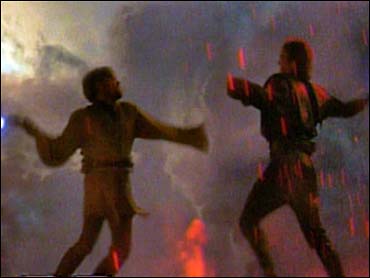 There has never been a more successful filmmaker than George Lucas.
And few movies have had more impact on popular culture than his "Star Wars" films. They basically created a new genre, the summer special-effects blockbuster, and they made Lucas a billionaire.

This May, with the release of the sixth installment of "Star Wars", the saga will finally come to an end after almost 30 years. Correspondent Lesley Stahl reports.

In an edit room at Skywalker Ranch, George Lucas is giving 60 Minutes what millions of fans would kill for: a sneak peek at his last "Star Wars" movie, "Star Wars Episode III: Revenge Of The Sith".

The new film is the last of the three prequels Lucas began six years ago. In "Episode I: The Phantom Menace", Anakin Skywalker was a cherubic 9-year-old boy. In "Episode II: Attack of the Clones", Anakin fell in love.

Now, in the final episode, Anakin succumbs to the dark side, and to his inevitable fate, becoming Darth Vader.

"We're going to watch him make a pact with the devil," says Lucas.

The climactic battle takes place on a sea of fire - lava, actually - on a planet filled with nothing but volcanos.

"Do you actually take us down, in the biblical sense, into hell," asks Stahl.

Before that, of course, it has all the "Star Wars" staples: Jedis, Droids and Wookies. But this is definitely not a kiddie flick.

Most critics hated the first two episodes. But Lucas isn't worried about their reaction. "They haven't liked any of them, really, and they especially haven't liked the last two," says Lucas. "It's like, hey, you know, it can't get any worse."

But doesn't it hurt? "Oh, it always hurts. It hurts a great deal. But part of making movies is you get attacked, and sometimes in very personal ways," says Lucas.

Lucas knows exactly what he wants in his movies. And, critics be damned, he gets it.

He's financing the movie himself, with no studio looking over his shoulder. And he owns Industrial Light & Magic (ILM), the special-effects company where every shot is tailored to his demanding specifications.

When 60 Minutes first visited Lucas six years ago, in the midst of making "Episode I", he said his goal was to make an entirely digital movie. He's now done it, using digital cameras, digital effects, and even digital characters.

Lucas and his wizards at ILM, like animation supervisor Rob Coleman, are leading a revolution in moviemaking. "I think the biggest thing is that we're now doing Yoda," Coleman tells Stahl. "When you were here last, Yoda was a rubber puppet."

For "Episode I" in 1999, Yoda was operated by puppeteer Frank Oz, of "Muppets" fame, just as he had been back in the '80s. But now, Yoda has been digitized.

Fifteen different computer animators helped create Yoda: his body, his clothes, his hair, and that face. Coleman showed Stahl how this was done.

Some of the human actors in this movie also have digital doubles. "I've got a little sequence here where we have a fight with the real guys having a fight," says Coleman, showing the sequence to Stahl.

"George had originally shot it for real in Sydney. He got back to editing, stopped on it. He realized he didn't get the element he needed. He actually wanted the guys with their swords pressed against each other, pressing against each other," explains Coleman.

"He could have gone back to re-shoot this. However, Ewan's not available. He's booked on another film. So George came to us and asked, 'Can you make the guys, in this little section here, can you make them digital?'"

They could, and they did.

Coleman showed 60 Minutes how it was done. "Here's a closeup of them inside the room. We do not have the costumes here, and you can see that the hair right now is just strips of gray material," says Coleman. "Next thing you do, now we do digital cloth. See, it's moving around. Finally, those are two digital guys inside the room."

"So here's the final sequence. There it is," says Coleman. "Right in the middle. Audiences will never know. Well, now they will."

Lucas says there are lot of humans in the film that are completely digital.

And, if the movie-making technology has moved at warp speed in the last six years, Lucas' personal life has changed very little. A single dad, he still spends as much time as he can with his three adopted children: Amanda, 23, Katie 16, and Jett, 12 -- who's already taller than his dad.

"I've discovered that that truly is where the happiness is, you know, at home with the kids," says Lucas.

And his love life? "What love life," says Lucas, laughing. "It hasn't changed much. … I'd love to get married again, but I'm not gonna get married unless it's the right person."

"Are you getting set in your ways," asks Stahl.

"Oh, I'm very set in my ways," says Lucas. "I am difficult. But you know, whomever I'd be interested in now is also the same way."

Back in 1999, Lucas' good friend, Francis Ford Coppola, told 60 Minutes what he thought the problem was: "He has very high standards. I mean, he wants Queen Noor or Grace Kelly or someone. She can't be too tall, she has to be wonderful with her kids."

Lucas' response? "Everybody says the same thing about their friend that's single, which is, 'They're too picky. If they just wouldn't be so picky they'd be married by now,'" says Lucas.

"But I speak for those who are the single ones, to say, I am not picky. But I want someone who's right. And I'm not gonna walk into anything because marriage is a serious thing."

He's set in his ways, but he has had to make changes in his sprawling business empire, with its nearly 2,000 employees. It includes ILM, which does special effects for him and much of Hollywood; Skywalker Sound, used by scores of moviemakers; and Lucas Arts, his fast-growing video game company.

The divisions have always operated independently, until now. "We reorganized to try to get more control over the companies," says Lucas. "This is just saying that, 'Gee, we have a video game company and we have a video animation company. These two companies should actually be talking to each other because they're doing exactly the same work.' And they weren't talking to each other."

Now, they're going to do that. This summer, all the businesses will move in together, for the first time, on one of the most coveted pieces of real estate in America. Lucas' new headquarters is nearing completion at the old Presidio military base in San Francisco.

"They closed the military base, they turned it into a national park, and they said, 'We're gonna let you build – a developer is gonna build one big section of this,'" says Lucas. "And I said, 'What the heck, let's put our name in the hat and see what happens.'"

Lucas eventually won the bidding. How much did it cost? "I think it's about $350 million," says Lucas.

Just a couple of years ago, Lucas built another headquarters complex, called Big Rock, adjacent to his Skywalker Ranch. Everyone working there will now move over to the new headquarters.

Lucas says building is his hobby: "Making movies is what I do for a living. But I enjoy both of them a great deal."

"What if someone else beside you came to you and said, 'I want to make episode seven.' Could you see this happening," asks Stahl.

But there will be other films. He's producing another Indiana Jones movie, with Steven Spielberg directing. Then, he says he'll return to directing films -- but different kinds of films.

"They're going to be small movies. I've earned enough. I've worked enough to be able to fail the rest of my life. And that's what I'm going to do," says Lucas.

"Well, it's what you work for in the end," says Lucas. "I don't think everything should be this big blown-out super kind of movie that I stumbled into. It's definitely not what I meant to do. And I've just sort of followed it to the end."

"You called it a detour," says Stahl.