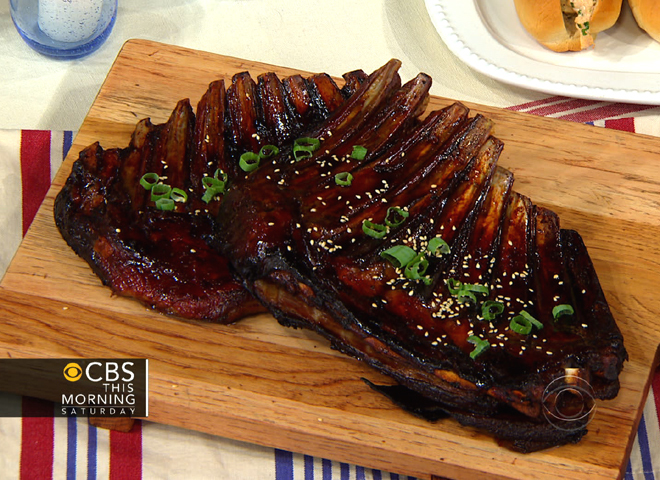 Richard is a past winner on Bravo's "Top Chef All-Stars," and earlier this year was named a "rising star"' by Starchefs.com.

He's the chef and owner of The Spence in Atlanta, and is known for his many inventive cooking techniques.

For July 4th, Richard prepared a truly patriotic dish - a twist on the classic surf and turf - Lamb Ribs and Lobster Rolls.

1. Fill a large stockpot with water, add the peppercorns, bay leaf, and vinegar and bring to a boil over medium-high heat.

2. Place the lobster horizontally on a stable cutting board. Place one hand on the tail and hold it flat on the surface. With the other hand, put the tip of a large, sharp knife about 1 inch behind the eyes where the body meets the top of the tail with the blade facing the head. In a quick motion, press the tip of the knife straight down through the head and bring the blade down to the board to kill the lobster instantly.

3. Reduce the heat under the boiling water to maintain a simmer. Drop the lobster into the water, cover, and cook gently until the shell is bright red, about 15 minutes. While the lobster cooks, fill a large bowl with ice water. Drop the lobster into the ice water and let stand until completely cool. Twist the tail and claws from the lobster, and using kitchen shears, cut the meat out of the shells. (The body and shells can be frozen for use in stocks, soups, etc.) Coarsely chop the meat and transfer it to a medium bowl.

5. Heat a large skillet over medium-low heat. Brush both flat sides of the lobster roll buns with melted butter and place them, flat side down, in the skillet. Toast, turning once, until light golden brown, about 5 minutes total.

6. To serve, divide the lobster mixture into 4 portions and fill the toasted rolls. Serve immediately.

For the "turf" part of Richard's dish, and more of his recipes, go to Page 2.

Lamb Ribs in Malt and Chipotle

1. Preheat the oven to 325 degrees F. Season the ribs on both sides with salt and pepper. In a large roasting pan, mix the malt liquor, honey, soy sauce, chipotles, and ginger together until well combined. Set the ribs, curved side up into the pan and transfer to the oven. Roast until very tender and a knife meets no resistance when inserted between the ribs, 2-1/2-to-3 hours.

2. Remove the pan from the oven. The liquid should be thick and syrupy. If not, put the pan over a burner over medium heat and simmer the liquid until very thick. Glaze the ribs with the sauce and keep warm until ready to serve.

3. To serve, transfer the rib racks to a cutting board, separate into individual ribs, and place them on a serving platter. Glaze them again lightly with some of the sauce and sprinkle the scallions and sesame seeds over the top, if using. Pour the sauce into a bowl and serve alongside the ribs.

1. Fill a large bowl with ice water and set aside. Bring a large pot of water to a boil and salt it generously.

2. With a sharp knife, cut the sprouts lengthwise into thin ribbons (chiffonade). Drop them into the boiling water for 2 minutes, until bright green and tender. Drain and drop the sprouts into the ice water and let stand until cool. Drain well in a colander, shaking excess water from them.

3. Transfer the sprouts to a non-reactive container. Pour in the vinegar, cider, and caraway seeds and cover. Refrigerate for 2 to 3 hours, stirring occasionally, before serving. Brussels Kraut can be stored in an airtight container in the refrigerator for up to 5 days.

Cocktail: Drop the burnt orange wedge in to the bottom of a mixing glass. Add the lemon juice and muddle briefly. Add the remaining ingredients. Add ice and shake well for at least thirty seconds. Double strain over the basil cube.

Basil Cube: Add 1/2 pound fresh, stemless basil to a pot of boiling salt water. Count to five, then remove and immerse the basil in an ice bath. Remove and add to blender with 3 quarts of basil. Blend thoroughly. Strain through a chinois. Pour the resulting bright green liquid to a king cube ice cube tray and freeze.