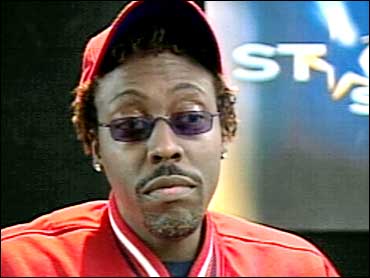 But as CBS News Correspondent Sandra Hughes reports, the realities of war changed the program and Arsenio himself.

It was one of those moments when Arsenio Hall couldn't fall back on his comedy training. So he relied on his heart when war broke out in the middle of the live "Star Search" finale

"I went out and tried to talk to the audience," says Hall. "It was important to talk to them because I was thinking from this vantage point: They don't know what's happening. They're in this studio. And this live show is stopped. And they hear the three-letter word WAR, and I wanted to let them know everything was all right."

Comedy finalist Robert Rothstein had just been judged by the celebrity panel.

"In my mind, the worst thing that could happen would be for me to come out there, do my set, and for the people at home not to get to vote," Rothstein said. "And that's exactly what happened."

Hall was worried, then surprised by the audience reaction.

"And then Naomi reached under her chin, and she pulled the mask off and it was Jesse Jackson," Hall jokes with a laugh. It seems Hall can't contain his sense of humor and doesn't think he should, even in times of war:

"Bush will handle his business, and I'll do what I do best," Hall said. "This is hard. This is hard, because, I'm supporting my president. I'm an American. I don't even eat French toast these days."

Wednesday in Hollywood, the "Star Search" continues. Because of the war, Hall has double duty, wrapping up season two while launching season three.

Comic Rothstein will have to re-do his comic routine.

"I'd definitely say it's a disadvantage, doing it again," says Rothstein. "Because comedy, the second time around, isn't always as funny. It's definitely not an advantage. Hopefully, it won't be too big a disadvantage."

After the comedian and adult singer get their $100, 000 grand prize, it will be lights, camera, action on season three.

That doesn't bother the show's star. He's just happy to be back on stage, doing what he does best and making everyone laugh.