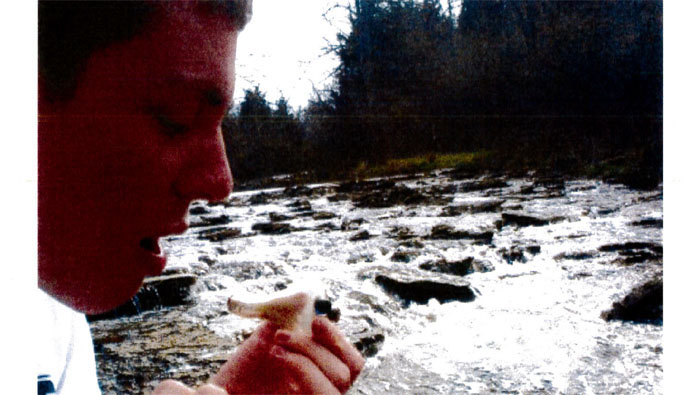 NEW YORK -- Brock Turner, the ex-Stanford swimmer convicted of sexually assaulting an unconscious woman, is allegedly pictured smoking from a pipe in images prosecutors say were extracted from his cell phone. The newly-released images are included as an exhibit attachment to a sentencing memo submitted by Deputy District Attorney Alaleh Kianerci that alleges Turner lied about using drugs in a statement to probation officials.

Turner was sentenced to six months in jail and three years of probation for three counts of sexual assault, but can be released in as soon as three months. Santa Clara County Superior Court Judge Aaron Persky's sentence has led to widespread outcry and a campaign to recall him, though some have defended the sentence.

Turner has also come under fire for his statement to probation officials, obtained by CBS News, in which he blames his behavior on alcohol and the "college lifestyle." In the statement, he also implies he hadn't had experience with partying and drinking prior to the sex assault.

"Coming from a small town in Ohio, I had never really experienced celebrating or partying that involved alcohol," he said in the statement.

A probation report also says Turner denied that he had used drugs.

Several images the prosecutors referenced surfaced Friday as a part of a release of the Turner case file by the County of Santa Clara Superior Court. CBS News had previously obtained Kianerci's sentencing memo. The new images include the photo of Turner smoking a pipe, a close-up photo of a bong, and an image of a person who prosecutors say is Turner's teammate holding a bong. The documents also include a photo of an apparent sexually explicit message sent through the "Group Me" app that investigators saw on Turner's phone the night of his arrest.

The memo includes cell phone records of Turner's text messages, but it doesn't include the "Group Me" message because it was sent from a third-party app and may have been deleted, according to the memo.

Prosecutors say the texts point to drug use, including a Dec. 18, 2014 message in which Turner asks a friend, "Do you think I could buy some wax so we could do some dabs?" referring to a highly concentrated form of marijuana. Other text messages referenced smoking, buying and sharing "weed" and trying to find a "hook up" to buy acid both while Turner was in high school and at Stanford, the memo says.

On Dec. 24, 2014, according to the memo, Turner received a message from a friend that read, "I've got a hankerin for a good acid trip when we get back." Prosecutors say Turner replied: "I'm down for sure."

The memo says he responded to a friend bragging about "candyflippin" - referring to taking LSD and MDMA together - by saying, "I gotta [expletive] try that. I've heard it's awesome."

The memo says on June 3, 2014 Turner's sister asked him via text, "Did you rage last night?" To which Turner replied, "Yeah kind of. It was hard to find a place to drink. But when we finally did we could only drink for like an hour an a half."

Prosecutors say the records show Turner was already an experienced drinker in high school, had routinely smoked marijuana and experimented with hard drugs including LSD, despite his statement.

The memo goes on to blast Turner for blaming his "predatory and repulsive" actions on "drinking, peer pressure and college culture."

In a letter that has since gone viral, the victim in the case calls on Turner to take responsibility for his actions, saying, "assault is not an accident."