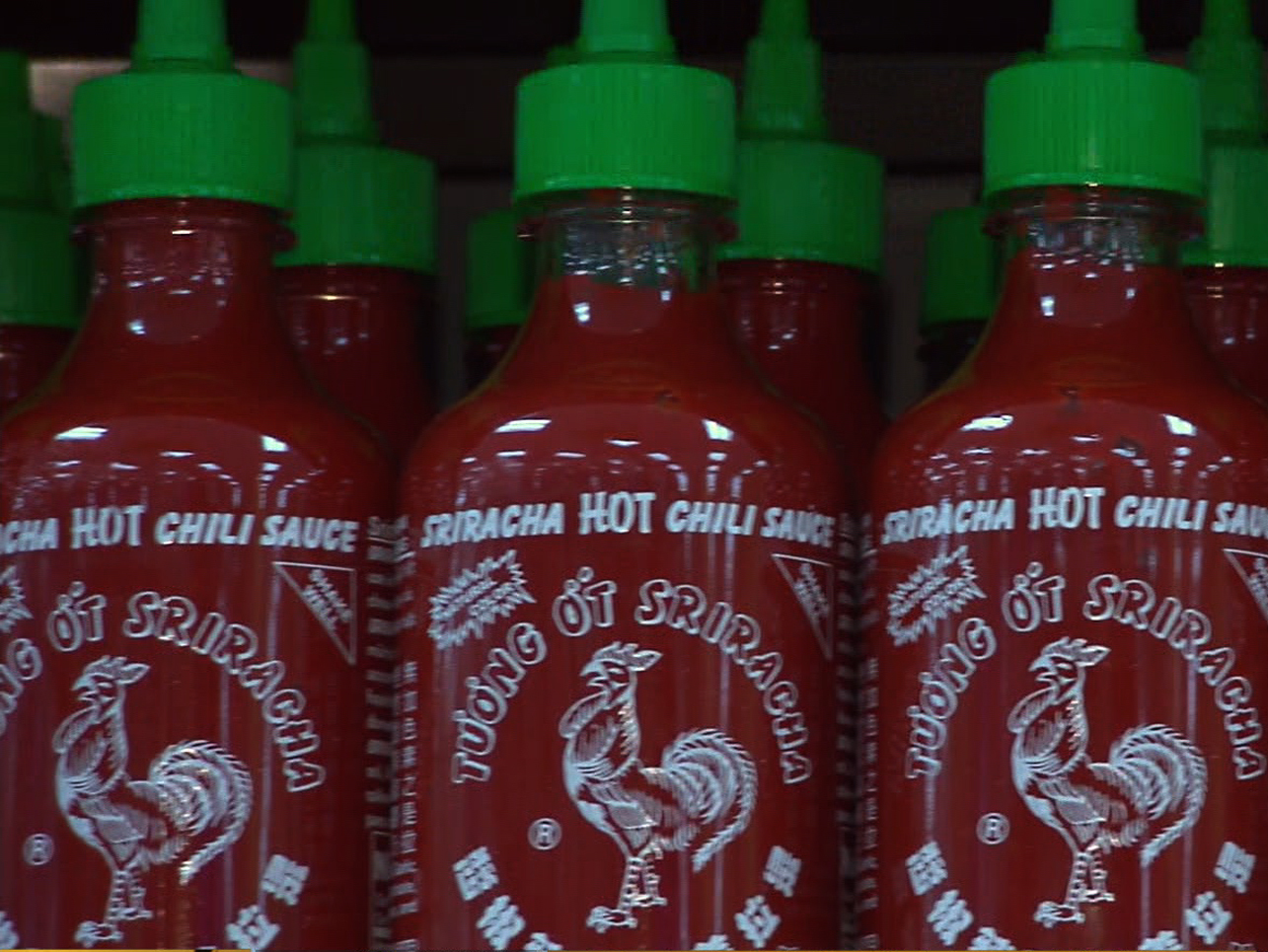 (CBS News) In Los Angeles this past Sunday, the line stretched down the block at the first ever Sriracha festival. There was Sriracha ice cream, Sriracha apples and even Sriracha cocktails. This hot sauce has its own cookbook and has even been named "ingredient of the year" by Bon Appetit Magazine.

Chef Roy Choi started Los Angeles's food truck revolution using Sriracha on his tacos, but he says the sauce is still a mystery.

"There are certain things that have magic and that sauce has magic," he said. "I bet you could get into Fort Knox or the Pentagon easier than you can get into the Sriracha headquarters."

CBS News' Ben Tracy and his team were the first television cameras let inside the brand new $40 million Sriracha plant in Irwindale, Calif. This month is peak production and 200,000 bottles are filled each day.

Sriracha is run by founder David Tran. The rooster on the bottle is his astrological sign.

"If you don't like my product, what happened with you? Something wrong," he said. "We do the fresh one, the best one, the cheapest one."

The main ingredient in Sriracha is a spicy red jalapeno pepper that is grown on a Calif. farm just 70 miles away.

Craig Underwood owns the farm and has worked for Tran for 25 years. They started with 50 acres of peppers and next year they'll plant 4,000.

When the peppers reach the plant, they are washed, crushed, mixed and then stored in blue barrels.

Tran's facility has him in hot water with his neighbors near the plant. This week the City of Irwindale filed a lawsuit asking a judge to shut down Sriracha until they can figure out how to manage the strong chili pepper odor that neighbors say is making them sick.

"We had a bridal shower," said Sriracha neighbor Yolanda Westad. "We had to have the guests go inside because they were all choking, hacking. It was right in the throat."

There's a lot at stake, last year Sriracha sold $60 million worth of sauce and revenue is growing 20 percent each year. Tracy visited Tran's plant before the lawsuit was filed.

"I never thought that we would make big money or do something like that," said Tran. "But keep me busy, always. Everyday make more and more product."

He's been perfecting his product for more than 30 years. After the Vietnam War, David Tran fled with his family to the United States, he started mixing hot sauce in barrels on the streets and sold it to Los Angeles' growing Asian community. He named his company Huy Fong Foods after the Tawainese freighter that brought him out of Vietnam. He grew it without the help of any investors.

"I want to say thanks to the American. They accept me when I refugee," he said. "I try to do something, give back. Give back to American."

Tran says he wants to be a good neighbor and will work with the city to reduce the pepper smell. While he may not be popular with his neighbors, to Sriracha fans this 68-year-old is the hottest thing around.