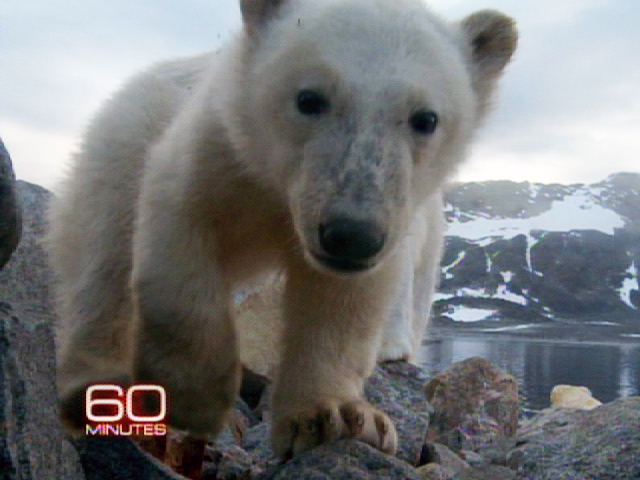 If you've ever enjoyed the sight of polar bears, this story is for you because you're about to see them as you never have before. For this, you can thank the ice-breaking work of John Downer, a British filmmaker who has spent the last two years getting to know them.

It wasn't easy: polar bears frequent the most forbidding part of the planet. It's tough to get there, and once you do, it's really cold. Polar bears are also difficult to spot - white on white is not easy on the eye.

In the past, they had been filmed from a distance, which is advisable as polar bears are dangerous. But Downer wanted to get close up and survive, so he needed new tricks. He came up with forms of surveillance which could make the CIA proud.

Bob Simon's wild kingdom
When it comes to the world of foreign reporting, Bob Simon has been everywhere and seen everything. But it turns out he has a soft spot when it comes to the plight of threatened wildlife. And don't get him started on baby elephants.

Downer's film, "Polar Bear: Spy on the Ice," will air on Animal Planet in the U.S. this coming week. He will take you inside their world and we'll show you how he does it.

You may have seen polar bears shot from a distance, but have you ever seen them up close, just doing what polar bears do? Probably not. And that's because they're not being shot at the end of a long lens - they're being filmed by "spies."

For the last two years, the polar bears have been under constant surveillance, scrutinized by cameras disguised as snowballs, mounds of snow, and tiny icebergs drifting by.

The bears wander right past or up to the cameras, but the nearest cameraman can be miles away.

"60 Minutes" and correspondent Bob Simon headed to the Arctic Circle, chillingly close to the North Pole. We've travelled to remote places before, but never on an icebreaker. We were invited on board by Downer, who has revolutionized the way wildlife films are made. His technique uses espionage - cunning espionage.

"What's the idea of a spy cam?" Simon asked.

"Well, the thing about a spy cam is it actually gets you close to the animals. You're in the scene, you're in the picture. You're picking up a magic that you cannot capture with a normal camera. It is like a secret world," Downer explained.

That is, on ice. But in summertime there is less ice, and some bears get stuck on dry land where they have to scavenge to stay alive. Downer and his crew plant their spy cams wherever they think a hungry chap might pass by. They do it quickly because it's dangerous in the bears' territory. It's illegal to leave your boat without an armed escort; we had two.

"Polar bears see something on two legs and think, 'Well that might be food.' Everything it sees that moves in this environment could be food. And of course, food is everything in this world," Downer explained.

The cameras are triggered by motion and there isn't much motion up in the area that isn't a polar bear.

Produced by Michael GavshonThe partially submerged remains of a whale carcass looked appetizing. Bears were bound to come around even though there wasn't much meat left on the bone.

"I think this is a good shot. You want more rocks. It's all in the positioning," Downer said, while setting up the hidden camera.

"What you need more than anything else is a wild imagination," Simon remarked.

"Yeah. Wild. That's right. And, you know, some commitment to have a mad dream and then carry it through," Downer replied, laughing.

But not mad enough to hang around very long: bears are rather rapid. They can do a hundred meters in nine seconds, which means they can outrun the world's fastest sprinter.

A nearby polar bear was keeping an eye on Downer and the group, and at a certain point it was decided to leave the scene. "I think now is the time to go. The bear is getting closer. We need to get back on board now," Downer explained.

Back in the safety of the mother ship, Downer's technical wizard Geoff Bell is innovating by the minute. Bell had been a model airplane designer for years when Downer realized how useful his talents and his toys could be in the espionage game.

"You've used the word 'toys.' And you started doing this when you were how old, seven?" Simon remarked.

"Yeah. And the only difference, as you know, between men and boys is the price of the toys," Bell said, laughing. "So you know, that's what we do, we're hobbyists and gone into it professionally."

Bell has just perfected what he calls an iceberg cam which does double duty, filming above the water and down below. The camera catches the action when a bear goes under - feet last - to check out that whale carcass.

"It's done exactly what we wanted exactly on time," Downer said, watching the diving bear.

And it was exactly what the bear wanted too: lunch. What her cub seemed to want was to be on camera.

"Don't tell me that she's not mugging for the camera. Full faced shot relaxed, beautiful," Simon remarked, looking at the cub. "I wonder how they would react if they could see they were on television."

"I am sure that (cub) would be very happy to be on '60 Minutes.' Very proud," Downer joked. "This is getting to be a beautiful scene."

But mama bear didn't seem to think so, taking out her disappointment out on the hapless camera, which was bobbing in the water.

This film, "Spy on the Ice" is just the latest in Downer's 30-year career which began with the BBC's Natural History Unit. For his first project, he wanted to capture what it's like to be a bird. That meant flying with one.

So he trained a duck from the time its egg hatched to think of him as its father.

"I was the daddy. I had to take it to the office. It came with me as it was, growing up. It would be in the car when I was driving along. It would even go to the dinner parties. I always had to go everywhere with this duck," Downer remembered.

Eventually he took the duck and his camera up 200 feet up in a parasail. He had never flown before.

"And when we were up at altitude, I released this duck. And within a few seconds it formatted, next to me, and was flying alongside me, literally a foot away from my head," Downer remembered. "And I think very early on in my career, when I flew with a duck, I started to realize, you know, what it's like to be that animal."

What's it like to be a lion? Downer explored that in his film, "Spy in the Den." The stars were not only lions but Sir David Attenborough, the world's most respected naturalist.

Some of its sequences were gained in the most extraordinary way: one remote camera, disguised as a boulder, had been able to go into the very heart of the pride.

And Attenborough says it's not difficult to understand why no one had done this before.

"Most people say it's impossible. And John would say, 'Eh, I wonder.' You know? I mean if someone said to you 'I want a bird's eye view of a bird in flight,' what would you do? Well, the short answer is you go and see John Downer," Attenborough said.

How about tigers, the most elusive of predators? Downer got to four cubs when they were ten days old. It was the first time anyone had filmed them that young. He stayed with them for the next three years.

He did it by enlisting the ultimate all-terrain camera vehicles: elephants. He mounted trunk cams and tusk cams and the tigers were not at all self conscious because elephants have always been part of their world.

And in Downer's world, the gravest sin is to do something that doesn't astonish his viewers. That requires a lot of patience, and a lot of tape: he shoots 17 hours of material for every minute that makes the cut.

"Every time I make a film on a new subject, I want to interpret that animal in a way that hasn't been before," Downer said. "And that's really what drives me. I think if you're approaching a subject afresh and really trying to get new insights, you can never bore the audience."

Africa's famous wildebeest migration has been filmed hundreds of times, but not with a croc cam or a skull cam - or a dung cam, an HD camera smothered in dung. Somebody had to do it - how about the toy man Geoff Bell?

"Geoff had to spread the dung on the camera," Simon said. "Did he get a bonus for that?"

"No. It's all part of the job" Downer replied, laughing.

Downer says his toughest job has been up in the Arctic Circle, because of the hostile environment and the fact that his subjects are so hard to find.

But on the bridge of the icebreaker, he and producer Phil Dalton showed Simon what might just be the most extraordinary polar bear sequence ever filmed.

The snowcams were placed outside a den where a bear stays for six months to give birth to and rear her cub. Then Dalton went away.

"You were 60 miles away from that camera?" Simon asked.

"While this was being filmed. Yeah. I mean, we had no idea it was going on really," Dalton remembered.

When he retrieved the camera and looked at the tape ten days later, this is what Dalton saw: the snow was mysteriously being wiped off the lens, with a paw.

"There's the cub. The first glimpse of the cub," Downer explained, looking at the footage.

"We couldn't have dreamt that we would get something like this. This here, we've got this wonderful situation, here the mother righting the camera. The bears seem to be doing the camera work. And what happens, this is actually quite magical because you feel you really are alone with these bears, in the moment," Downer said.

At one point, the polar bear gave the camera a push, sending it sliding backwards down a hill. It all was caught on tape.

And, miraculously, they not only followed the camera, but the mother also reframed the shot, readjusting the camera with her paw.

"For me this has a certain magic and innocence about it in the way the cub and the mum are just there alone with the cameras in their world. And those little glimpses, and they're wandering off. And this is the start of their journey. You know? Which is gonna be thousands of miles," Downer said.

Probably never to be seen again by the likes of us. They'll just keep wandering, roaming on the ice - as long as it's there.

Why do mass shooters choose the AR-15 style rifle?
Thanks for reading CBS NEWS.
Create your free account or log in
for more features.
View CBS News In
CBS News App Open
Chrome Safari Continue
Be the first to know
Get browser notifications for breaking news, live events, and exclusive reporting.