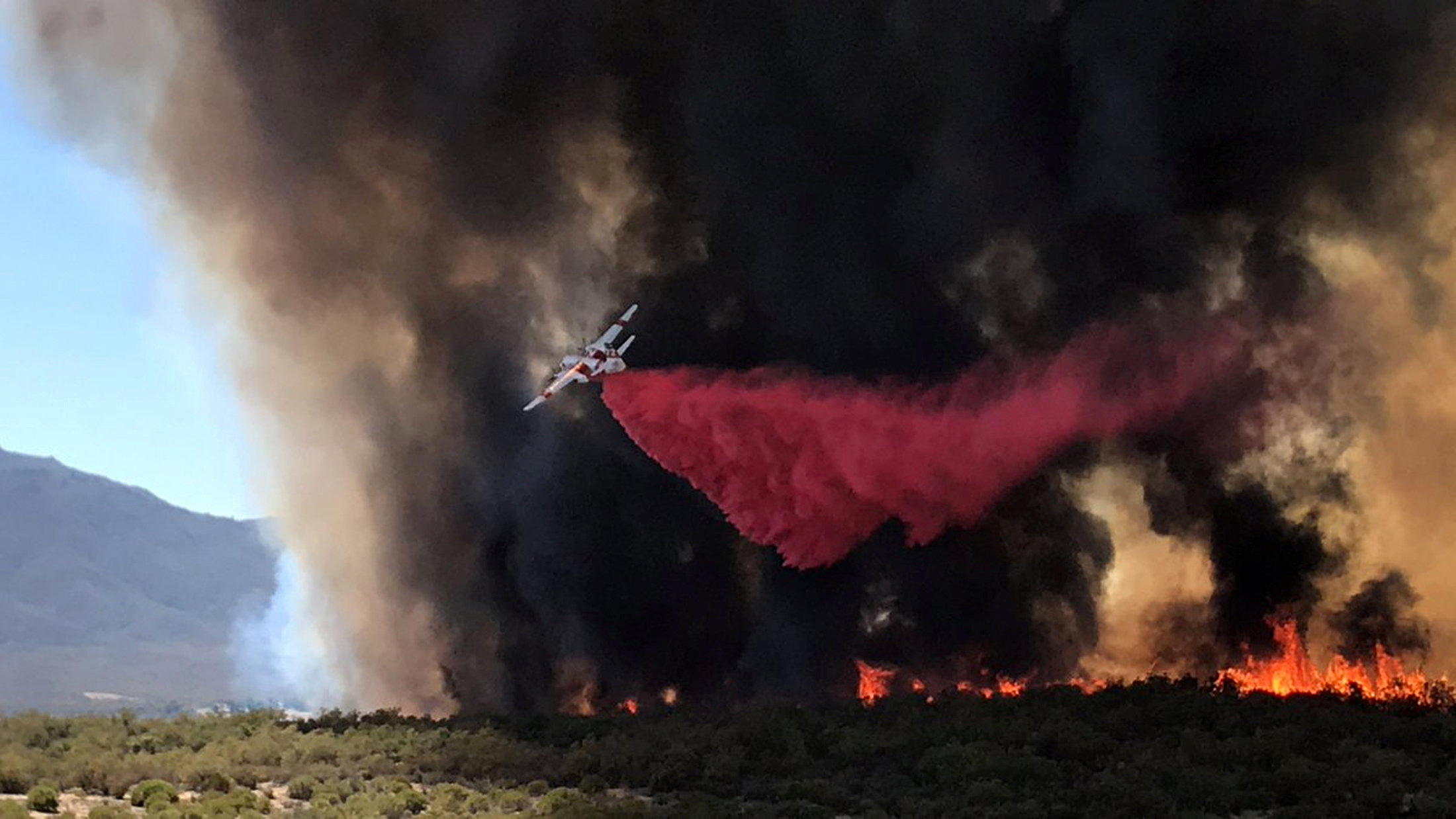 DENVER -- An erratic wildfire charging through extremely dry land in the heart of Colorado ski country destroyed three homes and forced people to flee, authorities said Thursday. Elsewhere in Colorado, a rare high-elevation tornado touched down at the site of another wildfire Thursday but apparently caused little damage and had no effect on the fire.

They were among more than 60 large blazes burning across the United States, mostly in the West, where whipping winds and increasing heat have made it easy for flames to spread.

Fires exploded in Northern California, Utah and other areas, where a prolonged and severe drought has desiccated forests.

In California, an official said Friday that a person died in a fast-moving blaze near the Oregon border.

In Colorado, residents of multimillion-dollar properties, modest condos and mobile homes were ordered to evacuate early Thursday because of the Lake Christine Fire, an unpredictable blaze reported the night before near the town of Basalt. More than 500 homes were affected.

The Eagle County Sheriff's Department said no other homes had been lost besides the three reported earlier.

Smoke from the fire temporarily halted flights into the resort town of Aspen, about 20 miles away.

Authorities believe the flames started after people at a shooting range used tracer bullets, which illuminate the path of fired bullets.

A tornado was reported Thursday south of Fairplay, a central Colorado town about 10,000 feet above sea level. It appeared to touch down at or near the edge of the Weston Pass Fire, which has burned about 17 square miles, or more than 10,000 acres, National Weather Service meteorologist Russell Danielson said.

Tornadoes are rare at that elevation and are seldom seen at any wildfire, Daniels said.

Another Colorado wildfire, the Spring Creek Fire, about 205 miles southwest of Denver destroyed more than 130 homes and forced more than 2,000 people in three counties to evacuate. It grew to about 160 square miles, or over 100,000 acres, Thursday.

Rain was expected in parts of Colorado, which could dampen fires but trigger flash flooding in areas left bare by wildfires.

Hotter, drier weather was forecast in Northern California, where thousands of firefighters were battling a wildfire that was already about three times the size of San Francisco.

By Thursday night, the fire northwest of Sacramento had burned nine buildings and 137.5 square miles. However, authorities didn't immediately indicate whether any homes had been destroyed in the rural area, although about 110 structures remained threatened, according to state fire officials.

The blaze was 33 percent contained.

"The cool weather on Wednesday helped firefighters, but it will become hotter and drier starting Friday and into the weekend, and that will be a challenge," said Anthony Brown, a spokesman with the California Department of Forestry and Fire Protection.

Some of the 2,500 people who were under mandatory evacuation orders were allowed to return home.

Cal Fire spokeswoman Suzi Brady said a person died in a separate blaze near the Oregon border but that she couldn't release any other details because next of kin have not been notified.

Authorities say the Klamathon Fire jumped across Interstate 5 south of the border in California and closed the southbound lanes in that area. The fire started Thursday afternoon.

The Oregon Department of Transportation said Thursday evening the southbound lanes would remain closed at Ashland, Oregon. Motorists were advised to take an alternate route toward California.

California Gov. Jerry Brown declared a state of emergency for Siskyou County, citing "extreme peril" to people and property. There were some evacuations in the tiny town of Hornbrook.

Brady said the blaze is threatening 300 homes near the town of 250 people about 14 miles south of the Oregon border. The fire has burned more than 12 square miles. It was 5 percent contained.

In northern New Mexico, a wildfire closed a ranch where novelist D.H. Lawrence once sought spiritual renewal. Officials said a fire in drought-stricken Carson National Forest has scorched nearly 4 square miles since June 24 and is only partially contained.

Forest restrictions imposed last week closed the University of New Mexico's D.H. Lawrence Ranch, which hosted the writer in the summers of 1924 and 1925 as well as Swiss psychiatrist Carl Jung, author Willa Cather and artist Georgia O'Keeffe after Lawrence's 1930 death.

In Utah, scorching summer temperatures and winds quickly pushed flames through bone-dry vegetation near a popular fishing lake about two hours southeast of Salt Lake City. The 66-square-mile fire near Strawberry Reservoir has burned about 90 structures.

Darren Lewis' family cabin is in the fire's path and he fears the A-frame structure built 46 years ago by his uncle and father has burned, though he's waiting for confirmation.

Lewis, 44, and his extended family planned to spend the Fourth of July at the property in a narrow canyon near a river but instead nervously watched social media for updates from the Salt Lake City suburb of Magna.

More than 1,100 people have been evacuated in the mountain area, and the family hasn't been able to go back since Monday, he said. It is a frequent family gathering spot and has special sentimental value because his father and uncle both died last year.