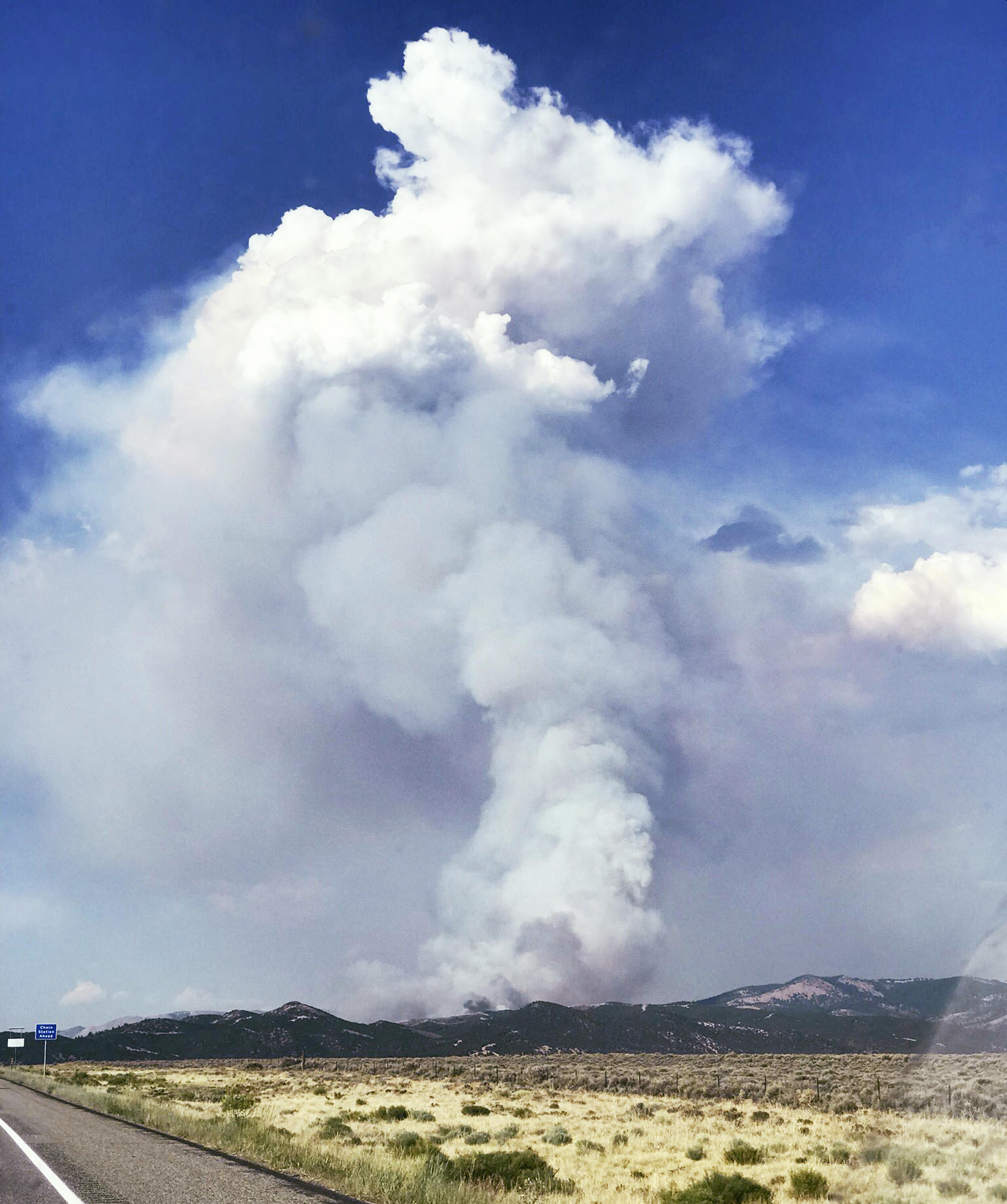 DENVER -- A growing wildfire destroyed more than 100 homes in the Colorado mountains, while other blazes across the parched American West kept hundreds of other homes under evacuation orders and derailed holiday plans.

Authorities announced late Monday that a fire near Fort Garland, about 205 miles southwest of Denver, had destroyed 104 homes in a mountain housing development started by multimillionaire publisher Malcolm Forbes in the 1970s. The damage toll could rise because the burn area is still being surveyed.

Tamara Estes' family cabin, which her parents built in 1963 using wood and rocks from the land, was among the homes destroyed.

"I think it's sinking in more now. But we're just crying," she said. "My grandmother's antique dining table and her hutch are gone."

"It was a sacred place to us," she added.

Andy and Robyn Kuehler watched flames approach their cabin via surveillance video from their primary residence in Nebraska.

"We just got confirmation last night that the house was completely gone. It's ... a very sickening feeling watching the fire coming towards the house," the couple wrote in an email Tuesday.

The blaze, known as the Spring Fire, is one of six large wildfires burning in Colorado and is the largest at 123 square miles — about five times the size of Manhattan.

According to CBS Denver, 52-year-old Jesper Joergensen is accused of starting the blaze. Authorities say Joergensen cooked meat on an outdoor fire pit in the area on June 26 and did not take care to confirm that the embers were out.

Other fires, including one that began burning in wilderness near Fairplay, were started by lightning.

Nearly 60 large, active blazes are burning across the West, including nine in New Mexico and six each in Utah and California, according to the National Interagency Fire Center.

In Utah, authorities have evacuated 200 to 300 homes because of a growing wildfire near a popular fishing reservoir southeast of Salt Lake City amid hot temperatures and high winds. Several structures have been lost since the fire started Sunday, but it's unclear how many, said Jason Curry of the Utah Division of Forest, Fire and State Lands.

Darren Lewis and his extended family planned to spend the Fourth of July at a cabin built nearly 50 years ago by his father and uncle in a wilderness area nestled between canyons and near a mountain river.

Instead, Lewis and his family will spend the holiday nervously waiting to hear if a half-century of family memories go up in smoke because of the fire, which has grown to 47 square miles.

"There's a lot of history and memories that go into this cabin," said Lewis, 44, of Magna, Utah. "The cabin we could rebuild, but the trees that we love would be gone. We're just hoping that the wind blows the other way."

Meanwhile, a wind-fueled wildfire in Northern California was threatening more than 900 buildings south of San Francisco. The massive blaze choked skies with ash and smoke, prompting some officials to cancel Fourth of July fireworks shows and urge people to stay indoors to protect themselves from the unhealthy air.

At least 2,500 people have been told to evacuate as the so-called County Fire continues to spread, said Anthony Brown, a spokesman with the California Department of Forestry and Fire Protection.

Brown said the blaze, which started Saturday and is surging through rugged terrain northwest of Sacramento, has grown to 113 square miles amid hot and dry weather. It was 15 percent contained Tuesday.

"The weather is better than what we had over the weekend. But it's still hampering our efforts and it's an area of concern," he said.

So far this year, wildfires have burned 4,200 square miles in the United States, according to the fire center. That's a bit below last year's acreage to date — which included the beginning of California's devastating fire season — but above the 10-year average of 3,600 square miles.

Because of the Independence Day holiday, authorities are also concerned about the possibility of campfires or fireworks starting new fires because of the dry, hot conditions. In Colorado, many communities have canceled firework displays, and a number of federal public lands and counties have some degree of fire restrictions in place, banning things like campfires or smoking outdoors.

In Arizona, large swaths of national forests and state trust land have been closed since before Memorial Day. Some cities have canceled fireworks displays because of extreme fire danger.

In New Mexico, all or part of three national forests remain closed because of the threat of wildfire, putting a damper on holiday camping plans. The forests that are open have strict rules, especially when it comes to fireworks.

"We're just urging people to use extreme caution," said Wendy Mason, a spokeswoman for the New Mexico State Forestry Division. "We want people to have fun and enjoy themselves, but we prefer they leave the fireworks shows to the professionals."