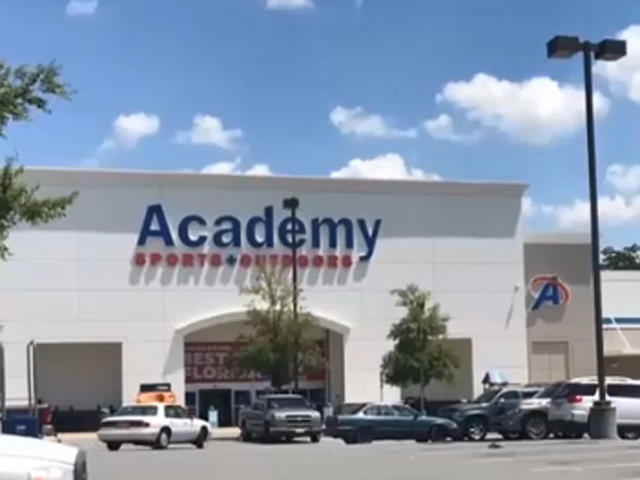 TALLAHASSEE, Fla. -- A store manager who tackled a customer as he ran out of the store with a stolen gun and ammunition has been fired by Academy Sports, reports the CBS affiliate here, WCTV. Dean Crouch worked at the Academy Sports store in Tallahassee.

The National Rifle Association says Crouch is a "hero."

"My employee yelled, 'Stop that man!"' Dean Crouch said of the June 29 incident. "I turned and looked and saw Mr. White running from the gun bar toward the front of the store with a firearm in his hand. At the front door is where I stopped him. I tackled him to the ground. We apprehended him and detained him. We secured the firearm."

Crouch says he was suspended for a week and then fired via conference call. He has e-mailed the company asking them to reconsider.

No one at the store is talking, but employees referred WCTV to the company's corporate offices in Katy, Texas.

"We are grateful that everyone is safe after this incident and for the quick actions of the Tallahassee Police," Academy Sports spokeswoman Elise Hasbrook said in a statement e-mailed to the station more than a week after its initial request for comment. "We have policies in place to protect our team members and customers during a robbery. While this incident ended without injuries, actions inconsistent with our corporate policies were taken."

Arrest paperwork filed with the Leon County Clerk says Jason White asked to see a Glock from inside a glass case and, once the employee handed it to him, began running. The paperwork indicates Crouch "ran after him, making contact (tackling him) just past the first doors."The gun flew out of White's hand and was recovered along with a backpack that contained other stolen merchandise, including two magazines and ammunition.

Crouch detained White in the manager's office until police arrived.

White repeatedly said he would shoot someone, according to the police report, and that they'd see him on the evening news. "Just you wait and see," White is said to have remarked.

Court records show White was released from jail on bond on July 6. Court documents indicate he is on "Supervised Mental Health Pre-Trial Release" and has been ordered to stay away from Academy Sports and Cash America Pawn – from which he is accused of stealing a gun earlier the same day.

There is surveillance video of the incident, according to the police report, but neither Tallahassee Police nor Academy Sports is releasing the video. Neither is the state attorney's office, saying it hasn't been made public yet in the discovery process.

"Our world is pretty much turned upside down after this," Crouch said. "We had to put our house on the market because of this."

The NRA says the firing "is insanity. This man is a hero," said the organization's Marion Hammer. "He stopped an initial crime that would have led to other crimes, and he gets fired. How on Earth is that right?"

Crouch says he's received several job offers in the wake of the incident, but is still hoping to get his job back at Academy Sports.

"I loved my job there," Crouch said.