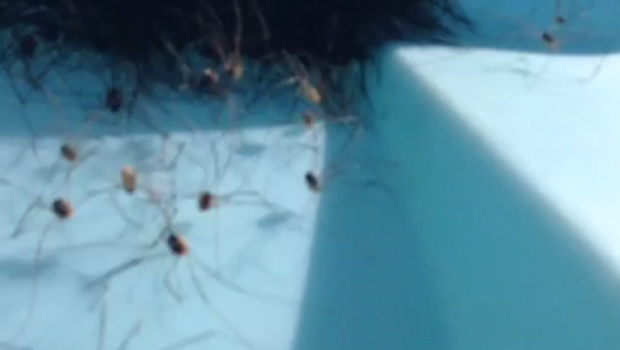 It looked like a harmless pile of dried twigs at the top of a slide. But as Vine user “Paglo” found out, the black mass was actually a wad of spiders. When he poked it, hundreds of spiders scurried away.

Paglo might have had a clue what was coming -- why else would he pull out a camera as he poked the small pile? -- but the more than 103,000 Internet users who have retweeted the Vine video this week were less prepared.

“I thought it was a toupee. And then it became a living nightmare,” Twitter user @metschick tweeted.

“Initially thought it was a moustache without a home,” said @TheSportsHernia.

“Oh my god… I will have nightmares about it,” tweeted @AMadisonMom.

Thousands of others have shared it on Facebook, many with similar comments. The fear of spiders, known as arachnophobia, is one of the world’s most common phobias.

Arachnophobes don’t even need to see a spider to be scared – simply being in an area where there might be spiders, or seeing images  (or Vine videos) of them is frightening enough. It is so common that when studying fear, neuroscientists often use photos of spiders to trigger a reaction in study participants.

Images of snakes, and of other humans with scared looks on their faces, are also used in the studies.

Whether arachnophobia is an evolutionary response to our distant ancestors’ fear of poisonous spiders, or if it is socially conditioned, is yet to be determined.

Whatever the cause, the trait definitely did not evolve in everyone. In the words of Metro UK reader Rebecca Rock, of London, England, “Oh friggin man up they are teeny weeny spiders!!!”

Watch the Vine video below.

The evolution of telephones
Danielle Elliot