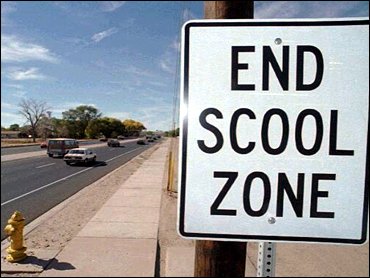 When my kids started school, we were told that it was much more important for them to feel free to express themselves than to worry about spelling everything correctly. At some point in the future, when they were used to writing in a flowing manner, they would get spelling instruction. It wasn't how I was taught, but I accepted it. They're both in college now, and I'm still waiting for that spelling instruction.

As early as first or second grade, I saw that my kids wrote longer and more creative stories than they would have if they had been fussing over the spelling of each word. There was also less anxiety about writing. Maybe they had never heard that there is "a rat" in "separate" or that Y becomes IE when you add an S, but they put concepts onto paper much easier than I could at their age. They were taught to "seize the day," and I wasn't supposed to care if they spelled it "sieze."

It wasn't easy for me to accept the philosophy of "creative spelling," even though I could see the logic in it. Wasn't judging people based on spelling and grammar a very superficial way to evaluate them? I would hate to be judged by my arithmetic skills. What's the big deal if a kid thinks the head of a school is the "principle," or that you write a thank you note on "stationary?" Wasn't it just a leftover kind of snobbishness akin to evaluating somebody's character based on his accent or the way he dressed? Joe DiMaggio dressed and spoke impeccably, but did that make him a better person than the often-unintelligible Yogi Berra? Evidently not. But years of being a spelling bigot made it difficult for me to let go of my prejudices.

I was particularly intolerant of bad spellers when they happened to be my kids' teachers. I often felt as if I should be reading the teacher's report with a red pen in my hand. I understood that some of these teachers grew up in the '80s and went to schools where good spelling was considered as archaic as wearing a tie or a dress to class. I knew that these teachers were wonderful people and great with kids. So, why did it bother me so much if they couldn't spell "recommend" or "judgment?" Because they were teachers!

Apparently, I'm not alone in feeling that spelling still matters. The New York Times recently ran a story about a federal judge denying a lawyer's request for a fee increase largely because of spelling errors the lawyer made. He felt that the lawyer's "complete lack of care in his written product shows disrespect for the court." Among other things, the poor spelling lawyer made a mistake that even members of Generation X, Y, or Z should never make: he spelled the judge's name wrong. So, kids, when you're writing a resume to help you get that summer job, remember — there's only one "m" in Jamba Juice.

Another way that bad spelling can cost people money is through eBay. A recent report revealed that many people who advertise on eBay don't get bidders for their products because of spelling errors. So if no one offers a fair price for a "dimond ring" or a "1985 Buck Riviera," the owner will keep reducing the price until some buyer makes a bid. This group of bad spelling sellers has created another group — people who take advantage of bad-spelling sellers. This predatory group will purposely look for spelling errors, reason that the bids will be low, and then take advantage of those who used "creative spelling."

It's obviously foolish to make broad assumptions about a person just because he doesn't know if it's "supersede" or "supercede." Throughout history, there have been many brilliant, creative, and innovative people who haven't been particularly good spellers. So it's probably about time that society abandon its prejudices against someone who makes a few mistakes with a letter here or there. And yet, I definately don't feel guilty that bad spelling still rubbs me the wrong way.