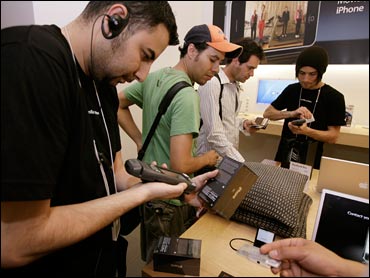 As Apple and its customers work out the speed bumps in what has been one of the most highly anticipated tech product launches in years, software developers are thinking about just one thing: the endless opportunities the iPhone may have for them.

There's no time to waste: software developers anxious to find ways to write and market programs tailored to the iPhone's Web browser will be meeting in San Francisco this weekend – just one week after the launch of the hot new device - at an ad hoc conference called iPhoneDevCamp.

Unlike many high level tech conferences, this one is free – organized by volunteers who say the goal is to bring web designers, developers, testers and iPhone owners together to develop web-based applications and optimize web sites for the iPhone to improve the web experience for iPhone.

The Foundation for Consumer and Taxpayer Rights has sent a letter to Apple and AT&T Inc., the cell phone's exclusive carrier, complaining that customers were being left in the dark about the procedure and cost of replacing the gadget's battery.

The iPhone's battery is apparently soldered on inside the device and cannot be swapped out by the owner like most other cell phones.

Users would have to submit their iPhone to Apple for battery service. The service will cost users $79, plus $6.95 for shipping, and will take three business days.

The procedure is similar to the one it has for the company's best-selling iPod players, but because some users will not want to live without their cell phones, Apple is also offering a loaner iPhone for $29 while the gadget is under repair.

Harvey Rosenfield, founder of The Foundation for Consumer and Taxpayer Rights, contends the iPhone's battery and repair costs should have been clearly disclosed earlier.

The company outlined its cellular service rates and many other features of the iPhone in advance of its launch, which drew snaking lines around stores across the country.

"Some of them might be waking up now, wondering who they got in bed with," says Rosenfield.

Rosenfield says he didn't detect the battery information, which is located under several layers of links on Apple's support page on its Web site, until earlier this week. Technology blogs also started reporting their discoveries of it this week while one of the questions Wall Street Journal tech columnist Walt Mossberg fielded Thursday from his readers was about what happens when the iPhone battery dies.

"The cell phone industry is notorious for not being consumer-friendly while Apple has a fairly good reputation, so for Apple to stand on a technicality of a hidden disclosure - that's going to cost the user as much as 20 percent of the purchase price - I think will prove to be a colossal mistake," says Rosenfield.

In a with CBS News technology analyst Larry Magid, Rosenfield says the consumer group is also upset by the fact that anyone who decides to return an iPhone must pay a ten percent restocking fee and forfeit their $39 activation fee.

The Foundation for Consumer and Taxpayer Rights has gone to court over these kinds of issues in the past. It is embroiled in a pending lawsuit against Cingular, now part of AT&T, over its service termination fees, and is also one of the plaintiffs in a pending lawsuit against Apple over an early model iPod Nano that was allegedly defective because it scratched easily.

In the case of the iPhone, Rosenfield argues that replacing the battery should be free to begin with while the product is under its one-year warranty.

He also questions why Apple chose to go against the norm of what cell phone users are accustomed to - swapping out their own batteries and generally at a cost that is less than half of what Apple is charging now for the iPhone.

"I'm just surprised at Apple's decision to defy the common practice of allowing people to purchase replacement batteries," says Rosenfield. "And the fact that the information is buried is just not appropriate."

Apple has not disclosed how many iPhones were available at launch, though analysts have speculated the amount was 500,000 or more.

AT&T said the gadget had sold out in most of its stores on the night of the launch while many Apple stores ran out of stock by early this week. Those ordering the iPhone online through Apple's Web site on Thursday were being promised delivery would be in two to four weeks.