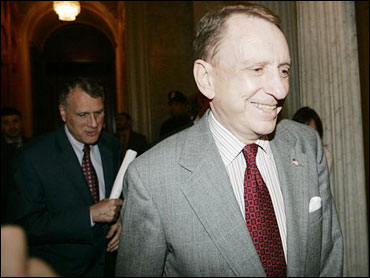 Attorney General Alberto Gonzales has not adequately justified why the Bush administration failed to seek court approval for domestic surveillance, said the senator in charge of a hearing Monday on the program.

Sen. Arlen Specter said Sunday he believes that President Bush violated a 1978 law specifically calling for a secret court to consider and approve such monitoring. The Pennsylvania Republican branded Gonzales' explanations to date as "strained and unrealistic."

The top Democrat on the Senate Judiciary Committee, Vermont Sen. Patrick Leahy, predicted that the committee would have to subpoena the administration to obtain internal documents that lay out the legal basis for the program. Justice Department officials have declined, citing in part the confidential nature of legal communications.

Specter said he would have his committee consider such a step if the attorney general does not go beyond his prior statements and prepared testimony that the spying is legal, necessary and narrowly defined to fight terrorists.

"This issue of the foreign intelligence surveillance court is really big, big, big because the president, the administration, could take this entire program and lay it on the line to that court," Specter told NBC's "Meet the Press."

The Foreign Intelligence Surveillance Act of 1978 established legal procedures for conducting intelligence-related searches and surveillance inside the United States.

Specter said the FISA court "has really an outstanding record of not leaking, and of being experts. And they would be pre-eminently well-qualified to evaluate this program and either say it's OK or it's not OK."

Leahy charged that Mr. Bush misled the public when he said during the presidential campaign in April 2004 that his administration was following the law by getting warrants for wiretapping.

"I think ultimately we're going to have to subpoena them," Leahy said on CBS' Face the Nation, expressing doubt that lawmakers would get the material otherwise.

Under the National Security Agency program put in place after the attacks of Sept. 11, 2001, the government has eavesdropped, without seeking warrants, on international phone calls and e-mails of people within the United States who are deemed to be a terrorism risk.

CBS News correspondent Randall Pinkston reports that the president's defenders say that congressional approval of the war in Iraq gave him the authority for domestic surveillance, and throughout criticism, Mr. Bush has maintained he not only has the authority, but the duty to eavesdrop.

In testimony prepared for Monday's hearing, Gonzales argues that Mr. Bush had authority under a 2001 congressional resolution authorizing force in the fight against terrorism and that heeding the 1978 law would be too cumbersome.

"The terrorist surveillance program operated by the NSA requires the maximum in speed and agility, since even a very short delay may make the difference between success and failure in preventing the next attack," Gonzales said in statements obtained by The Associated Press.

Specter was not so sure.

"I believe that contention is very strained and unrealistic," Specter said. If the FISA law was inadequate, he said, Bush should have asked Congress to change it rather than ignore it. "The authorization for the use of force doesn't say anything about electronic surveillance."

Sen. Russell Feingold, D-Wis., was expected to press Gonzales on why, during Gonzales' confirmation hearings last year to be attorney general, he dismissed as "hypothetical" a situation in which the government conducted warrantless eavesdropping. The NSA program was long in place by then, and Gonzales was White House counsel.

Assistant Attorney General William Moschella, in a letter Friday to Feingold, said Gonzales was referring to as "hypothetical" the idea that Bush would allow warrantless monitoring that was illegal.

That statement is accurate, Moschella wrote in a letter obtained by the AP, because the administration's position is that Bush had legal authority under the 2001 congressional resolution.

In responses to written questions from Specter, Gonzales challenged media portrayals about the scope of the spy program, saying it is not "a dragnet that sucks in all conversations and uses computer searches to pick out calls of interest."

The Washington Post, citing unnamed sources, reported Sunday that the program involves computers sifting through hundreds of thousands of communications to select for human review. The program has resulted in thousands of conversations in which someone in the U.S. has been at least briefly monitored, the Post said.

The Post report said that nearly all of them were quickly dismissed as insignificant and that perhaps no more than 10 solid leads a year have been pursued with further domestic surveillance, usually with a court warrant.

"When NSA goes after the content of a communication under this authorization from the president, the NSA has already established its reasons for being interested in that specific communication," Hayden said on "Fox News Sunday."

In addition to possibly pursuing documents about the program's legal basis, Specter said he might seek testimony from Ashcroft and Comey.

"If we come to it and we need it, I'll be open about it," Specter said, referring to subpoenas. "If the necessity arises, I won't be timid."

Specter also said the administration should tread carefully when it came to using subpoenas against journalists to investigate leaks of classified information. The New York Times in December disclosed the existence of the NSA program, which is classified.

"I think if you move into the area of really serious national security issues, that there may be a justification for it," he said.