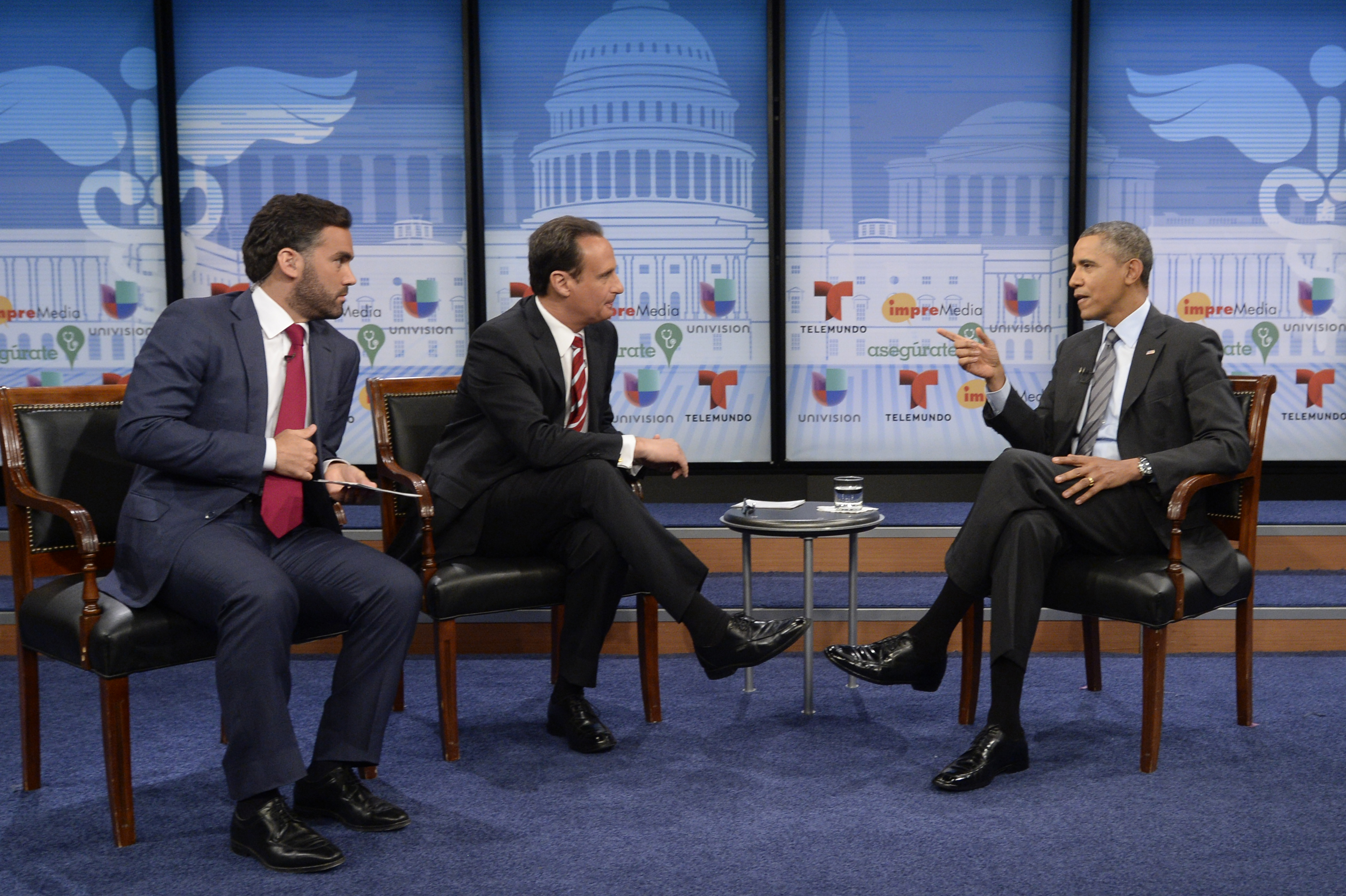 In an interview with reporters from the country's top Spanish-language media outlets Thursday, President Obama encouraged the nation's Latino community to sign up for health insurance in the coming weeks while insisting he won't push back the March 31 deadline or waive fines for people who fail to do so.

But his health care law is becoming intertwined with the national debate about immigration reform, forcing the president to go on the defensive about those policies as well.

One of the first questions for the president during the interview, which was conducted by anchors from Univision and Telemundo, was whether immigrants who came to the U.S. illegally but then had children who were born with citizenship should worry about being turned over to Immigration and Customs Enforcement if they tried to get healthcare for their children.

The president reassured his audience twice that the immigration and health care worlds were entirely separate.

"For everybody out there who is in a mixed family, there is no sharing of the data from the health care plan into immigration services. You should feel confident that if somebody in your family is eligible you should sign up," he said.

The law bars anyone living in the U.S. illegally from purchasing health care on the exchanges or receiving tax credits. They are also not eligible for any federal programs such as Medicare or the Children's Health Insurance Program.

The president also pushed back against some of the rising pressure from the Hispanic community to unilaterally halt deportations. Earlier this week, the head of the National Council of La Raza (NCLR), a supportive Hispanic advocacy group, labeled the president the "deporter-in-chief" for the record levels of enforcement during his administration. Three of the four Democratic senators who helped write the chamber's comprehensive immigration reform bill have also publicly pressed the president to stop deporting the people who would be eligible to remain in the country if their legislation passed.

But Mr. Obama called himself the "champion-in-chief of comprehensive immigration reform and said he has done all he can to reduce deportations without a change in the law. What is still happening comes back to Congress, he said.

"I cannot ignore those laws any more than I could ignore any of the other laws that are on the books. That's why it's so important for us to get comprehensive immigration reform done this year," he said.

As for any other ill will within the Latino community, the president said he thinks people know he is fighting for them.

"You don't punish me by not signing up for health care. You're punishing yourself or your family," he said.

Encouraging the Hispanic community to sign up for health insurance will be critical to whether the law succeeds or fails. According to NCLR, Latinos are the racial or ethnic group in the United States most likely to be uninsured, and in 2009, 32 percent, or 16 million people were uninsured for the full year.

One obstacle that Latinos faced, like all Americans, was trouble with the website. But not only did CuidadoDeSalud.gov launch more than two months later than HealthCare.gov, it was full of awkward translation errors that made it difficult for native speakers to understand.

Still, the president insisted during the interview that 95 percent of the problems with the Spanish-language site are fixed (versus his assessment that 99 percent of problems with the English-language version have been corrected). "If you got discouraged initially, please go back, take a look, and see if you can get the information that you need," he said. Asked about a possible extension for those who had trouble signing up, he responded, "we are confident that anybody out there who is interested in getting health insurance for their families, they will be able to sign up by March 31."

He pushed the governors of Florida and Texas, which both have high Hispanic populations , to go back on decisions to reject the law's Medicare expansion. But even for those who are concerned about cost, the president said health insurance is well worth the price.